Spin and Twist the environment around the world with Crank. Take your opponents in a merry-go-round ride as you spin your way to victory.

Andrea and Lara sit down and talk about Foreclosed's inspiration, story visuals and music!

Foreclosed is a Cyberpunk action-shooter set in a comic book world. Follow the events of Evan Kapnos in this original comic book styled game and discover how losing your identity is all too possible.

Features:
•Slick Cyberpunk Action - Foreclosed blends a striking comic book aesthetic alongside high-octane, cyberpunk infused action gameplay.
•Hi-tech Combat - Modify your Symbiotic Pistol with an assortment of customisations including “Machine-Gun” mode and explosive rounds.
•Firmware Upgrades - Discover and unlock brain implant abilities with an RPG-like skill system
•Interactive Comic Book – Everything from gameplay to cinematics are experienced within the stylistic framework of a graphic novel to make you truly feel like a comic book hero.
•Original Story - Follow the story of Evan Kapnos, his identity recently Foreclosed, stripped of his job, brain implants and access to the city Blockchain. He must now escape the city before his identity and implants are auctioned off…

16 SEPTEMBER 2020 - Developer Alan Edwardes is delighted to announce Estranged: The Departure, releasing on Nintendo Switch in Q4 2020, followed by a later release on Xbox One.

The enigmatic first person adventure game has been in development for six years, designed as a completely standalone sequel to Edwardes' first game, a Half-Life 2 mod. That release, Estranged: Act I, has attracted 6,611 reviews on the Steam platform, 93% of which are positive.

Estranged: The Departure, a self contained story which can be enjoyed completely independently of the original mod, tells the tale of a lone fisherman whose ship is stranded on a mysterious island during a violent storm.

Players will explore a rich, detailed landscape on their attempted escape back to the mainland, encountering puzzles, inscrutable island inhabitants and unraveling a decades-old mystery along the way.

Estranged: The Departure expertly blends a rich first person narrative adventure with gripping action set-pieces and combat. Of the first game, PC Gamer wrote: "It's always nice to see a mod progress from humble beginnings to its own Steam product page, and Estranged is fully deserving of the achievement."

Developer Alan Edwardes said "Estranged: The Departure has been a labour of love for 6 years and has been shaped by its community for the 3 years it was in Steam Early Access.

With humble beginnings as a mod and inspired by titles such as Half-Life: 2, Estranged: The Departure includes traditional first-person shooter themes, with an engaging story and action/adventure gameplay.

I am very excited to bring it to the Nintendo Switch platform, to allow it to be experienced anywhere, any time."

Estranged: The Departure will launch on Nintendo Switch in Q4 with a price TBC.

A remaster of the Mass Effect Trilogy has been floating around the rumor mill for a while, but now the Portuguese retailer Gaming Replay has put full force on the gas.

While it should definitely be taken with a heaping spoonful of salt, the retailer is now taking pre-orders for a Nintendo Switch version of "Mass Effect Trilogy Remastered" with an October 2020 placeholder release date. If the game really is launching that soon, we should definitely be hearing some official news from EA sometime soon.

EDIT: Since the publishing of this article, the retail listings have been removed. Stay tuned for potential updates!

The Secret Order: Return to the Buried Kingdom - more gameplay

The Buried Kingdom in on the verge of collapse. Maintaining the balance between peace and chaos has become almost impossible, as the dragons start to behave unpredictably. Who is behind all the magic anomalies?

Explore beautiful locations, encounter unique beasts, solve riddles, reach the finale of this epic quest, and discover the power of friendship! Get to the bottom of the unexplainable events in the Buried Kingdom and save all its inhabitants in this thrilling fantasy experience.

Play as a strong female character and deal with everything this immersive adventure game has to offer. Unforgettable hidden-objects scenes, challenging puzzles, and - last but not least - the evil Necromancer and his army of skeletons! Get ready for the mesmerizing story of an adventure game you won't forget. Save the Buried Kingdom!

A new patch is now live for Nexomon: Extinction 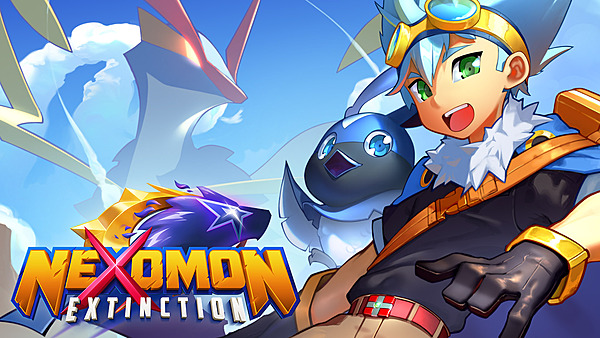 Hi Tamers! We wanted to share the details of a new patch, which is now live across all available console formats.

Notable updates include the ability to nickname a monster from the team menu, a host of new items, the ability to sprint, and a number of fixes. Here’s a full list of everything that has been updated:

- Feature: You can now nickname a monster from the Team menu.
- Feature: You can now reorder a Nexomon’s skills from the Team menu.
- Feature: You can now sprint by holding the B button (Switch).
- Feature: It is now possible to sort all Storage Groups at once.
- Feature: You can now unequip all cores from the Team menu while a Nexomon is selected.
- Feature: New Core, “Synergy Cores” will copy a % of the EXP received by the other team members without having to fight.
- Feature: Added a “Skill Master” character at various locations. She will let you relearn any unlocked skills for a fixed coin fee.
- Feature: Crystals have begun growing in some remote areas. Breaking them will restore your party.
- Fixed a bug allowing the player to open the menu while moving, which could have unexpected effects like having it overlap a wild battle scene.
- Fixed several dialogues that displayed “”.
- Fixed a visual glitch with the playtime counter in the Profile menu which caused it to restart for every 24 hours. This was only visual and no playtime data should be lost.
- Fixed the Database ordered-by-rarity view.
- Fixed the Database ordered-by-name view.
- Fixed an issue with Spanish LATAM during an endgame scene that could freeze the screen in Drake Isles.
- Fixed the skill animation for “Soul Feeder”, which was causing enemies to appear either invisible or faded when swapped.
- Fixed grasses by the desert ruins, which had no encounters.
- Fixed various skills that were not working properly, such as Invincible, Renovate, Blue Mirror and Green Sphere.
- Fixed various Cosmic models that were still using the regular textures, such as Reptomotor or Bomblasta.
- Fixed an area in Haunted Woods that could not be accessed. It is now possible to explore using the Wind power.
- Fixed a few monster description typos, such as Moonline’s and Starckal’s.
- Increased chance of fleeing.
- Status effects are now cleared when a Nexomon faints.
- Added “Running Shoes” item. Having it in your inventory will guarantee fleeing from battles.
- Added “Ultra Pickaxe” item, which can yield 1-3 shards.
- Added “Mining Goggles” item, which lowers the shard respawn timer to 10-15 min .
- Added “Healthy Charm” items. For each charm, the party is restored by +3% HP per battle won.
- Added “Workout Charm” items. For each charm, the party is restored by +3% Stamina per battle won.
- Added “Cosmic Charm” items. For each charm, the odds of finding a Cosmic Nexomon improve.
- Adjusted apparition rates of lower level monsters.
- Adjusted the points in the story when tier-2 and tier-3 monsters start appearing in the wild.
- A few Synergy Cores have been added via chests early game to familiarise new players with this new item.
- Significantly improved apparition rates of wild Tyrants, Extincts and Wardens.
- Added 10 new avatars to pick from.
- The rarity of a monster now appears during battle.
- The evolution level now appears in the database info window.
- It is now possible to cancel an evolution by pressing B and confirming.
- The user can command a Nexomon to rest during battle with the Plus button. This restores stamina.
- “Psy Field” skill fixed as it did not inflict Paralyze.
- Tamers that have been beaten once won’t trigger again on sight. Exception: bandits from the Frozen Tundra.
- The southern Lateria prison guard will now face north as his line of sight seemed confusing.

Harvest Moon: One World coming to Switch on March 5th, 2021

Following delays, we have a new release date!
16 September, 2020 by nintendojam | Comments: 0 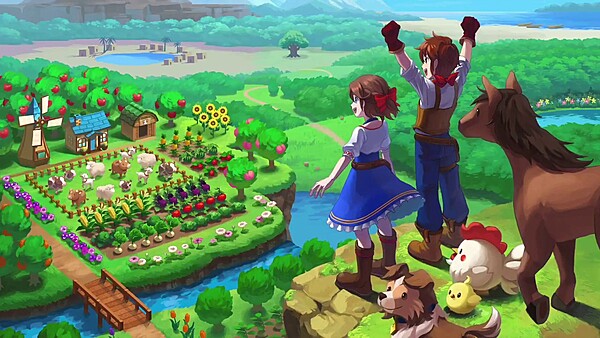 LONDON, UK – September 16, 2020 – Natsume Inc., a worldwide developer and publisher of family-oriented video games, Rising Star Games, video game publisher and long-standing partner of Natsume today announced their latest title for Nintendo Switch™, Harvest Moon: One World, will be launching on 5 March 2021. The game is published by Rising Star Games and distributed by Nintendo of Europe in European countries.

About Harvest Moon: One World…
Before the Harvest Goddess disappeared from this world, she imbued the tiny Harvest Wisps with the knowledge of various seeds, thus ensuring the various fruits and vegetables of the world would not be lost. Using the power given to these Harvest Wisps, you'll unlock various seeds as you progress through the game! But the Harvest Wisps can be tricky to find, as they all appear at different times and places. You'll need to use your noggin to make sure to seek as many as you can of them out!

"Unfortunately, the Covid-19 pandemic has impacted everyone in our world in many ways,” said Hiro Maekawa, President and CEO of Natsume. "Although the current events have delayed the launch of Harvest Moon: One World, we are working hard every day to create a great game that introduces players to a whole new world and promises Serious Fun.”

Can you imagine a world without tomatoes, strawberries, or even cabbage? That's the situation players will find themselves in in the latest entry in the Harvest Moon series, Harvest Moon: One World. Only an old book gives hints of what once was... Buoyed by a mysterious discovery, however, players will find themselves setting out on an adventure that spans not only their hometown but the whole world! What kind of people and places await? From the gorgeous beaches of Halo Halo to the snowy mountains of Salmiakki, there's literally an entire world to explore!

Super Mario 3D All-Stars packs in three classic 3D Mario games from years gone by. Is the collection worth your time, or are these classics better experienced on their original hardware?

Thanks to a translation by JapaneseNintendo, full release info on the Aleste Collection, part of the M2 Shot Triggers series, has been shared.

A Switch physical edition of the collection has also been announced, priced at ¥7,480 in Japan. The digital eShop release will be available for cheaper, coming in at ¥4,950. If you're interested in the nostalgic Sega experience, the Game Gear Micro edition (which includes the Switch version) can also be purchased for ¥16,280, and comes bundled with a limited edition white Game Gear Micro system alongside the Big Window Micro accessory.

Dustoff Z Takes To The Skies on Switch October 15th, 2020

Getting ready for takeoff
16 September, 2020 by rawmeatcowboy | Comments: 0 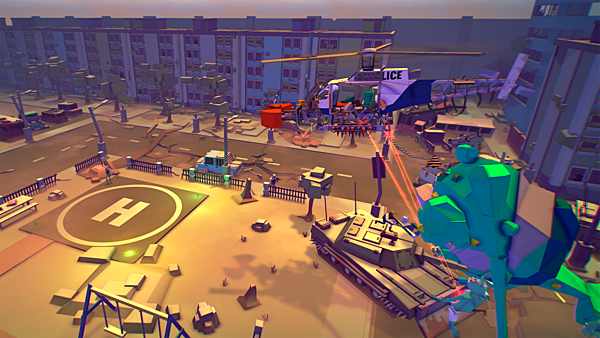 The world as we know it is in ruins. Relentless hordes of the undead have reduced civilization to tiny pockets of survivors that are disappearing by the day. The world has one hope left - a brave and daring police helicopter pilot with a knack for machinery. Pilot helicopters salvaged together from small vehicles to retrofitted school buses and equip them with an arsenal of different zombie-destroying weapons including machine guns, rocket launchers, buzz saws, tesla coils and more.

But, saving the day can’t be done alone. Hire shooters to put those weapons to use, each with their own unique strengths and weaknesses, as you decimate the zombie population, rescue survivors, protect aid-providing convoys, and destroy high-value enemy targets. Use your chopper’s winch hook to haul in and collect supplies, place base defenses, haul the corpses of zombies back to your base for analysis and even use objects in the environment as weapons like battering rams as you deftly maneuver your helicopter through the decimated cityscapes overrun by the zombie hordes.