- 812 million yen ($7.79 million) loss for the three months to Sept. 30, versus a 7.83 billion yen profit in the same period a year earlier.
- cut operating profit outlook for the year through March to 30 billion yen from a July estimate of 45 billion yen

During the six months ended September 30, 2016, we saw strong trends for the global release of Kirby: Planet Robobot. On the hardware side, Nintendo 2DS saw sales growth. The release of the smart device application Pokémon GO led to increased sales of software in the Pokémon series released in the past and drove the Nintendo 3DS family hardware sales growth, particularly outside of Japan. The sales volume for hardware this period was 2.71 million units (19% increase on a year- on-year basis) , while software held steady with the previous year at 19.23 million units sold.

For the Wii U console, we have decided to ship 0.8 million units this fiscal year, based on our forecasts of comprehensive demand for Nintendo hardware. Activity has conformed to our expectations from the start of the fiscal year, with hardware sales volume of 0.56 million units (53% decrease on a year-on-year basis). There were no hit titles this period to compare with Splatoon and Super Mario Maker last year, so the software sales were 8.3 million units (33% decrease on a year-on-year basis). As there were few new software titles offering amiibo functionality, amiibo sales were reduced to 3.8 million units for figure-type and 1.7 million units for card-type. In addition, there were relatively fewer offerings of downloadable content during this period, so download sales were down on the same period last year.

Along with this background, we felt the impacts of a strengthening yen, resulting in an operating loss of 5.9 billion yen against net sales of 136.8 billion yen (of which overseas sales were 97.3 billion yen or 71.1% of the total sales). We have also included 12.0 billion yen of share of profit of entities accounted for using the equity method related to The Pokémon Company and other companies, but we incurred foreign exchange losses totaling 39.9 billion yen, resulting in an ordinary loss of 30.8 billion yen. However, due to the sale of part of our ownership in the company that manages the Seattle Mariners Major League Baseball team, we recorded gain on sales of investment securities totaling 62.7 billion yen as extraordinary income, meaning that profit attributable to owners of parent was 38.2 billion yen.

For the Nintendo 3DS system, we are planning global release of the latest titles in the Pokémon series, Pokémon Sun/Moon, in November, as well as the Nintendo 3DS version of last year’s major hit for Wii U, Super Mario Maker for Nintendo 3DS, in December. We also have a range of strong third-party titles expected during this year.

We have also revealed that our new-concept gaming system, previously referred to using the development codename NX, will be released under the official name of Nintendo Switch. Nintendo Switch offers a wholly new concept as a home gaming system that can switch between different styles of play. We are planning to release it worldwide in March 2017.

We are also bringing back the NES home consoles that were popular in the 1980s in a palm-sized version. Nintendo Entertainment System: NES Classic Edition will launch with 30 well-loved pre-installed titles worldwide in November.

The Company modifies its financial forecast in consideration of a stronger-than-expected yen in foreign currency exchanges, sales performance for the six months ended September 30, 2016, the revision of sales prospects after the second quarter, and gain on sales of investment securities totaling 62.7 billion yen recorded as extraordinary income for the quarter since the Company's wholly-owned subsidiary, Nintendo of America Inc., has sold a part of its ownership in the company that manages the Seattle Mariners Major League Baseball team. 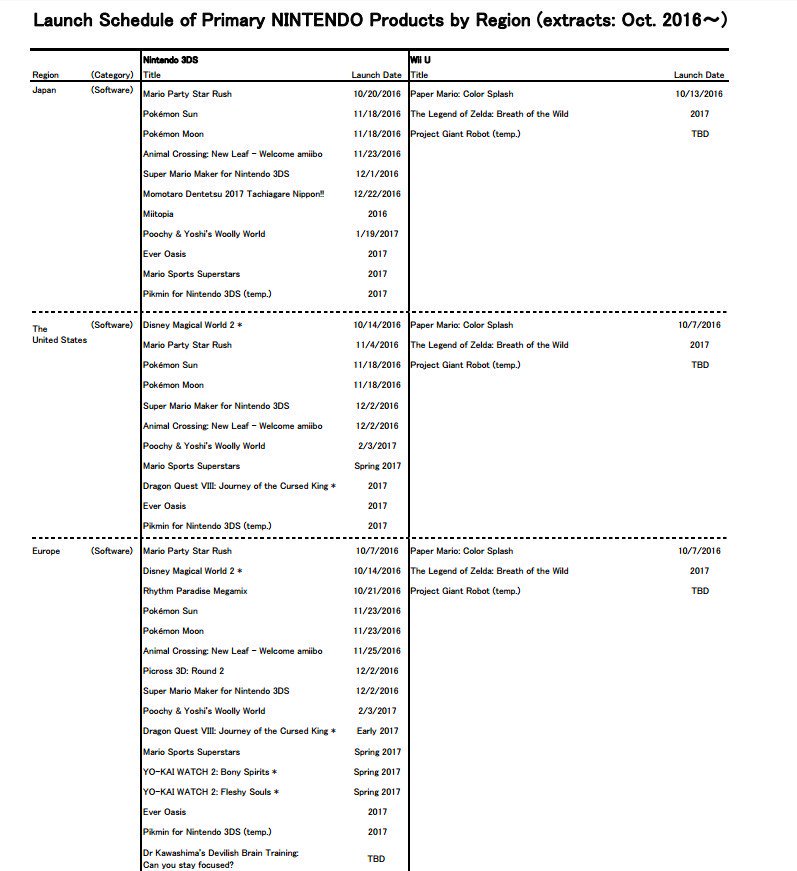