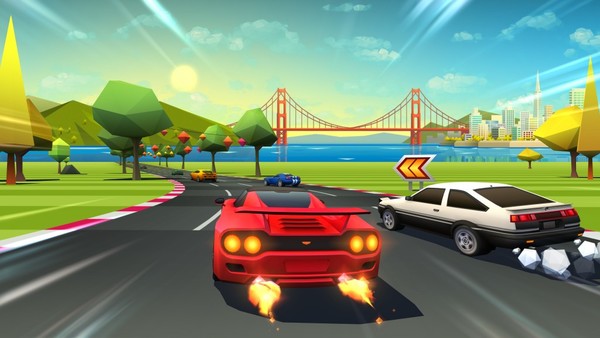 Horizon Chase Turbo is coming to the Switch soon, and it's looking to bring back those warm, fuzzy feelings people get from games like Outrun. It certainly looks the part, and hopefully it plays the part. In an interview with GeekRetro, dev team Aquiris Game Studio talks about the process of bringing the game to Switch.

GR: Your game is coming to Nintendo Switch pretty soon. Was it hard to port it to this hybrid console?

AGS: It was not really hard, but we had to be extra careful about CPU performance, specially. Due to the split screen multiplayer, a lot of code was rewritten to extract the maximum performance from the Switch's multiple core CPU. Since only the GPU is overclocked when docked, this extra work on the CPU was important to ensure smooth performance in both modes, handheld and docked.

GR: Can you tell more about technical aspects of Switch version (resolution, frame rate in docked and handheld mode, etc)?

GR: Is your game going to use any of special Switch functions (HD Rumble, gyroscope)?

AGS: Yes, HD Rumble features can be experienced throughout the whole driving gameplay. Motion controls, unfortunatelly, will not be available.