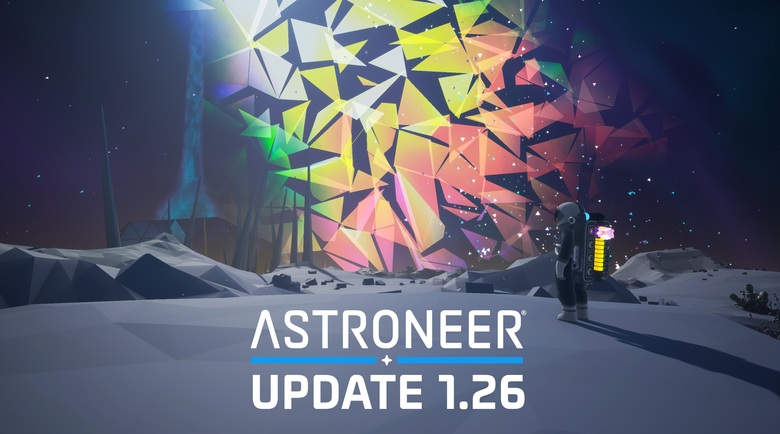 All other versions of Astroneer were already updated to Version 1.26, but Switch owners can finally get in on the action. The Version 1.26 update is now live on Switch, and you can see the full patch notes for it below.

A new vehicle(?) has been discovered in the wild! This curious contraption seems to be an evolution on EXO’s recreational line of enrichment items, ingeniously augmented with a gyro-stabilized control platform in its interior. While simplistic in its appearance, the Gravity Globe harnesses some of EXO’s most advanced technologies, allowing it to roll against gravity (within reason), and even perform small ‘hops’ to clear minor obstacles. Just like the more primitive Recreational Spheres, the Gravity Globe is an ideal enrichment activity for all Astroneers (and other sentient beings, where appropriate).

Gravity Globes can sometimes be found on EXO wreckage: most commonly on abandoned spaceports, but occasionally attached to derelict rover chassis (for what purpose remains unknown). They can additionally be acquired via the Trade Platform.

A new, rare crafting item has been added to boost refinement of valuable resources. This small item is extremely versatile and can be used to process nuggets on-the-go in your Backpack, to bootstrap a new base, or as part of an intricate automated production network.

Portable smelters can sometimes be found on EXO wreckage while exploring or can be acquired via the Trade Platform.

Something… new… has been observed appearing in Abandoned Backpacks found across planets in the Sylva System. It’s unclear exactly what has caused these objects to manifest; further information and experimentation are needed. Caution is advised when interacting with [ERROR!%&#HELPHELPHELP]