A revamp from top to bottom 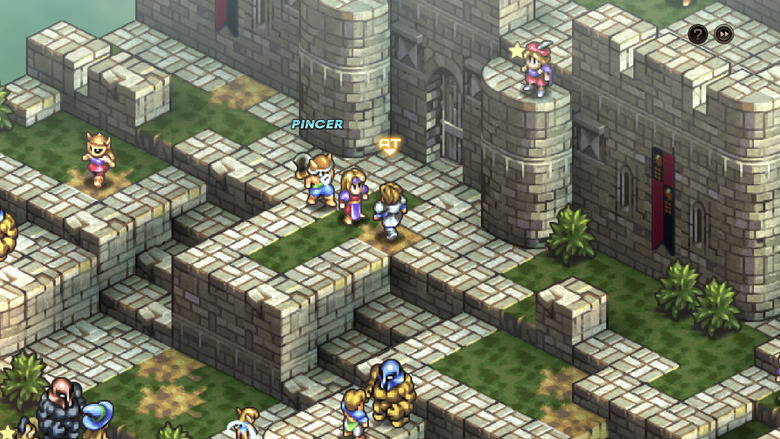 I guess Square Enix felt like releasing a ton of Tactics Ogre: Reborn news today! Earlier we shared a complete breakdown of classes and characters, but Square Enix is back with yet another wave of details. Read on below to see info for unit development, charms, battle updates, balance adjustments, and shop improvements.

Tactics Ogre: Reborn takes the best aspects of the original Tactics Ogre and Tactics Ogre: Let Us Cling Together and incorporates new elements, redesigning the battle system to create a modern game with a more enjoyable gameplay experience.

In this update, we explore changes to the battle system, focusing on changes to units, combat, and shops. We’ll also introduce some of the classes, as well as a selection of characters who play an important part in the story.

In Tactics Ogre: Let Us Cling Together, there were requirements for using equipment such as weapons and armor, consumables such as HP recovery items, and magic. For example, some types of equipment had level restrictions, while others required separate specialty skills to equip.

In Tactics Ogre: Reborn, you can equip and use anything as soon as you find it. However, there are still certain class restrictions for equipment and magic. For example, a knight cannot equip a bow, a cleric cannot equip attack spells, and so on.

Each unit has seven equipment slots for weapons and armor, four slots for consumables, and four slots for magic. Deciding what combination of gear and abilities to bring into battle is more satisfying and fun than ever!

As units gain levels, they acquire special abilities or “skills” they can use, giving each class its own distinct play style in battle. As with consumables and magic, each unit can equip up to four skills, so you’ll have to put thought into the specific combination of skills you want to take into battle.

We’ve also added new skills, and retuned the effects of others to further broaden the range of possible strategies, while maintaining the unique feel of each class. For example, if you attack an enemy standing between your own units, the new Pincer Attack skill will trigger, causing the ally behind the enemy to make an additional attack.

Finishing Moves, Ninjutsu, and War Dances Have All Been Updated!

Units can learn powerful finishing moves by meeting certain requirements. In Tactics Ogre: Let Us Cling Together, finishing moves, ninjutsu, and war dances required the accumulation and use of Technical Points (TP) and sometimes certain reagents as well. Now all these abilities simply require Magic Points (MP), just like magic. With these abilities unified to using MP, it’s much simpler to assess the status of units during battle, and easier to construct a strategy.

Charms Let You Develop a Unit’s Stats the Way You Want!

Charms are new items introduced to give you more control over the development of your units’ stats. You can use charms on the party formation screen to improve and alter your units. Charms can be found during battle, and after battle as a reward.

—Charms allow you to customize your units exactly how you want them, without having to spend time grinding levels.

The battle party screen, used to select and prepare units before sending them into battle, has also gained new features that make assembling your battle party easier than ever. Here, we will introduce two of these features.

The Scout Command Allows You to Gather Information on the Enemy Before Entering Battle!

You Can Now Save Up to Five Different Battle Parties!

By having a variety of battle parties prepared for various situations—such as the number of enemy units or enemy class composition—you can quickly select the optimal party based on information obtained by scouting before battle.

During battle, items called buff cards appear on the battlefield. When a unit picks up a buff card it gains bonuses that last for the rest of the battle, such as increased attack power or critical chance. The bonus gained depends on the type of card found. Your units must vie against the enemy to obtain these buff cards, and how you move and respond in combat to gain the advantage they provide is a thrilling aspect of battle unique to this title.

A unit can have the effects of up to four buff cards at once, and the more buff cards with similar effects are stacked, the greater the effect, dynamically changing the shape of the battle as units acquire more cards.

The enemy considers the terrain, recognizing features such as narrow roads and wide, open plains, as well as the player’s movement, using this information to decide where the battlefront is and choose the best point to engage the player. In addition, how the enemy responds to the buff cards that appear at random creates an ever-changing battle that never feels repetitive.

In addition to the normal battle victory conditions, each battle also has a new bonus objective. Players will be presented with a goal such as “win with a knight in the battle party” or “obtain a buff card,” and if they complete the objective, they will receive items such as charms and equipment to strengthen their forces. Take on this extra challenge if you feel like testing your abilities!

If you want to let the computer control your units, you have four different AI settings to choose from: Fierce Attacker, Stalwart Defender, Distant Striker, and Ardent Mender. You can also quickly toggle between manual and AI control for all your units at once from the battle party screen or during battle!

When firing weapons like bows and crossbows, or casting spells that launch a projectile—such as Deadshot—you can display trajectory prediction to make sure that the attacker can hit the target without misfiring on their own troops.

When enemy attacks reduce a unit’s HP to zero, it is “Incapacitated.” A countdown is displayed above the Incapacitated unit, and the unit can be revived with consumables or magic before the countdown reaches 0. Revived units can act immediately after being raised, allowing them to move, recover HP, or take other actions to regain their footing.

The random encounters that occurred when moving on the world map have been removed. Instead, you can now engage in training battles at specific locations whenever you like. Units cannot be killed in training battles, making the leveling process much easier.

The following are some of the other balance adjustments we’ve made, using Tactics Ogre: Let Us Cling Together as the starting point.

Adjustments were made to the stats, equipment, and skills of each unit, as well as their positions on the battlefield. T

Addition of the Party Level

The party level is the level of your army as a whole, which serves as a level cap for individual units. The party level cap rises gradually as players advance through the story, preventing players from grinding to arbitrarily high levels to brute force their way through battles. The introduction of the party level makes the use of each unit more important, better emphasizing the tactical nature of the game.

Since the party level is set slightly higher than the level of enemy units, it should no longer feel as if the difficulty jumps sharply after leveling up. Players can easily raise their units’ levels through training battles and charms, so even first-time players should find the game approachable.

We’ve optimized equipment, consumables, magic, skills, finishing moves, and debuffs as part of the AI update and with the goal of making the flow of battle simpler and easier to understand. Stats and ability activation requirements have been adjusted, and there have been additions and removals in all these categories where appropriate. The rogue class is also reserved for enemy units now.

Make the Most of Valeria’s Shops!

Shops, which are essential to progressing through the game’s battles, have been improved to provide a smoother experience, allowing players to easily buy and sell equipment, consumables, magic, and other items, as well as hire new units.

When buying or selling equipment, you can quickly check information such as the current number of items in your inventory and which units have them equipped.

Crafting, which enhances the performance of equipment and consumables, now succeeds 100% of the time, eliminating wasted ingredients and the need to redo failed attempts. In addition, a convenient function to craft multiple items at once has been added.