When You FINALLY Learn How To Play A Card Game

Learning to Play the Pokémon TCG Through a Game Boy 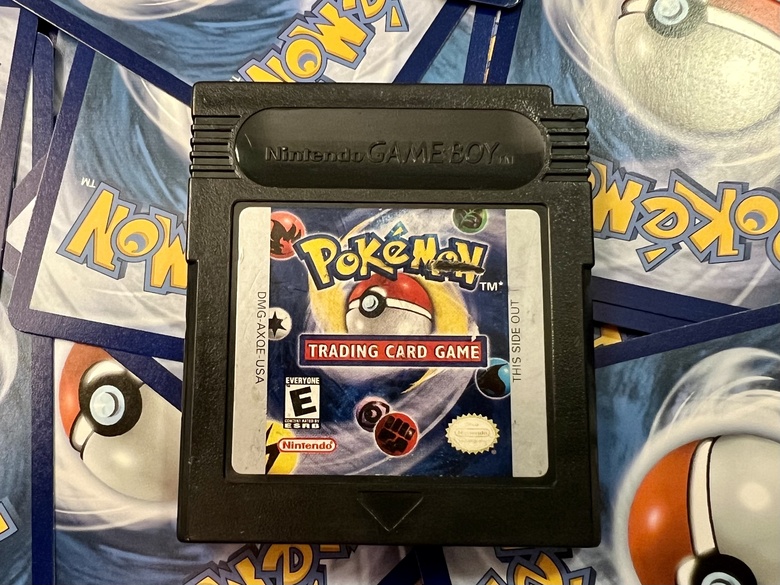 On January 9th, 1999, the United States was formally introduced to the Pokémon Trading Card Game (PTCG) and parents have been angry ever since. All over the country, kids were begging and pleading with their parents to buy them Pokémon cards and starter decks. These packs flew off the shelves and became more valuable than gold, especially if you were the lucky kid who pulled a Charizard. My younger brother and I weren’t helping, as we constantly schemed and pooled our money together to try and buy a few more packs for the both of us. We just wanted to collect the cards like every other kid we knew! Pokémon card collecting was the “It” thing at the time; all we cared about was who had what card. No one on the playground knew how to properly play the PTCG, and I wouldn’t learn until 23 years later.

When my brother and I would get a hold of cards, there were times we tried to learn how to play. Sadly, we would let one little obstacle ruin our quest to become PTCG masters; the dang instruction booklet. Back in the day with the Fossil and Jungle sets, our parents would buy us both starter decks so we could learn how to play. Yet, when we would open these starter decks and read the rule booklet, there was a line in the beginning that said something like, “These are the ADVANCED rules for the Pokémon Trading Card Game. DO NOT read this book unless you’ve played the Pokémon Trading Card Game a few times.” This had us both stumped because how could we learn how to play if we didn’t know how to play?! We even asked our parents to read it and teach us, but that was futile, as they didn’t understand anything the rule book was trying to tell them. With that, we just gave up trying to learn how to play and stuck with collecting. In our defense, we were young (about 9 and 8 years old respectively) and didn’t have a full grasp of the nuances of Pokémon… yet. 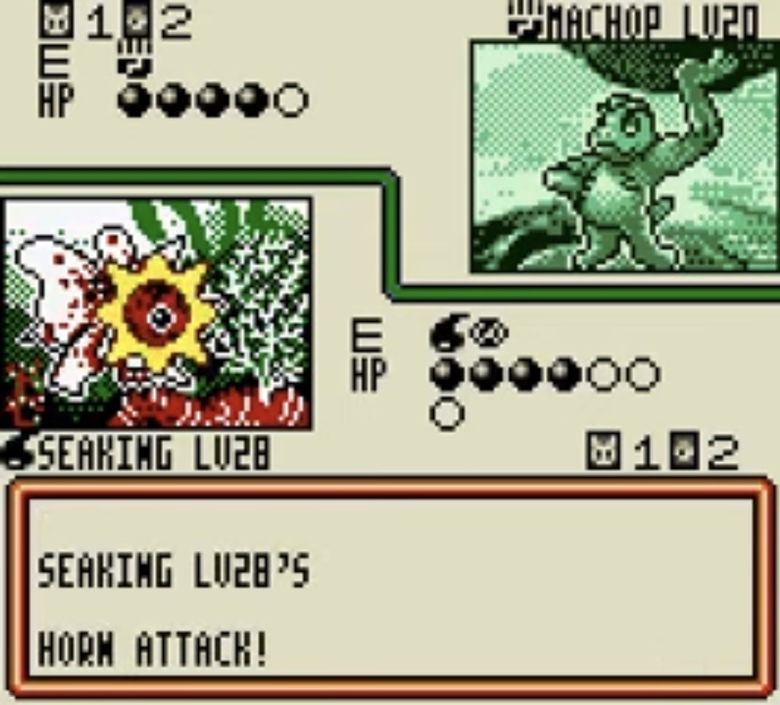 Out of all the games I picked up at Portland Retro Gaming Expo 2022, the Pokemon Trading Card Game is the one I’ve been playing the most. It’s been on my list to pick up for a while, and I’m glad I did. I just wanted to try the game out and see if it sparked something in me that piqued my interest. I’ve played TCG video games before (mostly Yu-Gi-Oh) and they never really stuck with me. This is usually due to the mechanics in the video game being different from the physical card game, or the difficulty spike being too high. Even when full-length games have a TCG in them, I only do the quest required to move forward. With the Pokémon Trading Card Game, something completely changed from the second I plugged the cartridge in. This game is an amazing tool to learn HOW to play the PTCG in real life. The developers knew this, as did the marketing team. There was a commercial made for the game where the younger brother learns how to play thanks to the videogame, and then he takes down the older brother. Seriously, you can watch it right here. 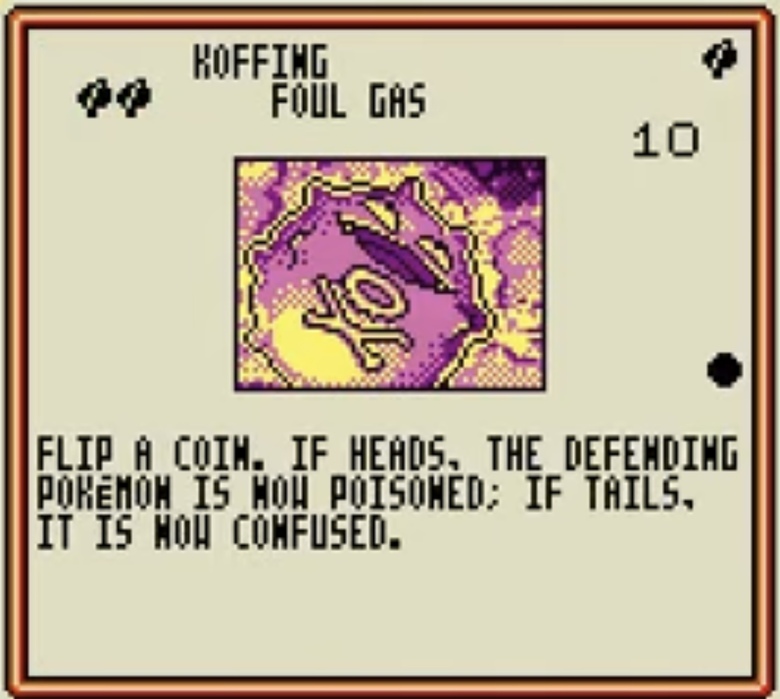 How the text on the cards is displayed in game.

Even if you were to buy the game loose without a manual, it will still teach you how to properly play the PTCG step-by-step. The tutorial is very simple to understand and you can keep playing with the practice deck until you’re comfortable with how things work. Once you’re confident in your new abilities, you get to pick a deck built around a Kanto starter and go out into the continent to challenge the 8 Club Masters. Once you pick your deck, you can freely go to any Club right from the start. I chose the Charmander starter deck and made a B-line to the Grass Club to utilize the type advantage. While I lost a few of my opening duels, I eventually found my groove with how the game works, and even made some great comeback victories.

While the game is a great tool to learn how to play and get used to the mechanics and strategies of the PTCG, we must remember this is a Game Boy Color game from 2000. There are some limitations to the game that do hinder it slightly. This impediment mostly relates to getting new cards for your deck, as the only way to gain them is by dueling NPCs. After each victory, you are gifted 2 booster packs with a myriad of cards. Just like in real life, there are different “sets” and packs containing different cards, and each NPC gives out different sets of card packs. There is no limit to how many times you can duel the same person (and you can re-challenge the Club Masters too), but this is where you need to start praying to RNGesus. The cards are random and you may not get the card you NEED to make a certain deck perfect for a certain club. There are deck-building machines back in the Professor’s lab that unlock opponent’s decks, but you need the cards in your inventory for the machines to make said decks. Along with this, there’s no card shop for buying or obtaining certain cards. Even if all you need are Energy cards, you’ll have to duel a technician in the Professor’s lab to earn a booster pack ONLY containing Energy cards. The RNG gods may also look down upon you with bad hands and drawing cards you don’t need, which does happen and can ruin a duel for you quickly. 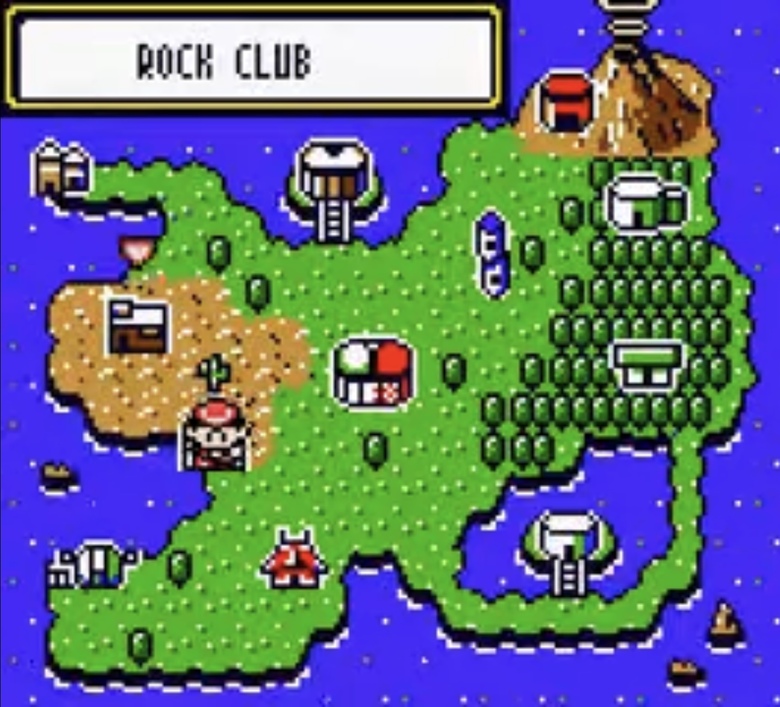 The World Map. You can go anywhere from the start of the game.

While the RNG elements make deck-building a pain, I still find myself enjoying the game immensely. Even when I would lose a match in a new club, I would think of other cards in my arsenal that would better suit me and get to building. Not only that, I can take a look at my newer Pokémon cards and understand what the text is saying. Even with the PTCG being over 25 years old, the basics are taught excellently in the original Game Boy game. There is a video game version of the modern TCG that you can download from the official Pokémon website and play with players online, but in THAT version you’ll need to do more work (and possibly spend real money) to get booster packs to enhance your deck. It is an online game after all, but it will still teach newcomers how to play the game with modern rules.

Part of me is relieved that after literally decades of loving this franchise, I finally understand one of the core aspects that made this franchise so popular. My playing led me down a rabbit hole of Youtube videos about the PTCG, and I’m getting the urge to start collecting and even playing IRL. Thankfully, a loose cart of the Pokémon Trading Card Game isn’t very expensive. While I paid a little bit more than the average PriceCharting gives, the game is still cheaper than a traditional Pokémon game. If you don’t want a physical cartridge and you still have some funds in your Nintendo 3DS or Wii U wallet, the game is available there as well. If you’re like me and have been with Pokémon since the beginning, yet never learned how to play the game, I’d highly recommend playing the Game Boy game to learn the basics. It’s easy to understand, the classic Pokémon are there, and it’s flat-out fun!

[Screen shots from World of Longplays] 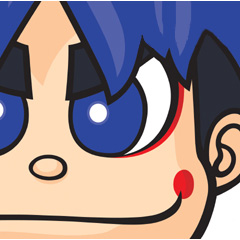