Fortnite: Chapter 4 is the perfect time to jump in 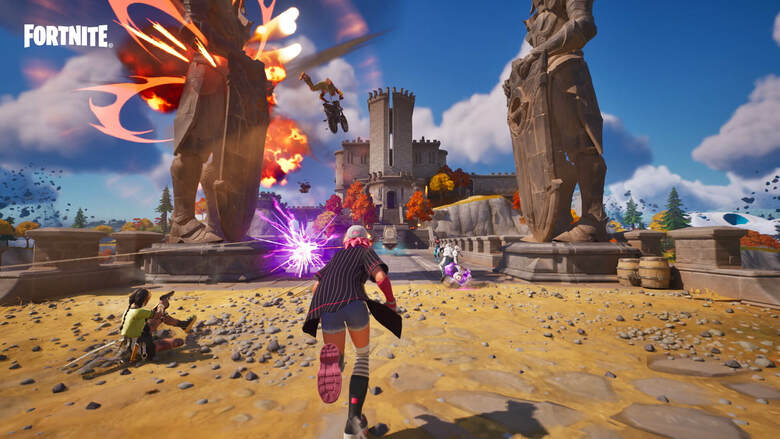 Those who follow GoNintendo closely might know that I’m a big fan of Fortnite. I say that without an ounce of ironic intent behind it, too. I played Fortnite when it first came out, dropped off for a bit, and then returned in 2019. I’ve been playing Fortnite on a weekly basis ever since, and it has easily become my most-played title every year after.

I know it’s fun to ‘meme’ on Fortnite and throw insults at it, as that’s how things work when they reach a certain level of popularity. Anytime a piece of entertainment drops (be it a book/movie/tv show/game) that absolutely blows up to an astronomical level, a select group of people derive insane pleasure from considering themselves above it all. They mock those that play, call the piece of entertainment garbage, and generally crap all over anyone who’s having a good time.

While that kind of attitude has always upset me, it’s never stopped me from interacting with the things I enjoy. That’s why I’ve stuck with Fortnite for so long, as for me, it remains as fresh as ever 5+ years after its launch. That has never been more evident than with the launch of the fourth Chapter of Fortnite, which just launched last week. If you’ve never played Fortnite or you’re a lapsed fan, there’s no better time to hitch a ride on the Battle Bus. 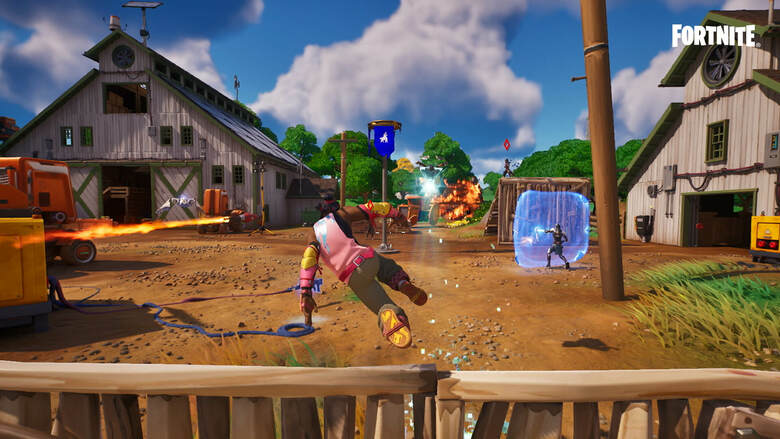 Fans were expecting the fourth Chapter of Fortnite to arrive roughly a year from now, and that was based on how all previous Fortnite Chapters worked. For reasons unknown, Epic surprised players by bringing about a new Chapter a year early! For those who don’t know, a new Season in Fortnite revamps some locations and introduces new elements, but a new Chapter completely reworks the entire map from top to bottom, while also adding in a slew of new mechanics, weapons and more.

Up to this point, Chapter 2: Season 4 of Fortnite was my personal favorite, as it was completely Marvel-themed, and the map was littered with a number of famous Marvel characters and locations. There were a bunch of fun power-ups and abilities to use, and the landmarks were a ton of fun to explore as a Marvel fan. That said, the week of time (roughly) I’ve spent with Chapter 4: Season 1 of Fortnite has definitely given my previous favorite a run for its money.

While Chapter 4’s map doesn’t have any landmarks or locations that are based on existing properties (yet), it’s still an absolute joy to explore. There’s quite a unique vibe to the layout, as it’s littered with Fall and Winter scenery, making for some gorgeous locations to visit. As you travel across the map, you’ll happen upon massive castles that overlook valleys, quaint boating towns peppered with homes, frozen tundra dotted with research facilities, and much more. Even though this map is smaller overall when compared to previous iterations, the way land masses are built up, along with the various buildings to hunt out, make it feel much, much bigger. 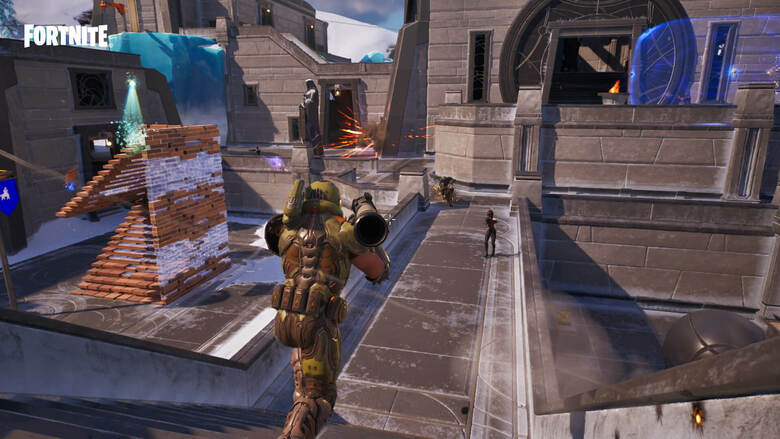 Even better are the new weapons and items introduced in Chapter 4. While some fan-favorites have returned, the lineup of goodies to grab is mostly brand-new. The Ex-Caliber Rifle is like Halo’s Needler on steroids, as it fires massive sword-shape bolts that stick in your enemies and explode. There’s the Thunder and Maven Auto shotguns, both of which are nasty up close, with one built for extra damage and the other focused on speed. Further still, there’s new rifles, SMGs and pistols, but there’s one weapon for me that stands out above all the others. Fortnite’s Shockwave Hammer has completely changed how I play the game, and that goes for both fighting and movement.

I cannot accurately express how much fun it is to wield a Shockwave Hammer. First off, it’s a massive hammer that you can swing down on your opponents, which is a blast both literally and figuratively. This hammer throws out a shockwave that’ll send your opponents flying, which is always great for clearing out some personal space. It’s certainly entertaining to crash down on enemies with the Shockwave Hammer, but its movement features might be the best aspect. With this hammer, you can bounce your way across the landscape by smashing it into the ground. You get four smashes before you have to recharge, and each one sends you hurtling through the air. Now, instead of running from the storm or finding a vehicle to escape, you can hammer the ground beneath you to bounce out of harm’s way.

The new opportunities the Shockwave Hammer offers are staggering, as each encounter is now multifaceted in ways not possible before. If you see someone with a hammer, you already know you’re in for a unique showdown. Someone with a hammer can send you flying, bounce themselves out of danger, drop down from above to devastate with a hit, and so much more. You can even use it to leap off of heights that would normally kill you, as each shockwave crash will keep you safe from fall damage. There are so many ways to use the Shockwave Hammer, and that’s why it’s an incredible amount of fun to utilize. 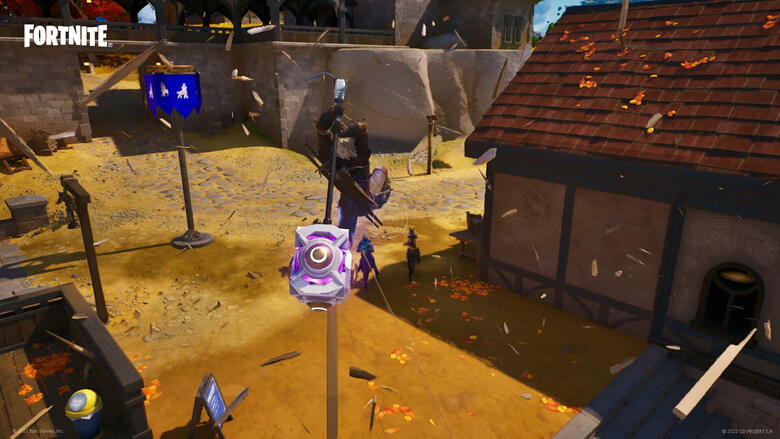 Another big game-changer comes from the addition of Augments. The longer you stay in each round of Fortnite, the more Augments you’ll have access to. Each game has the potential for you to use four Augments, and each time Augments are offered, you’ll have a choice of two to pick from. These include hiding in bushes to get health/shield, the ability to do super jumps, marking enemies with indicators, gaining extra ammo, and plenty of others. Taking advantage of these Augments can give you a leg up in the right moment, and they only fuel that fresh feeling that Chapter 4 gives off.

I’ve only scraped the surface with Chapter 4, as there’s a host of other features and content has been added. The Dirt Bikes are a blast to ride around on, the updating vaulting makes traversal easier than ever, the Capture Points are great for securing gear and marking treasure chests… I could go on and on about all the new things added in Chapter 4, but it’s even more fun to get out there and give them a go yourself.

The best part of everything added to Fortnite in Chapter 4 is that they all enhance the core gameplay. Running, gunning, hiding and exploring are still very much the focus of Fortnite, but having so many updated ways to mix things up is unbelievably enjoyable. All these variables mean that no two games of Fortnite will ever be the same, and the pull to play one more match for that Victory Royale is never-ending. I always find myself down to play one more round, and that feeling is stronger than ever in Chapter 4. 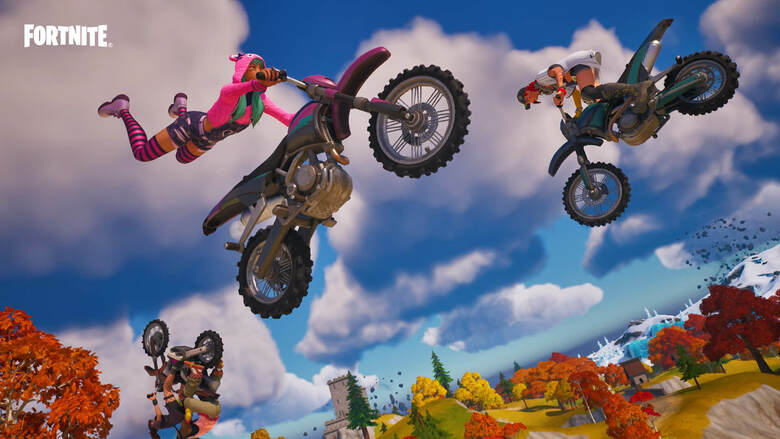 Finally, and potentially most importantly, don’t be afraid to give Fortnite a shot! If you’ve never played, the game’s matchmaking is incredibly welcoming to newcomers. You won’t be swarmed by sweaty players right off the bat, and the more you play, the more likely you are to be paired with opponents who match your skill level. If you’re worried about getting the handle on build mechanics, feel free to skip them altogether! Fortnite offers a ‘Zero Build’ mode which is everything regular Fortnite games offer, just without the building mechanics. This is my preferred method of play, as I’d rather hide in bushes and buildings than build never-ending towers into the sky. No matter what you want from your experience or how skilled you are, Fortnite will accommodate you. Grab some friends, strap on your headset and give it a go. I bet you’ll be surprised with how much fun it is.