Getting catty with WayForward 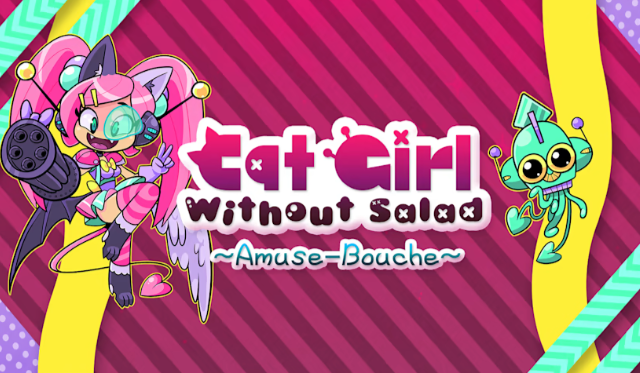 If you’re a video game fan (or anime, for that matter), you’re no doubt used to weird names. Some publishers/developers seem to go out of their way to give their projects strange titles. We’ve seen countless game names with words that don’t exist, pairings that are hard to say, and nonsensical phrases that confuse even the most ardent gamers. At least in the case of Cat Girl Without Salad: Amuse-Bouche, the odd name makes perfect sense, as it was never meant to be taken seriously!

WayForward let loose with Cat Girl Without Salad! all the way back in 2013, and it absolutely confounded fans with a peculiar premise, bizarre characters, and downright incomprehensible name. Shortly after, WayForward revealed that Cat Girl Without Salad! wasn’t actually a game, but an April Fools’ joke. While plenty of people figured this odd game was an April Fools ruse from the start, many were still sad that this oddity wouldn’t see an actual release.

It was that reaction from fans that led WayForward down a years-long path that eventually turned Cat Girl Without Salad into a real game, and then a physical release. It’s been one heck of a crazy ride for the WayForward team, and we sat down with co-directors Adam Tierney and James Montagna to get every last detail on this insane journey. 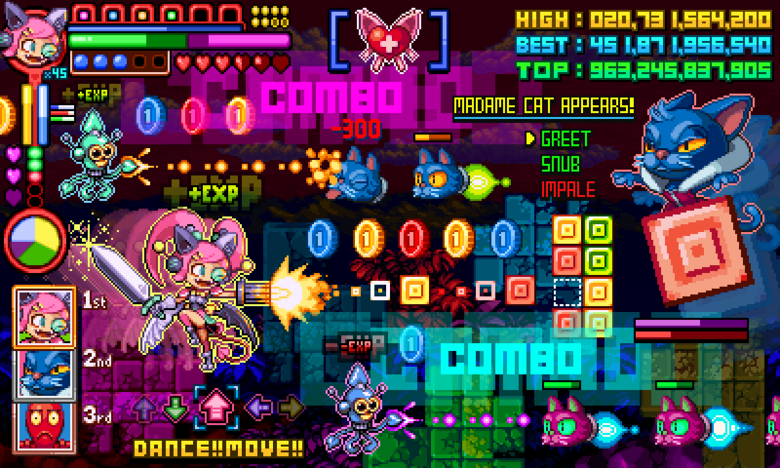 GN: Cat Girl Without Salad: Amuse-Bouche has an extremely long history at WayForward. Can you give a quick recap of how this game came to be?

Adam Tierney (co-director): WayForward enjoys doing April Fools’ gags each year, whenever we can, and back in 2013 we “announced” a game called Cat Girl Without Salad that combined every video game genre ever, and featured a chaotically designed main character as well as a pixel-art mockup screen overstuffed with too many characters, items, and HUD. People really liked the concept and kept asking us to make it a reality, so a few years later, we produced Cat Girl Without Salad: Amuse-Bouche as a Humble Originals PC title.

James Montagna (co-director): When it came time to create the April Fools’ gag itself, we worked with Lindsay Collins to have her create Kebako, a mascot that would be completely over the top in design, and a borderline hideous amalgamation of things. You wouldn’t think a character with an angel wing, devil wing, tail, cat ears, arm cannon, and a scouter could ever work, but Lindsay made a design so charming that we ended up falling in love with Kebako and her absurdity. We kept working with Lindsay on many other games as a result, and to this day her art contributes strongly to defining WayForward’s stylistic range.

GN: When the April Fool’s joke was first made, was there any intention to turn it into a real game?

James: No, there wasn’t any specific intention outwardly. But secretly, the more positive reaction we received from the joke, the more I wanted to figure out how to make it real. I didn’t think we would actually ever try to.

Adam: I think whenever we do an April Fools’ gag, there’s a bit of “wouldn’t it be cool?” about the possibility of actually making it. Of course, after Cat Girl was willed into playable existence, I think we now approach our fake April Fools’ games knowing it’s more than just a remote possibility they might become real.

GN: What happened to take the game from an April Fool’s joke to real release?

Adam: Back around 2015, I think Humble had just started inviting developers to create tiny game experiences as part of their Humble Originals platform. James and I were both between larger projects at the time, so we took three months and made Amuse-Bouche in that time.

James: Ever since the gag, Adam and I spent more than a few lunch outings together riffing on that “wouldn’t it be cool?” to the point where a solid idea was seriously starting to take shape. I covertly worked on a playable prototype of the gameplay over the course of a weekend, presented it to Adam and the rest of the crew, and by then we knew we wanted to create this thing. The timing of the Humble Originals opportunity, combined with everyone’s schedules aligning, was the perfect set of circumstances that afforded us a window of time to make it happen.

GN: How much of a challenge was it turning Cat Girl Without Salad: Amuse-Bouche into an actual release?

James: Coming up with a way to turn the genre-filled premise of the April Fools’ gag into a playable game wasn’t actually all that hard once we knew our basic approach. But, if we were going to create a game like this, we had to work quickly. As a result, there was a fun “game jam” energy throughout the development, and a lot of creativity every step of the way. That said, there were also a lot of great ideas that ended up on the chopping block. Letting go of those and focusing on a strong experience that we could achieve was the hardest part, and is honestly the hardest part of every game. Thankfully, we never let go of a good idea, so perhaps they can be folded into a future game.

GN: Where in the world did you guys come up with the name?

Adam: It actually means nothing. The original title was “Mighty Mighty Mighty,” making fun of our Mighty game series (Mighty Flip Champs, Mighty Milky Way, Mighty Switch Force). But there was concern that might cause confusion with the actual, real game series. The title “Cat Girl Without Salad” popped into my head as a replacement and stuck. It doesn’t mean anything, it was meant to sound like a title awkwardly translated from Japanese into English. Although since then, we’ve evolved the brand so that Kebako (“cat girl”) hates salad and all health food.

GN: Years after the PC release, WayForward decided to bring Cat Girl Without Salad: Amuse-Bouche to Switch. What was the impetus for that 2020 version?

James: It was partially fueled by a desire to offer a new audience the chance to experience it. By bringing Cat Girl Without Salad: Amuse-Bouche to Switch, we hoped it could be enjoyed by players who missed it the first time around, or those who don’t really play games on PC at all. I also selfishly wanted to play the game on my own Switch. 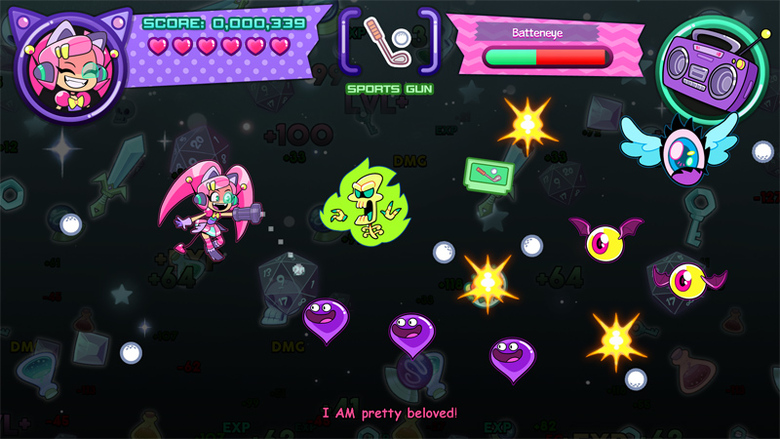 A game with literally EVERYTHING!

GN: What made you feel Switch was the right platform to bring the game to?

James: Switch feels like the venue where a wide variety of different types of players converge, and this is aligned with the broad-reaching audience we created Cat Girl Without Salad: Amuse-Bouche especially for. There may have also been some technical reasons regarding the game engine we used that factored into the decision, but more than anything it felt at home on the console.

GN: Nearly a decade later, Cat Girl Without Salad: Amuse-Bouche is getting a retail release through Limited Run Games. How did those discussions start?

Adam: We love working with Limited Run Games. There’s a big crossover in fanbases between our two companies, and LRG likes dumb, absurdist stuff as much as WayForward does. So we proposed the idea of doing a physical Cat Girl Switch release with a bunch of goofy collectible items (in the Collector’s Edition) and they were onboard!

GN: Since pre-orders for the physical version opened on April 1st, was it hard to convince people that this was a real item and not another elaborate April Fool’s joke?

Adam: It’s funny, that actually WAS a bit of a concern. But the fact that the item can actually be ordered at LRG’s website made it obvious pretty quickly this was a real release. We also released the digital version on April 1st a few years back, so beyond the jokey aspect, we now treat that date as sort of a birthday for the brand and character. Plus, it’d be a pretty dang elaborate joke, considering all the new art we produced for the physical edition and the adorable Squiddie plushy.

GN: Cat Girl Without Salad: Amuse-Bouche is the April Fool’s joke that keeps on giving. From joke to real game, then Switch release to physical copies, it seems like everything that can be done with the game has been. We know you can’t share secrets, but is there any hope for more Cat Girl Without Salad action down the road?

Adam: We really, really still want to develop a full-sized version of the game, something with eight or nine worlds and bosses that also makes good on the promise of including “every video game genre ever.” Amuse Bouche has six different game-genre guns in it, but I think the full game would have 40 or 50. We can’t stop until we get into really niche territory like Text Adventure, Hidden Object, and Sports Manager (which is incidentally one of the six fake reversible covers in the LRG Collector’s Edition set).

James: If enough players are interested in the physical edition from Limited Run Games, we may be able to make a strong case for creating more Cat Girl Without Salad titles. The game makes for a very unique novelty in any Switch library, and won’t be offered physically again like this, so I hope many people will seize the opportunity to pick up a copy!

While you can get the digital version of Cat Girl Without Salad: Amuse-Bouche on the Switch eShop whenever you want ($8), there’s just a short amount of time to get in on the physical release. Limited Run is closing pre-orders for Cat Girl Without Salad: Amuse-Bouche Collector’s Edition ‘Standard’ and ‘Collector’s Edition’ options on May 1st, 2022. If you’d like a recap on what’s included in those packages, you can check out the Limited Run Games store link.

Huge thanks to Adam Tierney, James Montagna, and the entire WayForward team for chatting with us about this one-of-a-kind title! It was great getting to run through the entire story of how this random April Fools’ joke became an actual release. We can’t wait to see what Cat Girl gets up to next!