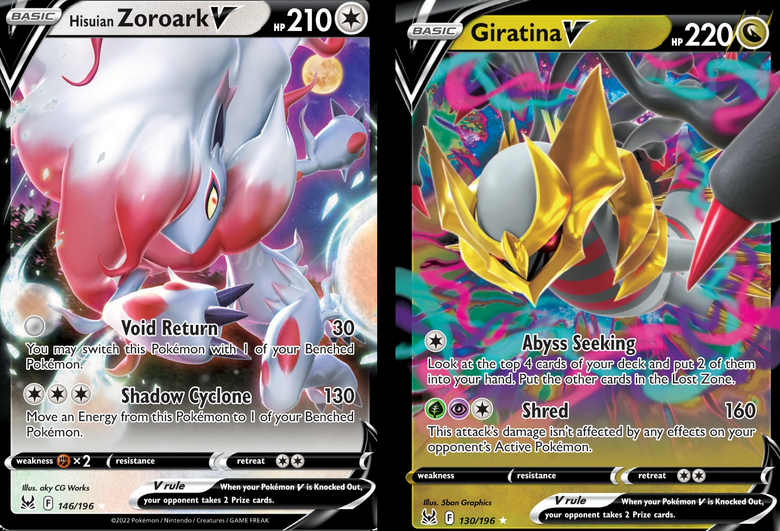 As we’ve previously covered, the Pokémon TCG: Sword & Shield—Lost Origin expansion arrives Sept. 9th, 2022 in North America and Europe. In advance of that launch, a sneak peek at two different cards has been shared. You can get a very close look at both of those cards above.

One of the cards is the Hisuian Zoroark V card, which is part of a small 30 card subset called the Trainer Gallery. The official description for this card is as follows:

Hisuian Zoroark V: A ghostly figure stalks the snow, waiting to strike! Hisuian Zoroark V joins the Pokémon TCG for the first time. Its Void Return attack allows it to return to the Bench or unleash Shadow Cyclone to move an Energyto another Pokémon and do 130 damage!

Along with that is a new Giratina card is called ‘Giratina V,’ which you can find the official description for below.

Defy the rules with Giratina V, the Renegade Pokémon! Use the power of Abyss Seeking to look at the top 4 cards of your deck, take 2, and send the rest to the Lost Zone! Then pierce the veil with Shred to do 160 damage, regardless of any effects on the Defending Pokémon!

We’re sure to get a look at more cards for the Lost Origins expansion as we head towards launch, so hang tight for future reveals!