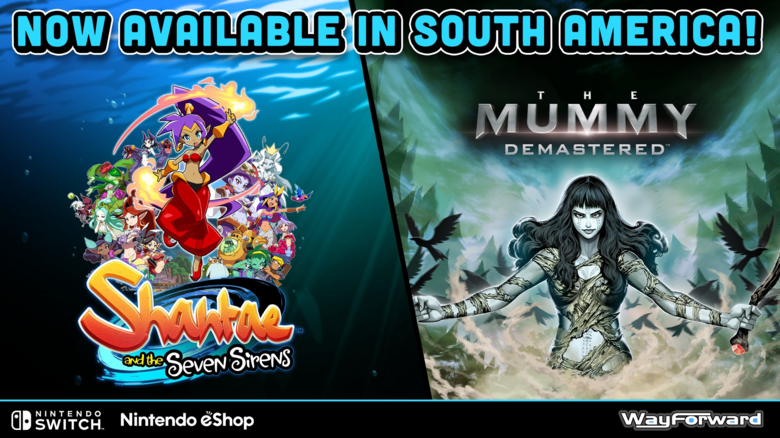 WayForward has been working to bring their catalog of Switch titles to players in South America, and today the library in that region expands once again.

Those in South America can hop on the Switch eShop and snag both Shantae and the Seven Sirens and The Mummy Demastered today. You can see a quick recap for both games below.

Shantae and the Seven Sirens

Shantae is back in an all-new tropical adventure! In her fifth outing, the Half-Genie hero gains new Fusion Magic abilities to explore a vast sunken city, makes new Half-Genie friends, and battles the Seven Sirens in her biggest, most thrilling quest yet! Featuring multiple towns and more labyrinths than ever before, an awesome aquatic journey full of danger and discovery awaits!

A powerful ancient evil has arisen, and the war to save humanity has begun! The Mummy Demastered throws you into a 16-bit-inspired battle against the undead in a 2D, nonlinear, action-packed adventure. As an elite agent in the monster-hunting Prodigium organization, you must use a variety of weapons, upgrades, and magical artifacts to defend mankind against the supernatural hordes of Princess Ahmanet. Your Prodigium teammates are already on the scene, but HQ lost contact with them hours ago; only by exploring tombs, forests, abandoned tunnels, and the cursed streets of London will you discover the fate of your allies. But beware - Ahmanet commands legions of zombies, insects, plague-ridden vermin, and worse… and if you’re not careful, you’ll be the next soul in Ahmanet’s thrall.