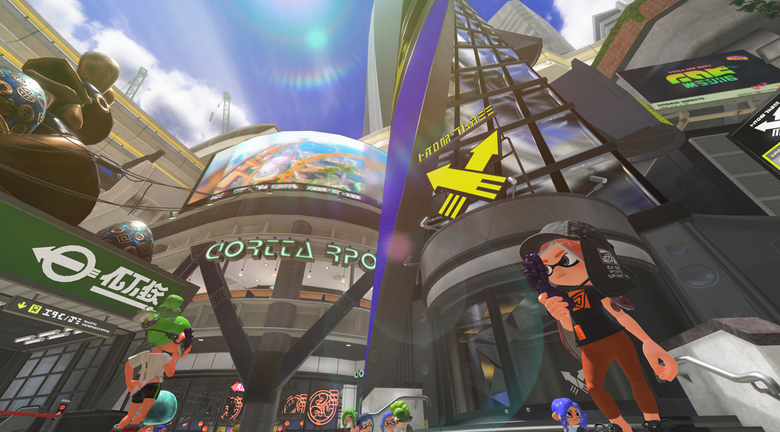 As we shared earlier today, Nintendo is spreading the word on the Splatoon 3: Splatfest World Premiere demo, which launches on Aug. 27th, 2022. You can actually hop on the Switch eShop right now and download the demo in preparation. Along with that, the Squid Research Lab has also shared some fresh details on things you’ll see in the Splatoon 3: Splatfest World Premiere, and we’ve got the breakdown below.

First up, we have more details on how the lobby in Splatoon 3 works. The lobby is the center of all multiplayer battles, and it’s equipped with state-of-the-art facilities to help Inklings and Octolings get matched up in Turf War battles and more.

Before hopping directly into battle, lobby patrons can get warmed up by trying out various weapons on the test range…or even practice new moves like the Squid Surge on a special test wall.

Another new lobby feature is holographic equipment that projects other players’ images as “ghosts.” Want to join a friend in battle? Talk to their ghost! You can also track real-time player actions via ghosts.

With the lobby terminal, you can view recent battle results and even watch replay footage! You could also pop in to check out everyone’s gear, which could give you ideas for what you’d like to wear while out on the battlefield.

Moving on from that, we also got more details on the new locker room. Given the focus on fashion in the Splatlands, these lockers aren’t just for storage. Folks trick them out with gear, stickers, and other decor. Cool stickers and other decorations can be obtained locally at Hotlantis. Make sure to check in for a rotating selection of goodies.

Finally, you can also get your catalog at Hotlantis. The catalog is filled with seasonal gear and items that you can collect by participating in battles and taking on Salmon Run jobs. There’s a new one every three months, so you’ll always have a fresh selection to keep you busy.

All of this info came with a deluge of screens as well, which we’ve lumped together in the gallery below.