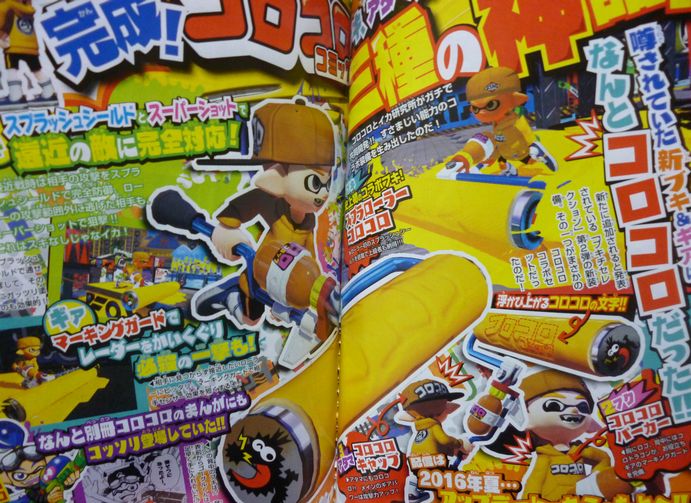 A CoroCoro collab will be part of the update that includes Sheldon's Picks Vol. 2. The Splatoon update is planned for this Summer, but considering the new amiibo come out on July 7, I wouldn't be surprised to see it all then. You can find details on the crossover items below!

Let's hope there is more gear than just a cap and a shirt(yet another shirt, why not shoes? The kind of gear there is the least of, that is also the most versatile).

Let's hope then, that the Amiibos carry such gear to them as well. To be detailed later.

Not sure how a Roller + Splash Wall will work in practice.

Come to think of it, wouldn't you need a full tank just to deploy the wall?
What then? Get one or maybe two last 'shots' in before reloading? This takes into account that the player isn't using ink retention upgrades.

Already thought of one instance where it could serve useful. Maybe the others are on the team side, since it's one of those team assist sub weapons.

Well, the Ink Wall can be pretty decisive when placed properly, so it makes sense that it reqiures a lot of ink, and thus requires players to 'sacrifice' some ability slots for Ink Savers.

So, the fact you can't fling much more than once or twice doesn't really bother me (since the Splatroller is made to kill in one/two hits anyway), but I don't really see the point of deploying an Ink Wall for such a short range weapon, especially one with the ability to one-hit-KO. I'll give it a try (it might work better in practice), but I don't expect it'll be my kind of weapon set.

I don't really see the point of deploying an Ink Wall for such a short range weapon, especially one with the ability to one-hit-KO.

It's kind of a very low mid range weapon, really. Almost, if not, the same range as a luna blaster(or maybe, that's just the dynamos). Sometimes you need defense sooner than later. That's mainly how the bamboozler works. You set up the wall, while you hone in and calibrate your shots. They are about at the same speed as the roller flings so 2 shots would be enough while you retreat and recharge, then probably do a sneak to jump fling incoming foes. You can also use it as a bluff or misdirect against snipers.

The good part though, is that you won't have to worry as much about inking the ground behind you for a retreat because the roller is the best at coverage. With .52s and .96, coverage is slow and scattered so it doesn't make sense evasively to use the wall, only defensively.

I'll give it a try (it might work better in practice), but I don't expect it'll be my kind of weapon set.

Some players have found ways and tactics to make weapons work. And other times, weapon combos just aren't as good just cause they aren't as compatible with each other.

Yeah. I believe they originally announced that they'd be done with updates early this year, but then people were bummed, so they announced (Nintendo Direct?) that they decided to do a couple more updates and keep supporting it through the summer.

If they are smart, they'll just keep on adding more updates used as a distraction to their empty 3rd/4th quarter until the NX arrives, or until they announce a release date for Splatwoon. Course, it's only been about a year so Splatwoon probably won't be available until at least 3 years into NX, if we plan to stay around, that is.

As I mentioned before, it needs another Minigame or two. And more gear that is not shirts. At least we get a hat for this one, but I'm still wanting more shoes, cause the ones they have are repetitive or just color changes. Need more black shoes/boots. There is like only 1 item that has Tenacity, and that's only a 'hat'.

Remember when Nintendo announced they were ceasing updates for Splatoon lol

Yeah. I believe they originally announced that they'd be done with updates early this year, but then people were bummed, so they announced (Nintendo Direct?) that they decided to do a couple more updates and keep supporting it through the summer.

They probably figured out that Splatoon sales are still doing pretty well.
Even outselling some of their new games. So. Better keep it alive.
Well. That and the lack of other Wii-U games

If they put in Playable Octolings by October, (0_-), they can ride off the success of Splatoon for WiiU all the way until the release of the NX.

What no Coro Coro Shoes? So sad!