We now know that Nintendo is only bringing The Legend of Zelda Wii U with them to the E3 2016 show floor. Now it seems they'll actually have two demos of the game for press to check out. Nintendo is informing media that there will be two demos available, and they're requesting that press put aside roughly 90 minutes to experience everything the demos have to offer. Well that should be a pretty lengthy look!

While i'm bummed out that Nintendo's E3 is almost nothing this year, it's nice to see that Zelda is getting an expansive demo.

Hmm, I wonder if there will be a playable female on the 2nd demo?!...

God Please No Female Links up in here. Linkle has no place in this new Zelda game.

lol they will at some point put one in a main Zelda game to attract more females to start playing them.

You don't need a female Link when you have Princess Zelda. But Zelda U/NX is just fine how it is without a female link.

Now if they did have a female link then you need a male Zelda to even that playing field out too lol. If a female link were done right I might reconsider my thoughts on the matter, but for right now Zelda U/NX just isn't the time nor the place to give Linkle or a female link a chance yet. Now If there was a female main villain for a while who kidnaps a male Zelda or some other prince then the playing field would be even too.

Not in Nin book that is. Zelda will always get grabbed up by gannon, its the number one rule Nin has been using from Nes to present. Looking at Triforce heros, they continue to do all male Link for those co-op adventure. With Linkie in the pic now, its just a matter of time before fans voice their opinions about using different characters in the next triforce hero games. Linkie is here to stay & I believe Zelda U will have her in it to extend her popularity & further the playing field for both male & female heroes in future Zelda story games. Yes they have had diff bosses female & male in the gameboy adventure ones so that is nothing new for Zelda games.

Again Zelda U/NX is not the time nor the place to have Linkle in a Zelda Game. Maybe another Spinoff. But if you want Link to have a partner, Princess Zelda can hold her own as well. Also Ganondorf as a boss needs to go away for a while. But my if you think we need Linkle, then we need a male Zelda, because that argument can work both ways. Having a girl saving another girl just don't match up. If you have a Female as a hero, it is only right to have a male who is captured and locked up by a female main villain to give Linkle a true story in that sense and that is where a Male Zelda comes in.

Linkle saving Princess Zelda just gives off a Gay Character sense and we don't need that in a main franchise game sorry. We need a change from the same old Link saves Zelda formula, I will agree to that much, but having Linkle saving Zelda just won't mesh with most people. It is only right to have a female saving a male.

Also if the Linkle rumors were true, they'd have to be careful as to not ruin the legend of Zelda as a franchise as a whole too. Having a female saving a male would help to keep from ruining things while having a female saving Zelda would cause more harm than good in the long run.

I do wonder if it'll be like I imagine.

90 minutes to go anywhere. Part progress, and part any sort of sidequest you could find along the way.

The only issue with that it's that it'll be mega spoilery since each member of the press could essentially see something different.

Tbh, I think the later is what Nintendo want to happen.

It'll all get very boring for everyone there [and us online] after 2 or 3 sessions in a single day otherwise [especially considering this is the only playable game Nintendo are bringing...]

The only scary thing besides VA being real and horrible would be this.

What exactly does that "Play by Yourself" insinuates?

I think the context is a little shrouded.
Read the whole thing carefully.

So, some Multiplier online thing I think. To include co-op play even.
But aside from the online thing, they kinda already did that with other Zelda games, so that in itself isn't new at all.

I totally get it now. 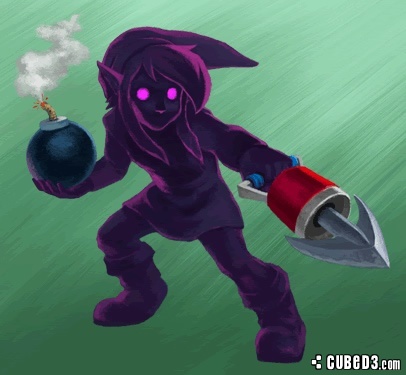 We'll have an expansion on the Dark Links from ALBW, and the return of the item rental.

90 Minute demo? That actually makes me think, just barely though that Kimishima may have not been totally insane when he mentioned Zelda being delayed to 2017 to make it an appealing experience for both NX and Wii U. If this game is gigantic then it could very well be worth the wait... Here's hoping.

It is going to be big. Just like XenoBlade X Nin will walk the same steps to show off what the game will do both on tv & on the pad. Now I wonder if this is going to be using the same ideas from triforce heros where you can now customize Links look from the get go? I think we will have options to a few diff hair styles for Link to have. What I mean by hair styles are the ones that are classic & not crazy wacky ones seen in XenoBlade X.