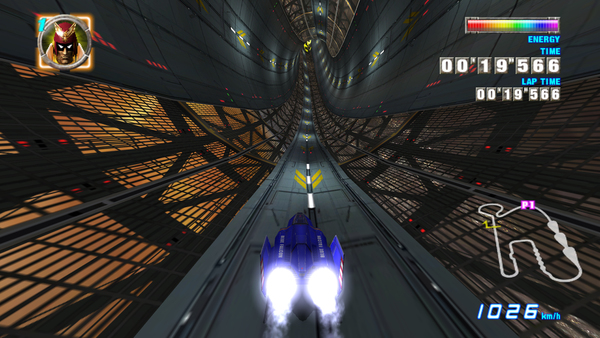 A portion of a SourceGaming interview with former Nintendo dev, Giles Godfrey...

SG: Are there any series from Nintendo that you would like to work on? How about a Star Fox?

GG: No. F-Zero would be an interesting one. I don’t think they would ever….because the expectations for these old-school games are so high now. The last F-Zero game was…F-Zero GX…and that was really expensive. It has to be bigger and better than F-Zero GX, and that would be a huge risk for them. Having said that…I really like the original F-Zero. I never got into GX as it felt more and more like Wipeout. The faster and more wide angle it got, the more Wipeout it felt. To me, F-Zero is all about those tight courses with the tight bends, and the skidding around and drifting. I’d love to go back and visit that kind of control scheme but make it a smaller experience. I don’t think they would as their current philosophy is just bigger and better.

F-Zero GX is as far from Wipeout as you can get. Not sure what he's talking about there.

F-Zero GX is as far from Wipeout as you can get. Not sure what he's talking about there.

I'm thinking he just means there were more straight turns as opposed to hard angles due to the sheer speed. If I remember correctly, that was sort of true. I don't really equate it to wipeout either, but I think that's what he means. GX is the best racing game of all time if ou ask me, but I guess it just didn't grab him right.

Just give us an HD port of GX on Switch already...

That's... Actually a valid point. Didn't view it that way myself when I first read his comment.

Though a revision of GX would probably serve the most efficient, and likely cheaper, I can see people beholding them for being "lazy" for not making a new one.

Honestly, as a fan I would gladly accept a remake of GX with AX features and online. A few new racers and tracks would be cherry.

I believe most people never even knew that AX content was unlockable in GX because it was so difficult to do. They could cheaply uprez GX (because I really don't think the cost of a new one is justified, given the series doesn't sell well enough) and make the AX content more accessible to make it worth it. "Lazy", sure, but probably necessary. If they can add online and/or more racers and tracks, then yeah, we've got an awesome deal.

Or just let Shinen make the F-Zero game they are clearly pining to do! Just give them a bit more money, some creative input, and BAM! New F-Zero!

Yeah, his comments are confusing, GX is widely considered the best F-Zero game by most and definitely not like Wipeout. I think a new F-Zero would do well on the Switch.

Is this the same former dev that was saying Nintendo aren't making many experimental games anymore? If so, sounds like this guy really likes the smaller experiences.

Well there you go folks this is the reason why we aren't getting anymore F-Zero games. Not just because the sales are mediocre but because the production costs of GX were high in addition to the low sales.

I bet we would still be getting the occasional F-Zero game to this day if the development of a new title was the same in cost to say something like a NSMB or Kirby game.

Maybe if we complain the franchise is dead at every mention or allusion to F-Zero content to a point where even Buzzfeed would take a break from their normal repetoire to complain about it. Worked for Metroid.

I have no doubt that F-Zero GX cost them a few pennies back then.

But no, it would not be "very expensive" to make a game better than that NOW.

Just give me an upscaled port of it with online. I'd rather they not screw it up with a new more casual entry anyways...

Bur it was perfectly affordable for an indie group like Shin'en to make one?

Fast Racing is no F-Zero. In production or gameplay quality. It's the perfect example of "Budget F-Zero".

Budget compared to what modern day FZero game? The one that exists in your expectations, perhaps?

Compared to an F-Zero game from two generations ago.

Which would really be the budget game if it released now.
You do realize that budget is mostly effecting it's technical abilities, not it's creative abilities right?

I don't get the impression that you understand how making games works. GX sold under a million copies globally, closer to 650K last I checked. Nintendo pumps out million sellers like crazy now days, so there's not much incentive for them to return to F-Zero. The budget for the Gamecube game with all that art, including the video production for story mode, was probably bigger than Fast Racing had put into it by the nature of company size, and expectations for a well known franchise. Game budget (generally) does not go mostly toward programming. Technically, it likely went mostly to marketing, but art is absolutely a big expense. You might have heard Nintendo struggled in the Wii U era due to the HD transition. That has a lot to do with creating HD assets, not displaying them. Just taking into account that we're in the HD era will mean that a new F-Zero will cost more than the previous one, and it wasn't a huge seller to begin with, making it more of a risk, for little reward. That's not even taking into account AX, which MIGHT have helped via concurrent development, but I don't think anyone's going to suggest that an arcade version is going to help profitability these days. Fast Racing uses HD assets, but also lacks the big story production of GX, and I wouldn't be surprised to find the asset count was lower, though I don't know that for sure. Shinen should be commended for pulling off what they did, I'm not taking anything away from them. Its just that saying the budget for Fast Racing and a new F-Zero game would be the same is just wrong. That's why my suggestion is to uprez the existing GX, rather than make an all new game. They can test the waters, keep the IP alive, and take less risk.

The cost to make FZero GX now vs then (same exact game) would not cost the same.
I think you're just trying to undervalue Fast Racing Neo because... Idk... I don't know how anyone can resent FRN for not being Fzero. Resent Nintendo for not making it. And my original comment is saying that Nintendo doesn't have a budget excuse to make a new FZero since Shin'en pulled off FRN.

I'm saying Nintendo doesn't have the luxury, or the motivation, of making an F-Zero that is only as good as FRN, good though it may be.

It'd be hard to get such horribly great character movies again.

I wish a course editor and a more indepth vehicle editor would be enough of a new thing and motivation for them to make a new game.

Those things would be nice, yes, but by "motivation" I mean $$$

I loved GX, but I get what he's saying, F-Zero on SNES was special.

SEGA made this game. I suspect Nintendo no longer has the development expertise to even make a game like F-Zero anymore. I suppose farming the development out to a competent 3rd party is quite expensive.

The only F-Zero that sold well was the first one. They should make a game similar to that and sell it on the eShop.

SEGA: Give us 5 billion USD to help you with F-Zero GX and AX.
Nintendo: Okay, here you go.
SEGA: Thanks. We're gonna funnel your money into making a bunch of cinematic RPGs for PS2. You can have our trainee, Bob, to make your silly racing game.

Well whoever that Bob person was did an excellent job and whatever he was paid definitely wasn't enough.

When Mario Kart exists, why bother with F-Zero?

And yeah I get that both offer different experiences but let's face it, besides the first one, none of the games have sold well or even sold on par with the first one so its kinda obvious that F-Zero is left to dust.

They should make a new F-Zero and add swimsuit DLC. It would sell like hotcakes!

People could argue that point for Diddy Kong Racing back in the day, and Rogue Squadron as well.

Thing is; That argument would never work. Didn't work then, won't work now. F-Zero GX sales (and in addition, the return on AX at the same time) was a pretty good deciding factor why they aren't going to F-Zero so willingly. Hell, I'd wager after Star Fox Zero pretty sure Nintendo feels more galvanized on the decision not to listen to the smaller "X franchise id dead!" groups.

Mario Kart, unless it is a complete overhaul of the whole damn reason MK is MK, will never be F-Zero, just like it will never be DKR.

Yeah I guess you're right...

GX is far and away the best in the series. A great game.