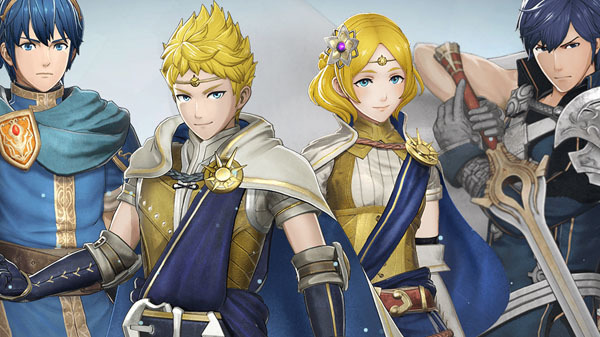 The following info comes from the Japan Expo demo of Fire Emblem Heroes.

- fights with a tome and makes lightning spheres as a normal attack
- you can change his spells for strong attack
- he can create fire, falling thunder lasers, wind blades, and a magic circle that makes him levitate
- he can also summon a giant purple sphere and a lightning vortex
- for special attacks, he uses the Levin Sword

- fights with a sword
- same moves as in Awakening, except for one attack where she uses a bow of light to attack

- swings her axe like a twirling baton, and sometimes turns with to grapple with the enemy
- sometimes ends her attacks with thunder magic with her staff
- healing effects gives you a visible radius to show you how far your spell will reach

Came for the last sentence. Was not disappointed
Another game added to day 1 buy list :D

I never understood why games didn't just included dual audio. Some people like English and others like Japanese.

It's good that this game has both.

Sometimes it's because of legal stuff.

Japanese Copyright is heav to understand. Atlus USA called it an almost impossible task to bring the japanese voices of Persona 5 as a DLC. Many japanese companies, and I mean the really big ones, only recently release the japanese dub among the english one. Square Enix is one of those companies.

The problem with Fire Emblem will also most likely caused by the heavy altered Scripts for the Western Versions.