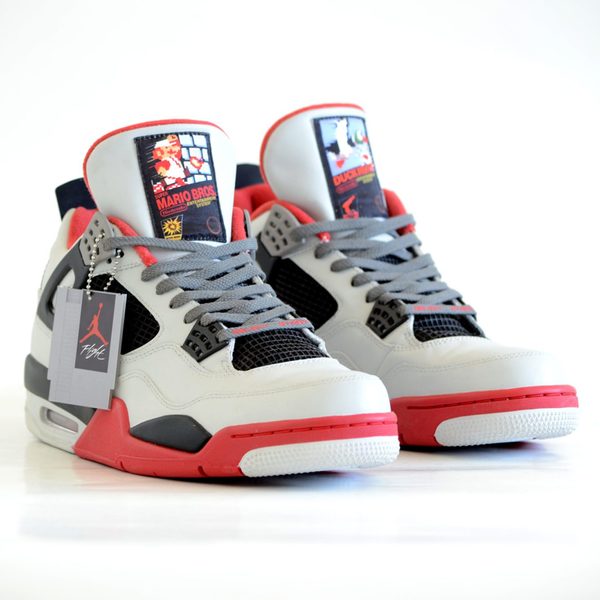 Looking for a new pair of sneakers to show off your Nintendo love? You could grab these Air Jordan 4 Retro ‘NES’ Customs by Freaker Sneaks. You just need to cough up $1,250! You know, no big deal!

Anyone know why anyone would pay that kind of money for shoes? Unless you're some weird collector who plans on keeping these things in a box, they'd be ruined within months, and there goes enough money to afford something useful, like a computer or a vacation.

Don't get judgey. Anyone can say that about anything. Like, for example, video-games. There are plenty of sneaker heads out there who do spend that kind of money on collector sneakers, but it's their choice, so who cares?


Who's being judgey? I'm just genuinely curious why people would spend that kind of money on footwear. ...okay, so I called them 'weird' but I didn't really mean to sound that way...

Anyone can say that about anything. Like, for example, video-games.


I have an N64 and games for it that still function, the combined total price of which likely does not equal $1250. On the other hand, I've never owned a single pair of shoes for more than a year or two because they're inevitably destroyed by normal usage... sounds like a lot of money for very little value.

There are plenty of sneaker heads out there who do spend that kind of money on collector sneakers, but it's their choice, so who cares?


Because asking questions is a great way to learn?

OK. People wanna spend their money differently than you wanna spend yours. There, you learned something that should be obvious.

And I've never put "useful" and "vacation" together in the same sentence, but that's me. Overall, who gives a shit?

People spend way more money on rare coins, stamps, paintings, sculptures, ect. Stuff that has no real practical use, stuff that is simply meant to be admired and appreciated. Collecting things has been a fairly common hobby for generations, not sure what's so weird about that.
As far as it being expensive, that's all relative based on ones income. Plus in the world of shoes that's actually cheaper than a lot of stuff out there. I'm even talking about everyday business shoes, shoes that are mass produced, that no one would even consider being a collectors item.

Nice to see someone provide an actual answer and not just be a dick and waste everyone's time by saying 'who cares' and 'it should be obvious'...