Switch featured in "Kaguya Wants to be Confessed To" manga 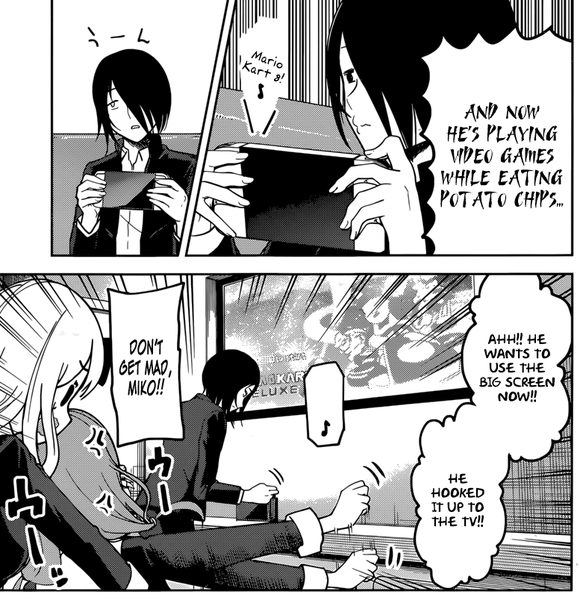 Well that certainly didn't take long. We're not even halfway into the Switch's first year and it's getting some attention in manga! It usually takes a couple years for something like this to happen. Awesome to see the Switch making an appearance in all kinds of pop culture!

I thought that most Manga would reference Nintendo games in some form...so its not surprising.

..? Most manga never reference Nintendo. They'll reference Hollywood movies a lot, and Monster Hunter (and the PSP back in the day)... But rarely do they ever mention Nintendo.
They practically stopped mentioning them after the Wii years.

What's not surprising about this is the fact that the Switch is a hit over there - so it's only natural.

When someone was playing an handheld video game in a manga, they are usually playing DS/3DS (pretty easy to differentiate). That particular character could be seen playing 3DS in an earlier chapter. :P
Also, the Wii U got represented fairly quickly in a manga, with the game pad clearly visible in the room of an otaku character, I don't remember where though.

Second also, the first Switch cameo was actually in an episode barely 2 or 3 weeks after it's release, in Eromanga Sensei. A girl play with a BIG handheld that looks like the two sides can slide off... It's completely red, but the vent is at the same place, with volume and cartridge slot same place too. It was even posted here. 22 april... a bit later than I remembered. But well before now. :P

Almost feels like an ad. They're even showing Mario Kart and the portable-to-TV dynamic

This manga is awesome. I can only hope to see an anime of that. The visual style is quite original too. The two main characters are just too adorable (none pictured here)
As for context: the guy is the Student council treasurer, and is playing at school, probably in the student council room of a VERY prestigious and elite/rich private school... and Miko is the girl that wanted everyone to be forced to have crew-cuts and she would have made having a gf/bf an offense that could net you an expulsion. She's very straight edge. She has straighter edges than a new adamantium ruler.