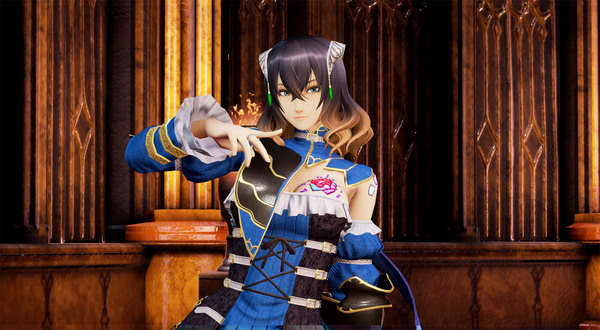 Coming from an ArtPlay rep...

Maybe it is best to clarify it here. Inti Creates is not involved in the main development of the Bloodstained game, but they are involved in the prequel mini-game. Part of the vagueness is to avoid unneeded attention and negative speculation. So yes, they are involved but not in the main game since last year's E3. DICO has picked up the development from where they have left off under mutual agreement.

A lot of parties are involved so it could be quite confusing. ArtPlay is the main developer, while we are hiring DICO as a third party developer. We created the game design, story, direction, gimmicks, and the overall production of the game while DICO creates art assets, design levels, and basically filling in the manpower ArtPlay doesn't have. In the future, you'll most likely see 505 Games and ArtPlay credited on trailer videos and articles to come out.

Just like the rep says, it doesn't seem to be that big of a deal. Let's hope people don't blow this out of proportion.

Not sure if you're joking, but he actually never said that. The translator who isn't really a translator added it in. (He was just a guy who happened to speak Japanese.)

That's not quite right. The guy who said this is a longtime companion of Inafune who also acts as his translator. Saying this because he really wasn't some random guy.

Oh, but let's talk about Iga's chaotic project. No one will admit it, but the whole Ritual project is suffering similar issues like Mighty. The 3D models are looking ugly and the movements feel slow. There is still much time to polish but it is obvious they have problems with the development. Iga made pretty big statements, so, I guess if Bloodstained will bomb, Igas reputation will fall to rock bottom, unfortunately. Also, hiring a new third party developer is never a good sign during development.

Based on what we were told during the stream he's a programmer, not a professional interpreter. He works there and he speaks Japanese and he may do that on occasion, but he's not formally trained to do so.

I've never been particularly excited for Iga's next project as I kind of think he ruined Castlevania, but I've always hoped the project turned out well for the fans of his games. I do agree with you that shuffling through multiple developers is often a bad sign. Then again, I also think Inti Creates shouldn't have been working on it because it's clear they have no mastery of 3D engines, so the development shift may have been to fix the issues you are discussing. In general, I think it just goes to show that developers who aren't used to low budgets shouldn't be doing independent development. Most of the successful Kickstarter games were from Indy devs who already knew how to make games with small teams at a low cost. Some people just need publishers and should stick to their skillset. Igarashi and Inafune seem like they need publishers. It's not a slight against them as directors, it's just how it is sometimes.

"Based on what we were told during the stream he's a programmer, not a professional interpreter."

I dunno what they said earlier in the stream, but that was Ben Judd, former head of Capcom's localization department and one of the producers on MN9 and Bloodstained. He is basically Inafune and Iga's agent and spokesperson. He accompanies them to events and they have him do pretty much all their translating.

(The better than nothing thing was indeed his own commentary rather than Inafune's.)

Bloodstained has a publisher, tho.

I still have confidence in this one since the gameplay footage always looks like they are nailing the mechanics. Mighty No 9 always looked troubling. The game still has a long time left in development, and Iga has never made a bad 2D style Castlevania.

I actually forgot all about the prequel mini-game. Inti Creates will likely deliver something pretty solid there anyways.

While I do wish the art was sprite-based, it otherwise looks like it captures the feel of classic 2D Castlevania games, and I'm pretty excited for it.