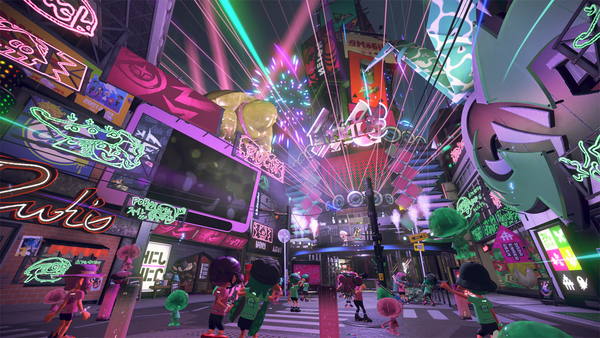 It achieved more than a third of Splatoon's lifetime sales in Japan in three days. Wow.

Yeah but you're comparing it to Wii U sales. The Wii U didn't do well....

I'm sure you already realized this from the other replies, but regardless of how the Wii U did, it still had a larger install base to sell the game to than Switch currently does, so this is no small feat for Splatoon 2.

So it is the highest selling Switch Game in Japan in only three days. Nice. I wonder how much it will sell in Japan when the Switch stock finally goes up. It will have legs.

so that's what splatoon 1's sales would have looked like on a console with a reasonably-sized install base.

Not really. The first one was a new IP, and it needed word of mouth to build a fanbase, so the sales were more... "ever green", or, long term. This one is a sequel, it already started with a fanbase, which bought the game right at the release. This one will be more frontloaded (and it's perfectly normal). Only Lifetime sales will give us a good idea of the difference. The only way we could have seen it with the first week is if it would be the third game with the second on Wii U too, so that we could compare 2 and 3.
But yeah, I'm still certain this one will get better Lifetime sales in the end. It's just too early to say.

"The first one was a new IP, and it needed word of mouth to build a fanbase"

And it built that fanbase on the least popular console that Nintendo ever created. Is it your contention that a game's sale potential is *not* in large part a function of the install base it is released on?

The term 'Ever green' titles specifically came into use by Nintendo to describe those games on the Wii whose sales were directly linked to the monthly hardware sales because they were basically complementary goods. Someone bought a Wii, regardless of year they also picked up Zelda, Wii Play, Wii Fit, and Mario. Consequently, the lifetime sales of those franchise iterations correlated strongly with the yearly sales and ultimately the install base.

Likewise, because the Wii U's hardware sales were dire (both in monthly terms, annually, and lifetime), pretty much every single franchise Nintendo released sold worse on it than entries of the same IPs on their other, more commercially-successful products.

"This one will be more frontloaded (and it's perfectly normal)."

While you have your crystal ball out, can I get some lottery numbers?

I disagree. The scientific method is not 'Don't ever come to any conclusions until you have perfect data'; it is 'Draw the conclusion you can on the best data available, and revise if/when better data becomes available'.

We will see, but I'm pretty sure the sales will slow down by a lot for the next weeks. It will certainly be higher for a while than the Wii U game, and it will certainly get a bit higher for the Lifetime sales, but I don't think it will do that much better than 2-3 millions in Japan.

(But still, I agree the console rarity in Japan (much more than here) will limit the sales for a while... Pretty sure we will see spikes in that game the weeks there will be more consoles.)

And really, I don't disagree, I just say it may be a bit soon to declare this as fact/gospels/ice cream. The total sales will be a way better indicator.

And in fact, when there's insufficient data, IT IS usually recommended to postpone the conclusion to after more experimentations/data have been done/collected with the scientific method. In some cases, making a rushed conclusion based on insufficient data CAN cause major problems. There's no real danger here, but still, the first week is still not enough IMHO, even more when it's very common to see the second game in a series being much more frontloaded than the first one.

"And really, I don't disagree, I just say it may be a bit soon to declare this as fact/gospels/ice cream. The total sales will be a way better indicator."

Sure, I am okay with accepting that as a parenthetical qualification to my conclusion, but it does not really impact my confidence in it.

"And in fact, when there's insufficient data, IT IS usually recommended to postpone the conclusion to after more experimentations/data have been done/collected with the scientific method"

Fortunately, a comment on a videogame message board is not subject to the same rules as a peer-reviewed scientific journal, so we do not have to follow those recommendations.

We can make all sorts of snap-judgements based on preliminary results and then revise as additional information comes in, and no one can stop us, lol.

Fortunately, a comment on a videogame message board is not subject to the same rules as a peer-reviewed scientific journal, so we do not have to follow those recommendations.
We can make all sorts of snap-judgements based on preliminary results and then revise as additional information comes in, and no one can stop us, lol.


Oh, I agree. It's you that talked about the scientific method first. ;)
But yeah, there no value in arguing about this now, we shall see. Que sera, sera.

that's an understatement, it didn't just outsold every switch game , but also every ps4, ps3 vita wiiu . It's astounding, there are no million seller on ps4 at all, not even remotely close. The ps3 only had one and one close. It's the best seller of this gen (for now, top3-5 at the end). If it were on another platform, the title would be something something storms, the new wave and so on.

... I thought 300k would be pushing it, knowing full well it should cross the million.
Still haven't met any jpn player despite the odd hours.

Final Fantasy XV barely managed to reach the million on PlayStation 4 in Japan. But Splatoon 2 will reach this number far more easy. Million-Seller has become a rare thing in Japan. I'm highly impressed by the Splatoon 2 Debut. Only Dragon Quest XI is able to top this. This will be interesting weeks for sure.

Dragon Quest and the POKEMAAAANS.

so hype Nintendo owns and you know it
this is a real seller in Japan and now lets see if it sells more than DQ ;p

aside note the squid purple amiibo is sold out

I bet it's closer to [or at a million] including digital sales. Go Splatoon 2!

This is excellent news. Splatoon is a huge hit. I hope Nintendo gets it's stock problems sorted out so more people can get this console in hand.

The switch is tailor made for Japan and Japan loves them some Splatoon.
Splatoon 2 was a no brainer. It was smart to sacrifice changing the visual style to make it seem more new in favor of making solid and more polished gameplay. So great to see a new Nintendo IP achieving such a level of success.

I would Imagine digital sales would be a large part of the sales (and isn't included) seeing that people want it as soon as possible and it could be hard to find a physical copy in Japan. I bought it digitally as I hate changing the cartridge (first world problem).

I love Splatoon and Splatoon 2 so damn much. This makes me incredibly happy. I hope the numbers from NA are really good too!