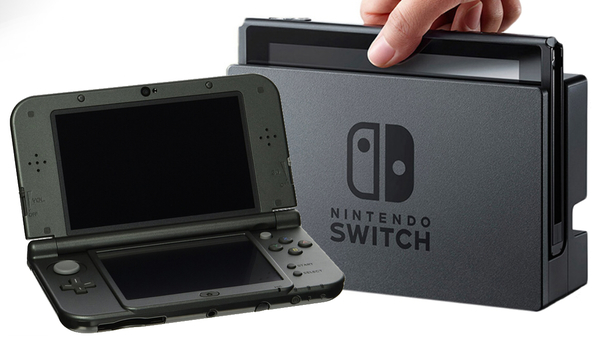 Made $81 million from Smartphone games not including Pokémon GO

Made $29.4 million from Pokémon GO 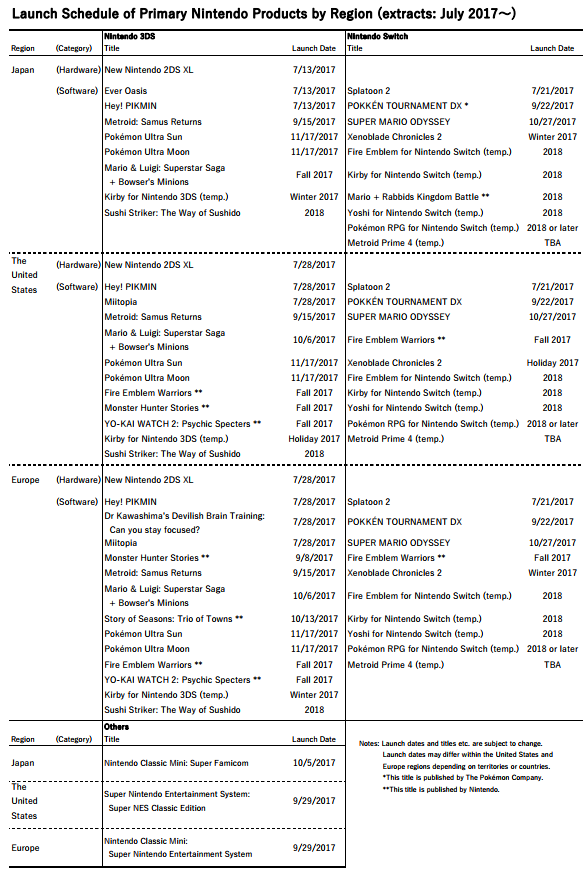 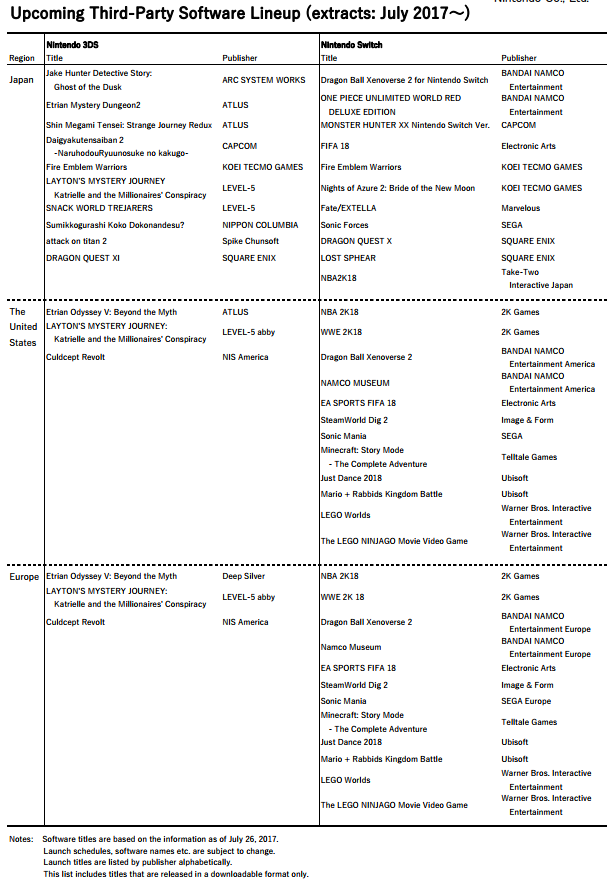 There are no revisions to 3DS/Switch hardware sales projections 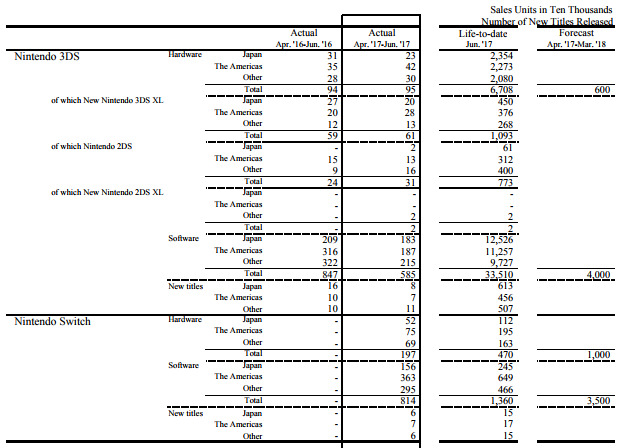 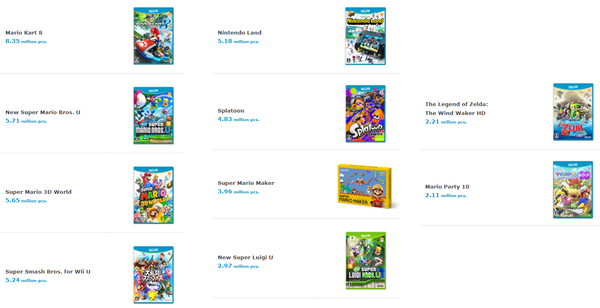 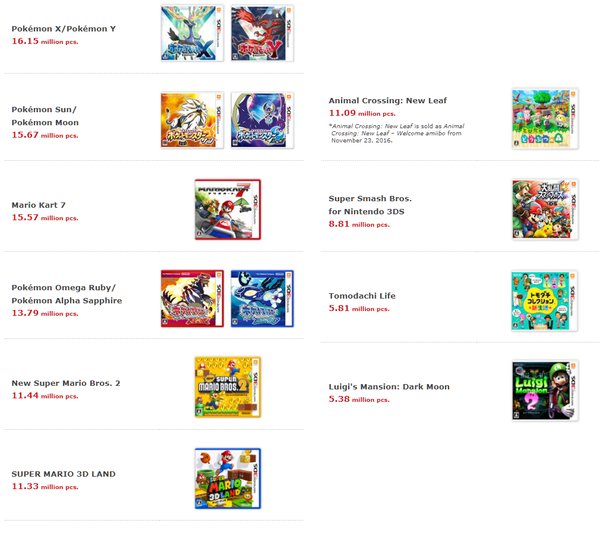 Now, I wonder where has gone that "ZOMG PS4 FASTEST-SELLING CONSOLE LAUNCH EVAH!" narrative that was pushed by IGN & pals. I wonder...

I've done some research about the partial "first quarter-circa" sales figures and I've reported what I've found as part of a reply to a comment I did on this GN news article.

Now, whether the Switch will be able to mach the PS4's current 60-million overall console sales milestone or not is still anybody's guess...

According to this chart from vgchartz: http://www.vgchartz.com/articles_media/images/february-2017-sales-1-3.png

It seem like the PS4 was at about 6-7m at this point in time. Not the most reliable source, but there is not much else to go with.

Personally I highly doubt that the Switch will be at 60m in 3 years from now.

There is that tidbit that Sony built more PS4 systems from the get-go than Switch. Leaving it an ample opportunity to reach a higher million. This of course is assuming that the 6 million is true.

Yeah, the results I found were about the first 2-3 months of life for both systems circa, so that one may have its footing; too bad there're no sources for some of the partials from the original page in which that VGChartz image was posted...

I would never use VGChartz as a reliable source. Just FYI.

It still is. Why does that matter to you? Why bring it up? The PS4 is doing great. The Switch is doing good. Why can't both companies do well?

I think it has less to do with the PS4 and more to do with people pissing on Nintendo using Sony's success as proof Nintendo isn't doing well.

Similar to how you see Sony fanboys point out PS4's years old library as proof a 5 month old console has no games.

Rubbing it in the face of people who rub stuff in our faces. i.e., being no better than them.

My point exactly. Pushing a narrative only to get some click revenue/braggadocio is just sleazy...

Not even a half-year yet, and already the Switch has sold 1/3 of the Wii U lifetime sales. If they can manage to keep the thing on shelves, the Switch could likely surpass Wii U total sales within its first year.

Well, to be fair, there are people like me that already owned Mario Kart 8 on Wii U so didn't want to pay 60 dollars for a Battle Mode that I feel was intentionally left out of the original release. Meanwhile, I bought a Switch and Zelda was the main game available for the first two months of it's release.

Well Zelda was out for almost 2 months before Mario Kart was released. MK will definitely surpass Zelda soon.

And there are also almost more Switches than Splatoon sold (4.83m)

Zelda probably sold better because it is a new game, and has been out longer (on Switch).

MK8D is a port, so many people who already owned it may have skipped it.

It might yet hit 3mil by the end of this year.

Yeah, I'm really happy with this game. It's pure fun and it looks great.

I don't care how much the Switch has sold. I'm just excited there's another Kirby game coming by the end of the year.

Fire Emblem Echoes: Shadows of Valentia has been a popular title

Ok...but how much did it sell?

But seriously though, Good news for Nintendo either way. I'm pretty sure that the Switch should be able to sell atleast 10 million by end of this year and the 3DS at 70 million atleast.

I'm assuming they won't tell us, as I'm sure it didn't sale as well as they had hoped.

As FE tends to be front loaded when it comes to sales, and always sells best in Japan, I have my doubt it's sales are spectacular at least in Japan. Mind you this game did come out after the Switch launched, so that can be a reason for lower sales. But frankly, I think it's due to the game itself, It's not as good as Awakening of Conquest. Plus the whole Mila's Turnwheel should never have been included in Classic mode, defeats the purpose of permadeath.......

As long as Nintendo can solve the stock issue, I think they'll blow past their 10m mark easily. Maybe even during the Holidays, the Switch is going to be the hot item to get this Holidays. It certainly won't be the SNES classic, as all stock will be sold out on launch date with no more to come... hahaha

It lists Mario plus raving raids for 2018, is this new?

Yes, it's the sequel to Mario + Rabbids.

It's releasing in Japan in 2018 as Nintendo is doing the publishing and probably translating it themselves.
Otherwise it's releasing 29th Aug 2017 everywhere else.

I can almost place a bet a Mario & Sonic Olympics is dated for early 2018, and a Mario Party somewhere in the next year as well.

Anyone who doesn't expect that hasn't been around for very long.

I'm so down for a Switch Mario Party. I've never played one but my older son is interested (watches Mario Party YouTube videos) and my youngest will probably be ready to join the family at it by the time it comes out.

There was a rumor prior to Switch's official announcement that a Mario Party comprised of the orignal three redone with larger maps, items, 8 player and online functionality.

At first I thought it would be bunk. But since then all of those mentioned features would actually be something Nintendo would do with a Switch Mario Party.

I've never heard or seen of this rumor. But that sounds great as I'm down for a CLASSIC Mario Party on Switch. Tired of driving around in a car like 9/10 or whatever the hell Island Tour and Star Rush tried to do...

I pretty much figured it was some blip of a rumor. Regardless if the original is remade or that it is a new game entirely, the features mentioned do sound reasonable for Switch to do. Would be right up Nintendo's alley as well since I can see Joy Con sharing, 8 player LAN, and even a motion sensor when you shake a handheld Switch to "roll" dice.

That does sound awesome. I am sure there are others like me who never played them, so they'd be "new to us."

Still would love to see USF2, Minecraft, and games like Cave Story sales. Splatoon 2 will likely hit 3 million worldwide by the end of the month. Hopefully they just announce some type of a patch that includes creating parties with friends for regular battle (to always play on the same team because right now that is not guaranteed), and an option to change your loadout in matchmaking.

Also at this point Zelda's over 5 million between both Wii U and Switch which is awesome, but what I will be super interested to see is how it performs this holiday. Zelda games are usually sellers but never attach this well,. This is the most hyped and well-received Zelda in a long time, and once more Switches become available, I'd love to see it break 10 million, to prove there's still commercial life in the property.

Also congrats on the Switch success. Now hurry up 2018 I need my Kirby, main Fire Emblem, and Metroid Prime 4.

I know, that games was fantastic! I'd love a Switch 3rd entry! ^__^
Since MP4 only got a non finished title (MP2 Echoes, MP3 Corruption, MP4????), no developper, a TBA and zero confirmation of a 2018 possibility, I'm afraid we are going to have to wait until at least 2019 on this one.
Can't wait for Fire Emblem!

2 million for WW? I bet they are taking into account the ones they gave for free with MK8

Anyway those Wii U sales are very sad but that's in the past now. I hope that Switch has a much brighter future