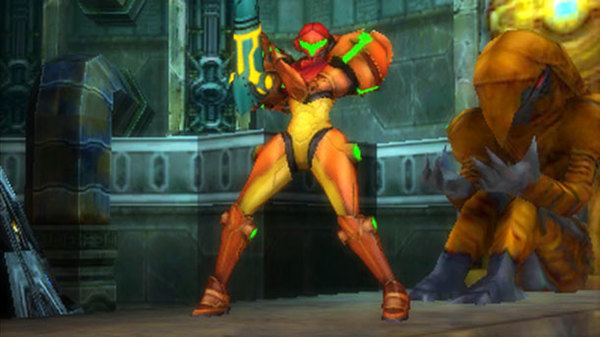 Earlier in the week, Nintendo talked about content for Metroid: Samus Returns. We learned of features that require an amiibo to access, including Fusion Mode. Nintendo then reconfirmed this information via a press release through Nintendo EU. Still, people weren't sure that this content really was locked behind amiibo. Now Nintendo has commented specifically on the matter, stating, "this unlockable content is only unlocked using amiibo". If you had an questions about that content being only available to those with the amiibo, you shouldn't have question anymore!

Remember back when people were worried about Amiibo locked content when the figures were announced? We all worried that locked content like this might mean paying for something already in the game and Nintendo reassured us, saying they would never do something like that.

I sure hope they remember their own words before this gets out of hand and people simply accept it.

People make counterfeit amiibo cards and sell them in etsy all day long. Really nice production values and work great. If the real thing becomes impossible to find, you can always go that route.

This is the worst and most anti-consumer type of on disk dlc. Sadly Nintendo is also the only one that practices this, not even an industry standard.

There's the catch to getting a new Metroid. Gotta pay extra for standard features.

Remember back when people were worried about Amiibo locked content when the figures were announced? We all worried that locked content like this might mean paying for something already in the game and Nintendo reassured us, saying they would never do something like that.

I sure hope they remember their own words before this gets out of hand and people simply accept it.

Amiibo have been unlocking features already in the game since the beginning?

Doing both in the same game, so DLC or Amiibo to get the same thing, would be a better (STIL BAD) idea IF Nintendo "want" to get money!

Metroid feels worse, since it's $15 Or so for the one Amiibo.

But people seem to go the thinking pattern of if they buy 1 X amiibo, that the DLC becomes literally 15 dollars each game. When using that same said amiibo actually decreases the value of each DLC it "unlocks" within the games they play. Of course, the value fluctuates in concerns of how often those amiibo are used and which games the player owns.

Not saying this is a good practice and defending amiibo functionality (though honestly, any kind of locked content seems to be a bad idea regardless the level of uselessness it has in the eyes of the consumer). Just saying it seems to be a trend in the case of pricing amiibo to the games they're utilized in.

I think the amiibo thing was done best in Smash, since literally the "take my preset anywhere" feature would have hardly gotten used to begin with. It was a lot of content locked behind a DLC system people didn't want to have access to things no one used.

Yeah I get Amiibo only gain in value with each game, though this is a brand new Amiibo you have to buy, and I'm thinking after this game it will function as a regular Samus amiibo in other games, which I already have.

I'm not really trying to say it bugs me a whole lot, just saying overall, Zelda' s hard mode had more value since it was mixed in with other stuff.

This is disgusting. One step forward and two step back- is this the new company policy at Nintendo?
All this good will they have is going to evaporate someday if they're not careful.

Get used to this. Kimishima is a businessman first and foremost, who's ONLY concern is the company's bottom line (I am not complaining about this--just stating a fact. I personally have no problem with amiibo-locked content). Any way he can find to help Nintendo make a buck (yen), he will use it.

Not to forget, the link between Prime 1 and Fusion was also required in order to unlock the NES Metroid on both games.

You're over looking the value is really for fans that already had all that was necessary. So for me, to find out one day was like what....I can do some MacGyver shit with my GBA SP & GC to unlock stuff, sweet!

Four amiibos needed to unlock all the content in the game. No extras for those who aren't willing to pay up, huh? I'm really disappointed in Nintendo.

This is why I got a PowerTag Writer and a few tags so I can have any Amiibo without giving Nintendo a cent for their paywall tactics.

I have not purchased a single Amiibo and never will. If you don't like Nintendos practice I suggest you follow suit.

Think I'll go ahead and buy one of those amiibo spoofer devices if this becomes a more common practice... unlock whatever I want.

I'd actually like the Metroid Amiibo in this case, because they are awesome, but they seem to be unavailable for preorder anywhere. Figures.

I think it's reasonable to lock content behind amiibo as long as they make enough of them. Unfortunately, their track record isn't the best in that department.

Super crummy if true, but I assume there is a standard unlockable Hard mode like in previous Metroid games.

Fusion Mode is probably just that but with a different suit (maybe with a Ganon- style damage modifier), but Nintendo wants to be imply that this is the only extra difficulty mode until the bitter end to make the Amiibos look like a more attractive purchase.