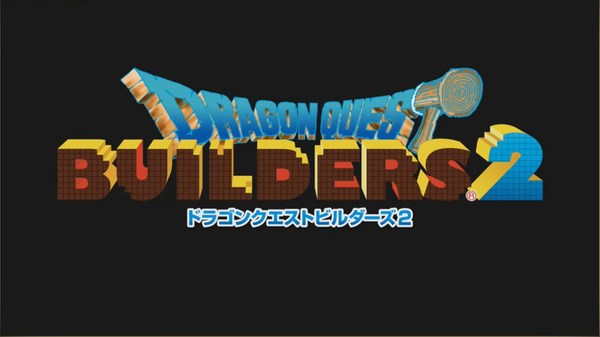 
You can glide around in Dragon Quest Builders 2 now too! pic.twitter.com/5YpYLLXVMk


Multiplayer is coming to Dragon Quest Builders 2 as well! pic.twitter.com/F8x6NlqRQf

Well that's some awesome news! Square-Enix is definitely showing some nice support for Switch. We'll bring you more details on this game when they come in!

Switch and PS4? Shame, as if this was a switch exclusive I wouldn't be grabbing it on PS4 for the trophy support/likelihood of better FPS if DQHeroes 1/2 is anything to go by.

I guess it makes sense to put it on switch though, for Nintendo only owners who like DQ and the fact that the Switch is the next vita (which DQB1 was on) which means that DQB2 will sell very well in Japan for sure. Would be more enticing even to me though if the Switch got both DQB1 and DQB2 in a double pack running at a smooth framerate as it would be a great value even if it lacked trophies. I need to get the first one sometime, but I've heard great things about it, so if you don't have a PS4 I'd keep an eye on this game for the Switch! Touch controls might give it an edge if they're used at all.

I wouldn't be surprised to see the PS4 version running in 60FPS and the Switch version in 30, but don't use DQ Heroes as a point of reference as that was developed by Omega Force, and they are notoriously uneven when it comes to stable framerates.
A double pack with both Builders games really would be ideal, but I don't see it happening with this one.
Personally, I'm a die hard DQ fan, but even I can't justify playing Builders. I really loathe anything with that awful Minecraft blocky look.

Honestly, I rarely care for minecraft like games as well, but since it has good music and a story, it's more appealing for me to check out compared to MC, which I only plan to get on Switch if it goes on sale or gets a retail version. (since the PS4 one isn't getting cross platform play for some stupid reason.) Hopefully DQB2 uses elements from DQV, as I heard the first one only focuses on the earliest entries, as if it does then it'll be an easier day one buy since DQV has the best music of the ones I've listened to so far

Heh, I still don't get what great enhancements a trophy system adds to a game... I got the first DQ Builders for the Ps Vita and the addition of an achievement system isn't improving my experience... I mean, it's just a random notice popping up every once in a while!

I'm also a little sceptical how the Switch version will perform technically. The Vita version (I imported the japanese version when the game was released) performed at a very unstable and low Framerate, but visually it was impressive. But I prefer performance over looks. In the end, the PlayStation 4 version was superior in every aspect (no surprise). And even Heroes was developed by Omega Force, it is an example how to do it not right on the Switch.

It shouldn't be an exclusive for the Switch though. It needs to be on a system with more power too.

Good news. DQB1 was great. I never finished it but I definitely had fun with it. It's a Minecraft game I can enjoy (with purpose and plot).

EDIT: Ooooh there's actual plot and such, quests etc to do, my bad.

Thanks for the info, that actually sounds like a lot of fun.
Basic Templates / templates you can save are something I always wanted in Minecraft.

Meh...wake me up when Square brings over a Final Fantasy, Tomb Raider, or Kingdom Hearts to the system then we'll talk about "support"

I think this is already a big step since this is literally taking the place of what would normally be a Vita version. If anything a big release like this and DQXI is good enough support since not even the Wii U got a multiplat DQ game outside of the already-on-wii DQX

Or maybe I'll wake you up when Nintendo actually bring out a system powerful enough to actually bridge the gap between game versions instead of giving us hugely downgraded ports? The Switch is great but it really isn't third party's faults that their games have too much going on that only the PS4 and XBox can run.

"downgraded ports" is a myth that's spun by people who don't know any better. If every game developer tried to put out games that looked like Uncharted, Tomb Raider or Last of Us (ps3 versions) on Switch, it would be more than sufficient. Instead, they say "it can't handle it" but somehow Xbox 360 and ps3 could.

I wouldn't mind another FF spinoff really. I am one of the few that found Crystal Bearers to be pretty awesome, so a FF game made for the Switch would be nice. The Switch can't handle FF15 anyway. Maybe FF7R.

I'm sad we didn't hear about that Octopath game, that looks so up my alley I can taste it, if you catch my drift hurr hurr hurr

I suspected Dragon Quest Builders to be one of Square's "supported" games to Switch, but I just suspected it would be the first one ported over to "gauge" interest like everyone else does nowadays.

Now for in inevitable FPS comparison videos for what is essentially a building game.

I absolutely LOVED the first game, so this is great news to me. For anybody who ever wanted Minecraft to have better graphics, a story, and NPCs that interact, this game is worth a shot. It also carries a lot of Dragon Quest nostalgia.

Hopefully it includes the history of DQB1.

SQUARE THANK YOU! I WILL BUY ANY DQ GAMES YOU BRING OVER TO SWITCH!!! OH BABY YES!!! Never got to play the first one but I've been eyeing it since day one!

DQ bulders is definitely a game that you want on the go. A nice addition to the Switch library and also proof that SE takes the console seriously.

neat, I wanted to play one of this fancy voxel thingy the young ones are enjoying. lol. No but seriously it's an adventure game i'd like to try