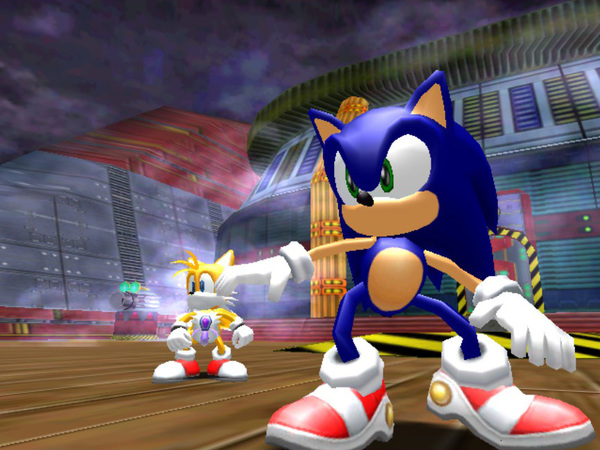 Oh boy, here we go. Looks like there might be a little cause for excitement. You know, as long as this info is true. No idea why these listings have appeared. We can certainly take one big guess as to why, but that would be speculation. Let's hope this turns out to be the real deal! Thanks to The_Ninjadillo for the heads up!

"Have appeared" ... the SQL database exists since 2003 with this entries (the list is from the Gaming 24:7 era) - NoE currently migrating the database from the Wii era homepage to the Switch era one (you notice, that "past releases" are still in the Wii design, while "future releases" have since this week the Switch design.

My guess: A simple SQL error - or the entries have to be reinput for the new design.

I have been waiting SO long for a portable Version of Sonic Adventure. Please god let it be true!

"Have appeared" ... the SQL database exists since 2003 with this entries (the list is from the Gaming 24:7 era) - NoE currently migrating the database from the Wii era homepage to the Switch era one (you notice, that "past releases" are still in the Wii design, while "future releases" have since this week the Switch design.

My guess: A simple SQL error - or the entries have to be reinput for the new design.

Especially since one of the four games is the Chronicles of Narnia... Well, it makes me wish this is true, it would be hilarious if they chose to release that game instead of the obvious choices!

Ohhhhhhhh man. The day I'm able to play Paper Mario TTYD wherever I want will be a glorious day indeed. It'll be nice if they upscale the resolution of all VC releases to at least 720p, but knowing Nintendo, the chance of that occurring is about as likely as friend codes disappearing.

At the very least they could fix their white balance issue.

Upscaling may depend on the game. For example Wave Race, Sunshine and the Windwaker shared an engine. So I if they wished they could update the lens flare and lighting in those. I think.

Can't be possibly getting any worse than Sony with the remastered PlayStation 2 Classics. Still bringing the slow PAL-Versions to Europe including a lower Framerate and PAL-Bars in Cutscenes. Nintendo, at least, I would also think they wouldn't even bother to Remaster a single frame for the classics ;D

Would be nice if the reason that the Switch VC is not out yet is because they wanted to have a good amount of NES, SNES, N64 and GameCube titles on launch.

Nice, nice!
Hope we get some good games.

If they come, im downloading Doshin for sure! I wanted that game so much, but it never came here.

1. Give me Luigi's Mansion.
2. Give me Super Mario Sunshine
3. Give me Path of Radiance
4. Give me thousand year door

And give all the other goodie games the gamecube has as well.

I doubt GCN is on it's way. Trust me I WANT GCN VC as much as the next guy. I just don't see Nintendo doing it just yet. We haven't even gotten the basic VC systems like NES/SNES yet. I doubt Nintendo will start off with GCN games. I think GERJET is onto something. Also out of all the GCN games to launch the service with you choose Doshin the Giant and Sonic Adventure DX? Doesn't seem like Nintendo would do that...

maybe is not a VC, maybe is more like a digital version of this games like the WiiU had Mario galaxy 2 and another titles on it...who knows

Well, it would still be VC since it's not like the Switch has a Gamecube channel...whereas the Wii U had a Wii channel already.

Or they are going all in with the Switch VC this time, which also means GC. That would even explain a lot of their silence. And Doshin would be a perfect fit, also SA DX for that matter... All besides their big hitters that would come later.

I see the logic in this.

I'm craving for VC as much as anyone else, but when Chronicles of Narnia of all things is on this list (not shown in the pic) then it's unlikely to be anything but an error

No clue whether this has anything to do with it happening (by the sounds of things, probably not) but regardless this is something Nintendo should already be doing. So many great games both first and third party they could put out. It'd also be a great selling point to add on to the platform, there's a lot of nostalgia for the GameCube and that era (third party games from PS2/GC/XBox on a portable would be a nice feature).

I really just want to see GCVC to finally get my hands on games that I've wanted for years but never had the chance to play because they're too expensive to pick up now and I don't have a PC remotely close to being powerful enough to emulate GC games. Things like Paper Mario 2 and Twin Snakes passed me by first time round and I'd love to be able to pick them up on Switch.