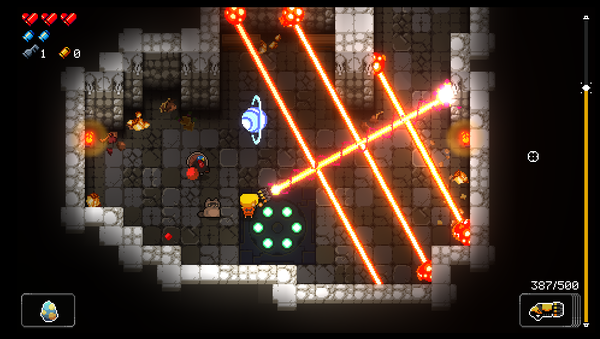 We are excited to announce our second major update: Advanced Gungeons & Draguns.

The focus of the update is on community requested changes, quality of life and convenience features, hundreds of new and substantially more powerful synergies, a bunch of new guns and items, and getting revenge on the Gungeon’s most hated resident, our new boss. Of course there will also be new rooms, npcs, secrets, and a new mini-boss. Our primary focus was to make the Gungeon a more generous place, while retaining options, for players who really engage with the difficulty of the game.

If you tried Gungeon in the past and found it too hard, too stingy, or too slow- this update will be the version for you. If you liked it just the way it was, don’t worry, we’ve got you covered as well.

The aim is to release this update simultaneously, or semi-simultaneously on each platform, and yes that includes the Nintendo Switch, this fall. In the meantime, if you want to check out some of the new stuff- swing by the Devolver Booth at Pax West next week.

We see this update as the ‘complete’ version of the original release of Enter the Gungeon, hence the word advanced in the title. We’ve included nearly everything that we had in our original and insanely over-scoped plan for the game, as well as tried to incorporate as many pieces of thoughtful feedback from our lovely community. We read the comments, and we’ve stolen many of your ideas wholesale. As we get closer to the release of the update, we will have a detailed post about the changes included in the update. Thank you so much for your continued support of our silly game, Dodge Roll, and Devolver Digital. This update is not the end of Gungeon, we’ve got something small (but awesome) coming in September, and next year we’re breaking down walls. Until then, punch that Rat in the face for us.

This is fantastic news. Just a few nights ago I finally finished the game (in its most complete way) and I'm still itching for more. I'm actually tempted buy this a second time for Switch, because it would be a great game to have on the go.