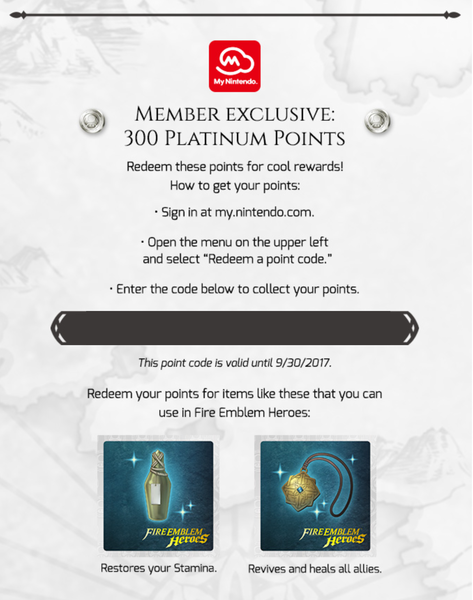 If you're a My Nintendo member and playing Fire Emblem Heroes, you should have gotten this email either today or late yesterday. The email contains 300 Platinum Points for My Nintendo. That's a pretty nice sum for nothing! Thanks to Neo Dark for the heads up!

The only time that I was missing Platinum coins to get something that I wanted was when Wario Touched was available for 1000 coins, at that time I made the choice of priorize Twilight Picross and wasn't able to get the Wario game. Now I have over 2500 coins and nothing to spend these on, to add salt to the wound that wario game was never available again on My Nintendo and even the 3DS themes now need gold coins which I have 0 T_T.

Oh goodie. More Platinum Coins that I can't use because Nintendo is cheap and lazy and won't put up anything better on My Nintendo even when they're making bank again after the Wii U era forced cutbacks.

Come on Nintendo. Allow My Nintendo Coin conversion to eShop credit! Like 2000 Platinum Coins for a 20 dollar eShop credit!