Nicalis Marks 10 Years as a Leading Game Publisher and Developer 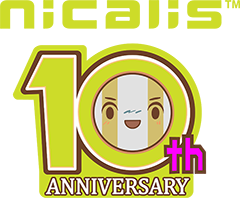 SANTA ANA, Calif., September 13, 2017—Celebrating its 10th year as a leading independent video game publisher and developer, Nicalis, Inc. today reveals its new company logo and 10th Anniversary branding, kicking off a series of special events and promotions that will continue the celebration into 2018.

The new logo reflects many of the traits that have been hallmarks of Nicalis games since the company’s inception: it’s highly polished, friendly and fun, with a distinct retro vibe. The logo change also represents the start of a new chapter in the company’s evolution—a turning point ushering in an even greater era of video game entertainment after a decade of lessons learned.

The first event in Nicalis’ 10th anniversary celebration is BICFest 2017, the annual global independent games conference in Busan, South Korea on September 15-17. Nicalis is a platinum sponsor of the expo, which will feature many of the company’s upcoming games in a large, designated “Nicalis Zone.” The new Nicalis logo will be displayed in public for the first time at BICFest.

Nicalis also recently launched a completely redesigned website at www.nicalis.com, where fans can get a peek at some of the company’s upcoming games and learn more about the special events planned for the 10th anniversary celebration, among other surprises.

“I couldn’t be more proud of the success we’ve achieved in our first 10 years,” says Nicalis Executive Producer and CEO Victor Rodriguez. “It’s a testament to the creativity of our talented game development partners, the dedication of our experienced team and the passion of video game fans worldwide.”

Achieving worldwide recognition with its first published game (Daisuke Amaya’s Cave Story), Nicalis has also developed and published multiple editions of the hugely popular The Binding of Isaac (Rebirth, Afterbirth and Afterbirth+). The company’s retro-inspired roster includes 1001 Spikes, NightSky and VVVVVV, and the cornerstone of its success was rebuilt in 2017 when Nicalis produced Cave Story+, an updated, enhanced edition for Nintendo Switch.

Upcoming Nicalis games include Tiny Barbarian DX, Ittle Dew 2+, Blade Strangers, The End Is Nigh, Redout and ’90s Super GP, with many more to be announced as the 10th Anniversary celebration continues.

“You’re going to see some very cool announcements from Nicalis over the next few months,” says Nicalis President Tyrone Rodriguez. “I can’t wait to reveal some of the 10th Anniversary surprises we have planned for fans of our games, and fans of classic video games in general.”

Congrats Nicalis! Hope for the best of you!

Now how about talking to Studio about making a brand new Cave Story game instead of a millionth port of Cave Story+?