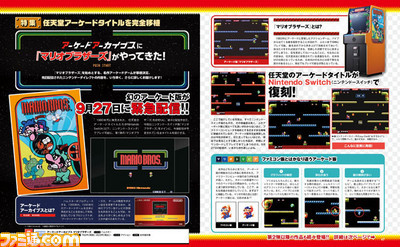 Based on this week's issue of Famitsu, a bit more information has been revealed regarding Nintendo's upcoming Switch Arcade service. On top of the previously announced games such as Mario Bros. and VS. Balloon Fight, Nintendo has also announced that Excitebike, Urban Champion, and Wrecking Crew will also be joining the lineup. The exact dates in which these games will be released is currently unknown, but more information may be revealed on September 27th when the first arcade game, Mario Bros., is released.

I hope that HAMSTER is working on the arcade version of Donkey Kong for the Switch.

I've heard that might not happen because Nintendo doesn't own the manufacturing rights to the original arcade version. Apparently there has been a lot of legal wrangling with Ikegami Tsushinki over it.

Any of your information on who owns the original arcade version?

Well its Ikegami Tsushinki. You can read about it in this article.

Will these games have save state / suspend features like the VC does?

That's very likely. I think Hamster is handling these, and their Neo Geo Arcade Archives games all offer save states and a ton of other features (MORE then Nintendo's VC's did).

I would love original DK and Popeye, but I know they're long shots!

Urban champion is actually a very big deal, since the original arcade game is so ultra rare it's never been dumped! Plus it's considered to be a lot better than the NES version due to the little touches along with it being on a system where the game fits more (with high scores and whatnot)

That being said, the image is of such horrible quality that I can't see the picture of the ACA title screen well enough... but I'm pretty nervous there's no caravan or high score mode from the looks of it

Cool, I wonder what other arcade games might come out.