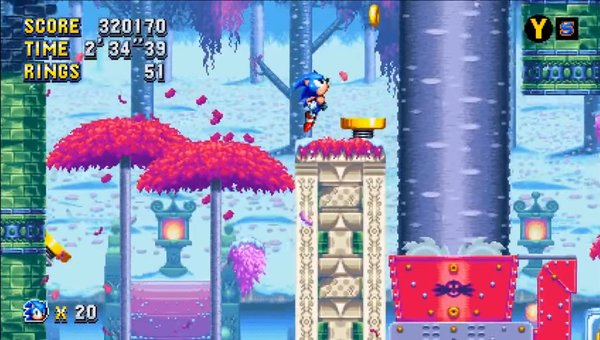 - There is now a separate command for turning into Super Sonic. Triangle for PS4, Y for Xbox, and X for Switch
- Using the Bubble Shield bounce as the second act of a zone started no longer crashes the game
- The game no longer saves your score after finishing a game file. Starting on any level from a finished game file resets the score to 0.
- Some general bug fixes such as glitching into Knuckles' section in Green Hill with Sonic
- The Dunkey easter egg was removed
- Switch home delay has been fixed
- Press Garden Act 2 had a path with a row of 4 ice cubes that you couldn't get past without the fire shield. If you had Super Sonic without Tails, you were locked in there till the Super form wore off. That row of ice cubes has been cut down to two to compensate for that situation should it occur.

I was wondering when this would freaking fracking go live; they announced it last week like it was rolling out asap.

They removed the Dunkey easter egg?! Why?! Did Dunkey not like it?

There's a video creator named Dunkey, and he did a goofy best of 2016 list last year with a bunch of games from the 90's like Sonic 3. At one point while discussing why he likes the game he made a sound as Sonic used a type of speed booster in Hydrocity Zone. Hydocity is back in Mania, so if you had Sonic hang onto a hook and input Left, Left, Left, Right, Right, Right, Up, Up, Up, the game will play Dunkey's sound if you use any of that particular type of speed booster. The code is straight out of Sonic 3, also input while Sonic hangs from a cable, so most long-time Sonic players would think to input it somewhere. It was fun and as a fan of Dunkey personally it made me smile ear to ear. Now it's gone

Supposedly the easter egg was included without Dunkey's permission. It wouldn't surprise me if after the easter egg became known some people might have been accusing Dunkey of being paid off by the devs for his positive review of the game (knowledge of the easter egg came out after Dunkey not only did a review but also did a video criticizing people who he feels are bad game reviewers). I know that's not really the case but it wouldn't shock me if that accusation was floating around, particularly from people who don't like Dunkey.

Gotcha. I guess that makes some sense. I wonder if SEGA or Dunkey will comment on it.

...wasn`t him the guy behind the "My Dream Smash Bros. Game" animation video? That+s literally the only video I can think of, from the top of my head. Has he branched out to do more?

It took too long for such a bug like the home menu.

This patch released last week on PS4. I take it the Switch just got it now?