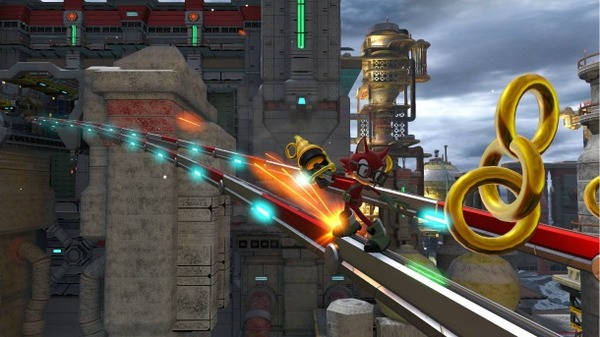 A portion of a Game Informer interview with producer Shun Nakamura...

GI: In Sonic Forces, Sonic loses his rings when hit like always, but he doesn't have the ability to regain them. This is a huge departure from the series' history and seems to go against the notion of classic Sonic. Why make this change?

SN: We realize Sonic Mania came out and had classic Sonic portrayed in the classic world, with the classic gameplay of when you get hit, you lose all your rings and you have the chance to gather them back up and continue running. That was made by a different team with a different design aesthetic of recreating a classic Sonic title. What my team wanted to do with Sonic Forces is really expand on the game design and make something different and new for the Sonic Forces world, which is more modern. When we were designing the game, we wanted to make sure it was balanced properly, so it’s not too easy, but also not too challenging.

Since presenting it at E3, we’ve heard a lot of people ask what you have, and it’s something the team feels really strongly about. They do like the design of Sonic Forces as we have presented it, but we’re also listening to a lot of the people saying they want that classic gameplay element back. We believe what we made [is a good balance] and will be a great experience for people — but we also are hearing that people are wanting something that we haven’t provided to them. I’m still sitting with the team digesting it and figuring out what to do. It’s an unresolved topic even amongst the team.

GI: With Sonic Forces, you're taking a decidedly darker approach than we've previously seen; Dr. Eggman has already taken over and Sonic is leading the resistance. Was this an intentional shift after recent games were more lighthearted in tone?

SN: It wasn’t necessarily that we set out to make a dark world, but when we were thinking about making everything a little more dramatic and making the enemies feel [more like] enemies, what the team really wanted to do was have Sonic as this really powerful, positive character and then have the enemies as these really strong villain characters. What we wanted to do was really make those villain characters feel like villains and to do that we need to see some villainous activities going on — there’s got to be something done to this world to make it feel like Eggman is really taking over and is a threat. By putting Sonic in this threatening situation, it turned out that the world had to become dark and we had to tell this dark story. Perhaps it came to be a dark story because of what we wanted to do with the characters, more so than we [set out] to make a dark story. We really like where the world has gone. Hearing people say that they really like it and that it's different from what we've done in the past makes us feel good, like we're going in the right direction.

GI: You have already announced a couple of different DLC packs (Sega/Atlus pack and Episode Shadow). Do you plan on supporting Sonic Forces long-term through DLC? Will we see actual story content added DLC beyond Episode Shadow?

SN: There is really no long-term plans to continue releasing content to support Forces, but we created Episode Shadow [and the Sega/Atlus pack] for everyone to play and enjoy. We’re trying to get as much content out there for people to jump right into the game and play.

Hooters has Boobs and Wings, the connection makes sense now: Rouge the Bat.

"All the world's diamonds, gems, and boobs are mine!" -Bat-face The Rogue

The loss of all rings is not a new thing. It happened in the first and second Game Gear Sonic titles, and made it so that you couldn't regain your rings even if you land right next to the ones that fell out. I kinda get sick of the fact that Sega doesn't tend to acknowledge the GG Sonics even though the majority of them were better than the Genesis ones IMO in terms of level design, music and control (Except Triple Trouble and ESPECIALLY Spinball, as TT was boring and Spinball GG is the worst game in the franchise)

...Spinball GG is the worst game in the franchise


Even worse than Sonic Labyrinth? Man, that's quite the feat.

I have trouble believing anything is worse than any version of 3D Blast.

Sounds like a good start. If people won't stop complaining about bottomless pits, then this preemptively solves the complaints when the game becomes too easy when you take away the bottomless pits.

I don't know how pit free Forces is, of course, but the ring mechanic has presented a problem to balancing difficulty for a long time.