Nielsen - Most anticipated games of Holiday 2017 includes many Nintendo games 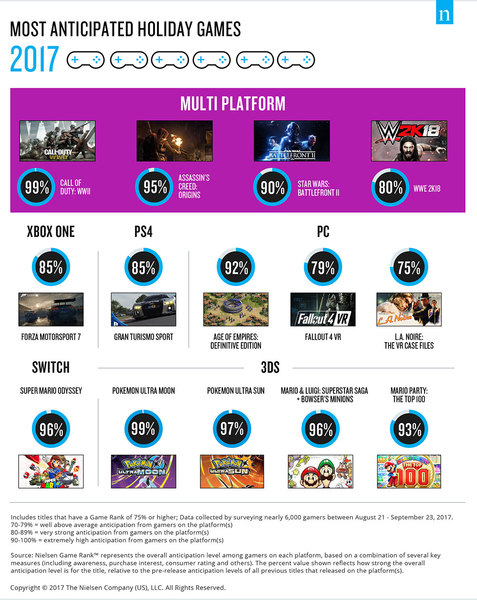 Nielsen has created a list of about 6,000 answers that compiles the most anticipated games that are releasing this holiday season. Some of the top-ranked Nintendo games included Super Mario Odyssey, Pokemon Ultra Sun / Ultra Moon, Mario & Luigi: Superstar Saga + Bowser's Minions, and Mario Party: The Top 100. The website also had this to say about Nintendo's upcoming game release schedule:

Nintendo had leveraged The Legend of Zelda to help launch its new Switch platform earlier this year, but the company is counting on Super Mario to haul in the holiday shoppers for the Switch’s first fall/winter season. Super Mario Odyssey (96%) looks to be up to the task, as anticipation levels among Switch gamers is on par with the high bar previously set by The Legend of Zelda: Breath of the Wild and Mario Kart 8 Deluxe.

Mario makes appearances in a couple of highly anticipated releases this holiday season on Nintendo’s 3DS as well. One is an encore compilation of fan-favorite mini games from the various Mario Party releases, aptly named Mario Party: The Top 100 (93%). The Italian plumber also joins up with his brother for a remake of Mario & Luigi: Superstar Saga + Bowser's Minions(96%), which allows players to experience the game from the perspective of various enemy characters.

God I really wish Battlefront was on Switch. EA is so dumb.

And I only have eyes for Mario. Cause damn that game looks like it's going to be gooooooood.

Pokemon and Mario Odyssey for me.

out of that list only Mario Odyssey for me. BUT I'm getting Fire Emblem Warriors, Super Mario Odyssey, LA Noire, Doom, Skyrim, Rocket League, Sonic Forces, Resident Evil Revelations Collection, and Batman: The TellTale series for Switch this holiday as well.