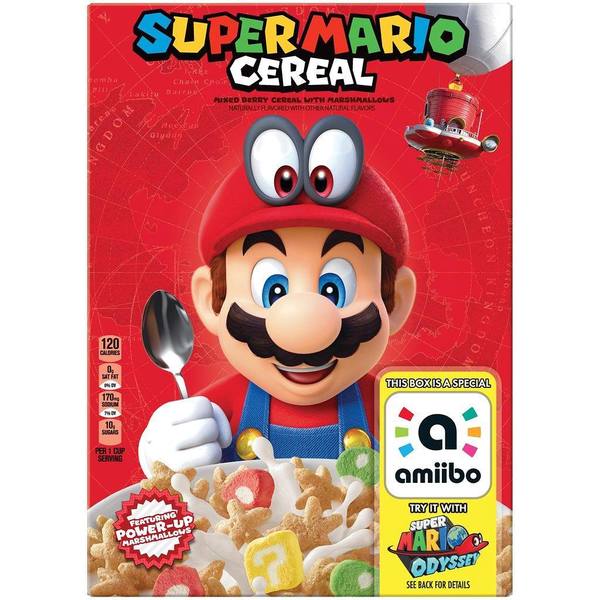 Oh dear lord, PLEASE let this be true! Rumor has it that Kellogg's is coming out with Super Mario Cereal. The cereal includes oat pieces with colored marshmallow Stars, Super Mushrooms, 1-Up Mushrooms, and ? Boxes. Even better, the box itself can serve as an amiibo! This sounds too good to be true, so let's hope it is!

So there's info that points to this both being fake and real. First off, it was posted over on the amiibo subReddit, which some people think points to it being fake. Second, a cereal blog says they've been doing research which points to it being real. I don't know which way to go with it right now!

UPDATE - Looks like we have even more evidence for this being real!

For a minute I thought the cereal was supposed to do something when you put an amiibo on that box.

Are you cereal? I mean super cereal?

That reminds me of the Nintendo Cereal System back in the day... Good times

Real or fake, I love this.

It’s very likely, Kellogg’s tends to do new cereals every season or so with the current flavor of the month. The current one is Minions that launched with Despicable Me 3.

For a minute I thought the cereal was supposed to do something when you put an amiibo on that box.

Now THAT'S a future to look forward to!

"The ? box marshmallows get the color and taste of the Amiibo scanned!"
... Miam! Green Yoshi must be the tastiest. But who don't want to try some Peach flavored marshmallow? :P
Or some squid flavored ones. :O

I want to play as Fruity Sweetened Nutritious Cereal Mario.

"Part of a nutritious breakfast! But, like, the part that isn't nutritious!"

Can't wait to unlock the Kellogg's Kingdom. Toucan Sam would probably replace Talkatoo for that Kingdom.

"Just follow your nose: to an exclusive Kellogg's™ Power Moon!"

I need this in my life.

Nintendo is looking at past ideas and switching them up. Love it!

Will this unlock a costume in Breath of the WIld?

Is it at least part of a complete breakfast?

I want diabetes with my edible DLC!

So, the box would be another Mario amiibo?

They trademark a bunch of Odyssey merch, didn't they? To see amiibo have changed in size greatly here is a bit amusing

If true, it better release here in Sweden so I can buy one and keep it in mint condition.

And buy one and try it out, as I never really eat cerial stuff.

Not a fan of marshmallow cereal but I might still try it.