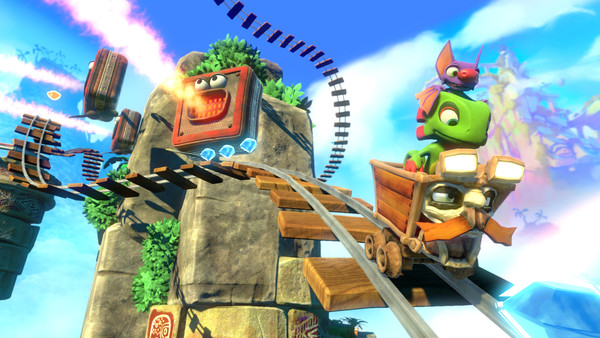 A portion of a Nintendo Life interview with Playtonic...

NL: What kind of resolution can we expect from the Switch port, in both docked and portable modes?

P: We’re running at 900p docked and 600p undocked, while the UI always renders at 1080p, which we’re really happy with and is competitive with other games. This is the balance we’re most happy with, one that still looks great and runs as smooth as possible. Our priority for Nintendo Switch was to deliver players a smooth, optimised experience and we hope they’ll be pleased with how the game looks and runs.

NL: How close will the Switch port be to the Xbox One and PS4 versions, in visual terms? Have you had to make any big graphical sacrifices to get it running on the system?

P: We’ve actually made improvements and this is definitely the most optimised version of the game. Our priority with the Switch version was to deliver a smooth experience for players, so some compromises naturally had to be made, such as comprimises a small amount of resolution for better performance and optimisations. However, it’s nothing that we think players will notice, especially in handheld mode on that excellent screen. In fact, some elements such as shadows are actually improved since the original release! We’re really pleased with how this version is running.

NL: Why digital only?

P: Our aim was to get the game into players’ hands as soon as possible and a digital launch allowed us to do that. We haven’t ruled out doing a physical release in future and would strive to make sure it would have added value which takes time to get right.