Dev behind Doom's SNES port discusses the challenges of the project, content that didn't make the cut 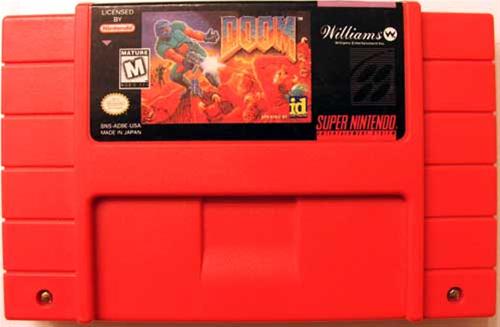 Have you ever heard of Randy Linden? The name might not ring a bell, but he could have very well worked on a big part of your childhood. Mr. Linden was part of the team who worked to bring Doom to the SNES. Obviously the project was quite the undertaking, and all these years later, we finally get to see what working on the port was like! Below are some snippets from a GamingReinvented interview with Randy Linden.

GR: And what was it like being a programmer on Doom? What challenges did you have to overcome to get it working on the SNES?

RL: I started the project independently and demo’d it to Sculptured Software when I had a fully operational prototype running. A bunch of people at Sculptured helped complete the game so it could be released in time for the holidays.

The development was challenging for a few reasons, notably there were no development systems for the SuperFX chip at the time. I wrote a complete set of tools — assembler, linker and debugger — before I could even start on the game itself.

The development hardware was a hacked-up StarFox cartridge (because it included the SuperFX chip) and a modified pair of game controllers that were plugged into both SNES ports and connected to the Amiga’s parallel port. A serial protocol was used to communicate between the two for downloading code, setting breakpoints, inspecting memory, etc.

GR: Any features you wish you’d wanted to include but couldn’t get working here?

RL: Sure! More levels for starters — Unfortunately, the game used the largest capacity ROM available and filled it almost completely. I vaguely recall there were roughly 16 bytes free, so there wasn’t any more space available anyway!

However, I did manage to include support for the SuperScope, Mouse and XBand modem! … Yes, you could actually play against someone online!

Thanks to cm30 for the heads up!
Submitted by: cm30
Source: Link
Rating: 8

Oh man, I wish our Doom 2016 game card was red! And the Zelda card gold... what happened to that?

Awesome to know how far they pushed the hardware. I had no idea it supported super scope and the XBand modem. I’ve yet to try to with the Hyperkin SNES laser mouse and see how it plays.

Uow... never knew it had this many option of play style.... how it works with a Mouse? I still have mine.

XBand on the SNES had a great community. I'm still friends now with someone I met on XBand!

Oh man, I wish our Doom 2016 game card was red! And the Zelda card gold... what happened to that?

I know right? Game carts are getting less colorful and tastes more bitter these days

More variations in the cartridges means higher cost of production. The costs are already high right now. :/ Maybe some years in the future, when the price of memory (and other costs) get down.

Yeah, especially in a world where they ideally want everybody to purchase games digitally, eh? Makes sense.

I feel like I should have seen a video of someone playing SNES Doom using a Super Scope by now if it has always been an option.
Perhaps Sculptured Software removed the feature?

I'm going to have to test the Super Scope on Doom. This is the first I've heard of it and I can't even imagine how it would work.