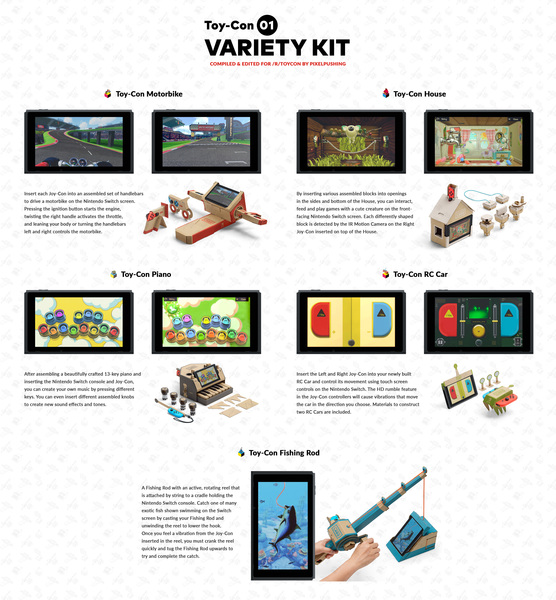 I am so ridiculously pumped for Nintendo Labo. I couldn't hide my enthusiasm if I tried. This document only gives me more excitement for the upcoming kits. I need to get my hands on them now!

3 glorified mini games, a piano app, and an app that makes your controllers vibrate. For $70. I really do love the idea of toy con. But I don't get why people are getting so excited for this. Can someone please explain?

Well people were excited with Wii Sports which has sold like a whopping TON of units and does nearly the same thing as this one only slightly cheaper.

Games appeal to a certain demographic. And in this case, its a good set of games you get for kids to play.

Also, may I remind everyone that this is a game targeted and especially marketed for kids? If I were a kid (which I really wish I were now if you ask me) I'd be totally into this.

Maybe cause some people like the fact you build it yourself and the mini games look fun? Is this so hard to understand? LOL

I think Nintendo Labo looks like a lot of fun! And this is coming from an adult who was never particularly into building things. I never played with LEGOs as a kid or anything like that. But once again, Nintendo has managed to make an activity I previously had no interest in look really appealing. I have already preordered the variety kit, and if I enjoy that as much as I’m expecting to, I will probably get the Robot kit at some point as well, as that looks like the most fun of the mini games announced so far. While this is definitely aimed at kids, and I think they will love it, I see it also having appeal for adults who, in Nintendo’s words, are “kids at heart” or even just creative types that like building things. I also see the huge potential for future Toy Cons, which could far exceed what Nintendo's announced so far.