Square-Enix says The Secret of Mana remake could come to Switch, Seiken Densetsu Collection might get localized 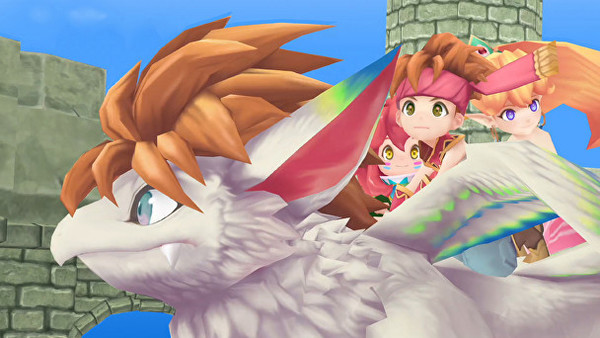 When the Secret of Mana remake was announced, a lot of people thought it would come to Switch. When that wasn't the case, fans were pretty upset to see Switch being left out. Turns out Square-Enix wasn't expecting the response from Switch owners, so now they're considering releasing the game on Switch. This was discussed during a USGamer interview with producer Masaru Oyamada.

"To kind of give background in terms of when the project started, it was about two years ago, and the Switch hadn't been announced. Once we had announced this particular remake title, we were very surprised to see the amount of demand and feedback we received for a potential Switch version."So, the voices are heard, we're aware that people are desiring a Switch version, and we will make an effort to see what is feasible in the future, though nothing is confirmed or planned."

That's not all, though. Over in Japan, the Seiken Densetsu Collection was release on Switch, but it never got localized. With the Switch's runaway success, Square-Enix is at least open to the idea of localization.

"Obviously, our focus is on Secret of Mana since we're in the last part of its development, so obviously it's hard to definitely say that yes, we will release it. But we've obviously heard a lot of demands and requests for that game to be released in the west, and that's something we will do our best to hopefully achieve, but nothing at this moment in time."

Thanks to Sligeach_eire for the heads up!
Submitted by: sligeach_eire
Source: Link
Rating: 12

PLEASE let this come to Switch! So they’ve heard our voices. Time to play the waiting game...

I remember catching the commercial for the original Secret of Mana on TV a few times back in the day. It had the cinematic camera shot of the forest in this fantasy setting; it was dreamy and hard to believe it was for a video game.
These days, Square Enix would prioritize the PlayStation first. It's a no-brainer that this remake should be on a 'tendo system. I just hope they do it physical worldwide, and not just for a single region and digital the rest (like they did with I Am Setsuna). Then we can start thinking of localizing that Mana collection.

With the Vita dying into oblivion everywhere BUT Japan, may be a smart move to capitalize on the nostalgia and the Switch momentum.

its dying in japan too, man..lol

It's slowing to a crawl, but dying it is not. The pattern is similar to the 3DS. Massive active user base, but slowly moving forward. This case it's the Switch they're moving to.

Still don't like how it looks worse than the original.

So they know, but won't act right now. I'll bet they want NoA to moneyhat it all.

Moneyhats are the only reason why we get anything but Final Fantasy from Square these days...

They need to bring the both of them to the Switch in the West. I want them both.

Oh come the f*ck on now. Stop kidding around, bring them on !

God they're annoying. SE have been toying with switch support for way too long. It is 100% obvious that these two for example are perfect fit on the Switch.

MAKE. A. FREAKING. STATEMENT.
Did my point come across ? Geez.

Hooray for both things! Do it, Square Enix!

No more "coulds" or "mights." The Switch is a monster and Mana runs deep in Nintendo history. Get on it.

Those are two things I would 100% get on day 1 if they come out over here.

There's really no need to release the SOM remake by itself. It would be a late port by the time it came out due to the dev cycle and it would be a waste of money to wait so long at that point. I think a bundle with Adventures of Mana would sell a lot better.

As for the Seiken collection, as someone who imported it and enjoyed playing through SD1 (didn't like SD2 and thought SD3 was OK, the bit I could read as it was more text heavy than SD1 which was very readable) I'd be up for an english version as an excuse to play Seiken again and maybe beat SD3, but I seriously doubt SDC will ever come here because of the third game. No way that they would waste money translating a crusty old niche game, when they could give it a pretty remake like SOM and Adventures. I assume if the collection came over they would cut it out as that's the only option that would be likely unless they were crazy and determined.

Yeah, so do it Squeenix, what's stopping you?

Oh right, your own stupidity and arrogance... you're probably waiting for Nintendo to fellate you with money before actually going ahead with either of these.

I'm not that interessted in the remake, because it looks like a smartphone game. But the collection whoa, please SquareEnix, bring that to the west (retail release!!). It woul be my game of the year. Maybe with Secret of Evermore on it :D

Evermore should be bonus content for the western version.

Watch them replace SD3 with Evermore because they're too lazy to translate 3. They would just repeat the whole SD3 debacle of when it first came out. They're very capable of doing this.