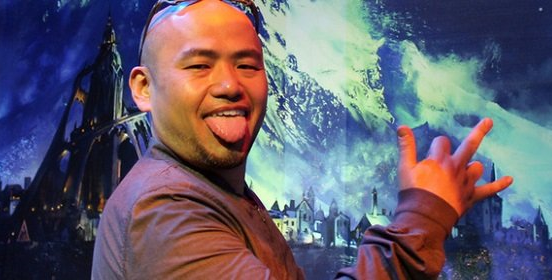 IF NINTY SAY YES, IT'S YES. SO ASK NINTY. ALSO ASK ABOUT MARIO AND ZELDA FOR PS4. GET LOST. RT @Danvertuan: no more bayonetta on ps4?

While Bayonetta eventually became a hit, it wasn't quite a huge success. This blocked the path ahead for a sequel, as no one really wanted to pay for it. That is, until Nintendo came along and made things happen. Now Bayonetta 1 and 2 are hitting Switch soon, and we know a third game is in the works for Switch. Obviously, some fans would like to see the franchise return to other platforms, but as you can see from Platinum's Hideki Kamiya above, that's not going to happen.

Might need to beat people over the head with this.

Then again nice to see the salt will always be passed on this topic.

Bayonetta is more of a Nintendo character than a Sega one nowadays.

With all that Nintendo is doing for the series, they really should try to get partial ownership of it at least... to guarantee exclusivity.

Someone post the gif of Bender laughing, then laughing harder.

This made me do that. I laughed then I laughed harder.

Sorry PS Players, you guys got your own exclusives. Now it’s Nintendo’ turn to get theirs. Lol

While we get the Bayonetta 3 at least PS Players will be getting the first three DMC titles to PS4/XBO so at least they get their share of the action-packed games.

Exactly! Everyone has a chance to play those kind of games and yet PS Players are bellyaching about it.

I don't think they're bellyaching about it. Maybe some people don't realize it but for some people it has become sort of a game to just troll Kamiya on Twitter and get him to reply in an angry fashion. Some people even troll him just so he'll block them, like it's something to be proud of. I suspect that's all this was.

But also, as much as I enjoyed Bayonetta and Bayonetta 2, PS4 gets a new God Of War in a couple months and I'll take that over Bayonetta any day.

God of War is alright, but I much prefer Bayonetta.

Nintendo didn’t even had one exclusive games from a different company. Most games are for multiple consoles that included Nintendo.

Now you're mentioning it has to be a third-party exclusive. That wasn't apparent from your first comment

People need to understand, as long as Nintendo pays for the development of something it's theirs to do with as they please. It would be just as ludicrous to say that PS4 exclusives like Uncharted or God of War should be ported to Switch.

I love Kamiya-san, and his English is so good. Wish my Japanese was just as good.

Nintendo fans have cried for years for some of those third party exclusives to come over to Nintendo systems. How many of Square Enix's titles were released for PS2 and not for Gamecube again? Yeah right. Nintendo doesn't even have that many third party exclusives anymore these days and even when they rarely do, it usually doesn't last, look at Zombi U, House of the Dead Overkill, Friggin' No More Heroes (the original)... Now Nintendo has Bayonetta 2 & 3, they paid for it, they deserve it.

You say that like he ever offers any other type of response.

It's rare, but it happens:

These Sony ponies do not understand why Bayonetta is officially a Nintendo franchise.

Pretty sure at this point most of these "questions" to him are trolls.

While I do strongly agree with the fact that Bayonetta 2 was made possible with Nintendo, I also see why it's disappointing that the Steam PC versions of Bayonetta 1/Vanquish haven't been ported to PS4/XB1 yet, since they would be systems that would benefit from a rerelease so more people can enjoy them.

Bayo 3 I also seriously doubt was in the same situation as the second game (At least Sony would have maybe considered it, surely,) so I can also see why PS/XB fans would feel left out about not getting that game, since you'd think Platinum would be able to have everyone enjoy the game, but I do understand why the second title would be Nintendo exclusive as it is Nintendo Funded. Don't think this was worth bugging Kamiya about obviously, but there is some legit points to fans who at least want to see Bayo 1/Vanquish released on a 4K Console.

Someone still needs to pay for the ports. Bayo 1 came to Wii U and now Switch because Nintendo funded/is funding that too.

Agreed, and I suspect Nintendo probably has a console exclusivity deal with SEGA and Platinum for the first game.

non nintendo fans are to blame for bayonetta not getting it's sequel until nintendo did something. so if you want your precious game to get a sequel on your system, buy the original product.

Other PS and XBox users probably should have bought the original and this wouldn’t be an issue for them. I did, but I also have a Wii U and Switch and like that Nintendo picked the series up.

So...why are people calling them ponies?

WOW. Interest in Monster Hunter World dropped like a rock the moment Bayonetta was mentioned.

Oh well, Capcom got their money regardless of whether the game is actually worth playing over time or not.

Guess that's what happens when you build a fanbase that cares more about what they (or their rivals) DON'T have, than what they do.

That's pretty much a copy paste of his answer to the original Bayo2 meltdown back in the days... xD

Exactly what I thought. I distinctly remember Kamiya saying basically exactly this back then

I fucking love this man.

It's not hard to understand. Nintendo owns the rights to Bayonetta 2 and 3. The original Bayonetta was multi-platform and can stay that way because Sega published that themselves. The Bayonetta IP belongs to Sega but those 2 games belong to Nintendo because they published them.

I think they're just trolling Kamiya at this point. I would personally love for Nintendo to buy the Bayonetta IP (hell, buy Sega itself) and be done with it, but the that's most likely never going to happen. I consider her to be a Nintendo character at this point.