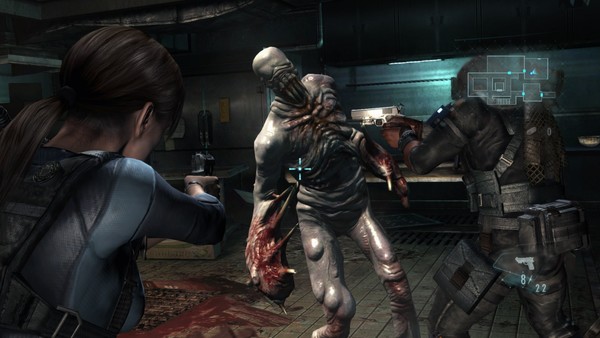 "You're right let's make a bunch more games for Playstation! I mean just look at how amazing Street Fighter V and Marvel Vs. Capcom Infnite have done for us!"

Curious of how many they needed to make a profit of the effort.

"You're right let's make a bunch more games for Playstation! I mean just look at how amazing Street Fighter V and Marvel Vs. Capcom Infnite have done for us!"

Not ashamed to say I contributed to this game for the 3rd time, and that it's actually a really good port! I've beaten all 3 difficulties several times already, and it's portable again, so full circle for the first game. They really need to add the infinite rocket launcher to all non-Jill sections of that game so I can just power through faster, but that's a minor gripe.

Haven't even delved into RER2 yet.

This is a really nice version of the games. Well earned.

I wonder if that's the physical version. I bought Rev 2 digital (cuz that was the only option)

I'm planning on getting it but I'm still bummed that I can't get a physical copy of the package (EU there...)

Also another proof that Capcom has no idea what their audience is.

Exactly. Pretty much everyone else is making the effort. I thought those days were over when japanese teams could not even figure out what the EU market is. That's like Squaresoft back in the snes days constantly making the demonstration that they don't understand their european customers at all. Even freaking Atlus went over this and is now much better with EU than two generations ago. And somehow a big firm like Capcom can't figure it out ? Geez.

I‘m from Europe too actually from Germany. There is a reason why I tell this. Many things went simply wrong with Capcoms european branch, just naming the digital releases of both Mega Man Collections, Revalations for Switch, the huge delays of Resident Evil Remasters 4-6 (their original plans were to never release them physical in Europe) and then releasing them even a little overpriced here. The upcoming Street Fighter 30th anniversary collection will most likely see a digital release in Europe, Amazon Germany already deleted the entry (and we never saw any boxart in the european trailer). Or let‘s take the Resident Evil 7 Gold edition as an example. The German-Austrian-Switzerland version is coming out today, over two months later than the US-Version and the european PEGI-Version.

So it‘s the luck of the dumb that they manage to sell these ports with the most minimal effort. Capcom Europe stated, that there isn‘t an audience in Europe to justify a physical release for Revelations on the Switch. Hilarious.

Yeah what's going on anyway ?
I don't remember them being so cheap with the European releases in previous generations. Is the situation that bad for Capcom ?
The thing is I did not buy Revelation yet even if I was planning to because of this, and I'm definitely getting SF30th IF it's a physical release. Otherwise, I'm not sure I'll bother. I mean why would you buy an entire collection digitally ? I can understand constantly having your favorite amongst these games on your console is pretty neat, typically SSF2 or 3rd Strike, but the whole thing ? How does that make any sense to have three billion different SF games on your sd card ?

Poor Europe. It's insane, it's like the snes days all over again.

Not a bad number at all.

Hopefully they're bringing RE7 over. Wouldn't be too surprised to see it this year honestly!