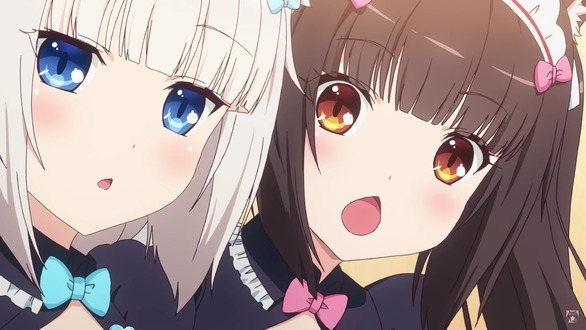 Nekopara is coming to the Switch, which is something a lot of people didn't expect to see happen. Not only is the game coming to Switch, now we know it's going to include some more content as well. The Switch version will have updated graphics, a new theme song, and even new episodes as compared to the PC release.

They should include the short prequel story which was a stretch goal in the anime Kickstarter. And they should also animate it because that was another goal and we came really close to hitting it

I wish it was the full version instead of the "clean" version.
I like having all the content. I know that it's controversial to have blatant uncensored ecchi scenes on a console game, much less a Nintendo console, in these modern times, but the option of keeping or removing that content should be an option for the players to decide, not the corporations.

The full version of Nekopara would likely be rated AO, right? Unfortunately, none of the console manufacturers (not just Nintendo, but also Sony and Microsoft) will permit AO-rated titles on their platforms.

Recall back to the development of Rockstar's Manhunt 2 (Wii, PS2, and PSP). During development, the game got an AO rating from the ESRB, resulting in both Nintendo and Sony blocking the publishing of the title. Rockstar had to tone down the game a bit to get an M rating instead, resulting in both Nintendo and Sony allowing it to be published on their systems (however, an uncensored version was released for Windows).

While I agree, though, that AO-rated games (be it for sexual or violent content) be allowed to be published, and let the market decide whether or not it's acceptable, don't expect this stance to change any time soon from Nintendo, Sony, or Microsoft.

And when a game is also retail, it's even worse, because most of the biggest sales platforms like Walmart refuse to stock AO games, EVEN if somehow a platform holder was ok to let that game be released on their console.

I'm a bit torn on that subject. I'm not against it, and I wouldn't be against it being more open... But I somehow doesn't thrust humanity to not somehow get more fucked-up if this was unrestricted... Like people going crazy on a drinking spree as soon as they are of drinking age and end up in a coma... I've known some people like that, and it was a total "WTF?" surprise for some of them...

I think we still need to mature a lot before we can manage this.

Relating it back to the current topic. This means that for AO games, the cover should be clean, but with the age rating visible. I don't see why this would cause any more problems than games with a Mature rating.

Yeah it has always been a secretitive genre. But that's also the allure of it. Because we don't like to talk about it, yet is as appealing as conflict, love or intrigue. Objectively the main issue is that it's mainly satisfaction, no effort, or deeper thought, pandering as some might say. And to be fair criticism is mainly because it's something intimate and it's not always under the spotlight of beauty or aesthetic. It can also look dirty, miserable or pathetic in execution.

If I may recommend a commentary on the absolute extremes on the matter, Shimoneta comments that repressing the subject can't be as bad as letting it be. Here's a good review of it: https://www.youtube.com/watch?v=Vqx5in6Iv6g

Haha... That was a great anime. :3
Not knowing their body can experience lust and pleasure doesn't mean it won't happen, it means they won't know how to deal with it. :x

You make it sound like that would be much worse than them getting their hands on CoD games and that we definitely should draw the line at a little nudity. I personally think it's worse they get into CoD, less because of the violence, but because of the high potential for high-strung vulgarities and toxicity in the online community

Oh, like that. Well, hmm... I don't disagree with that, but at the same time, it feels stupid the rest would have to pay the price by not being able to get uncensored content on consoles.

Not even Steam allows it, but at least that can easily be patched

Yeah, but Steam MAY be getting more strict about that. I heard a dev say they couldn't distribute a R18 patch publicly because Steam warned them that could make Steam stop distributing the game. Many devs also removed the pinned posts in the communities that had links to the patch. But eh, people will find a way anyway.

Also, that may be my longest discussion I ever had here... We take a lot of space. xD

Oh man, I remember having incredibly, incredibly long discussions with this guy called Kirby__. He was the biggest ass of GoNintendo, and I don't say that lightly.

Man, I really hope Steam doesn't grow more strict. If they need to be strict about something, how about some more quality control for their games? The biggest shovelware is thrown on there at the moment...