HuniePop dev says releasing the game on Switch is "more likely" due to Nekopara paving the way, wouldn't object to censored version 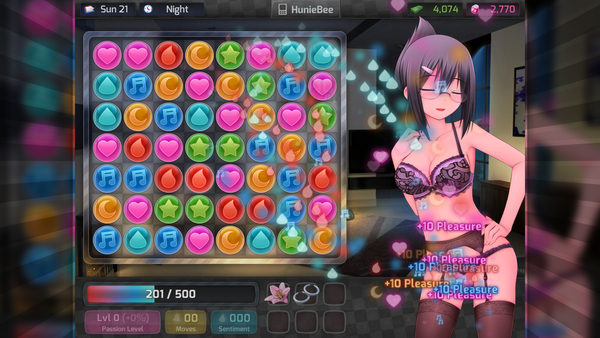 @HuniePotDev With the news of Nekopara coming to Switch and PS4, do you think it’s more likely for Kyu and Co to hit the Switch? And would you still do it if you were told it had to be censored?

To answer the question, yes, I do think that makes it more likely. And yes I'd still do it with the censorship. I'd be a bummer but what can you do? https://t.co/i3IGG8xaKO

Nekopara coming to the Switch raised a ton of eyebrows, as that's a more...let's just say, adult dating sim. Another well-known adult dating sim is HuniePop, which made waves awhile back. While a sequel to HuniePop is in development right now, the dev behind the series seems to be interested in a Switch release for at least one of the games. As he says in the tweet above, if a censored version is the only way to make things happen, he'd be okay with it.

Nekopara being announced for Switch shows that there's at least a chance Nintendo would be open to HuniePop coming over. I don't know that Nekopara is going to see an official release outside of the Japanese Switch eShop, but with the system being region free, anyone can access it. Perhaps the HuniePop dev could do the same for his series on Switch. Release on the Switch eShop in Japan and include an English option.

I honestly never thought I'd see the day when HuniePop could see release on a Nintendo platform. What a time to be alive.
Rating: 7

No one is gonna force it onto your Switch, relax.

No thanks keep this garbage off of my Switch please.

No one is gonna force it onto your Switch, relax.

You don't control me. I'm an adult. Let me decide for myself what content I can access on MY SWITCH.

I have to admit, I honestly found the writing really witty in HuniePop, and I'm a sucker for Match-3 games. Plus I dig visual novels. The sex/nudity just added a surreal/over-the-top element to the game that was worth a chuckle.

No joke, I played this game with a group of friends, both men and women, and we had an amazing time. Tons of laughs and jokes. I know it's not the best couch co-op for most situations, but in the right crowd, it can be a hell of an experience.

I agree, though. I actually really liked HuniePop as well, and I love visual novels. I never knew you were a visual novel fan, though! I thought quite the opposite, in fact

It was fun. I'd probably double dip.

Ooo... that sounds like something from the game. :P

You guys should check out Two People Playing Games walkthrough of this. It's awesome.