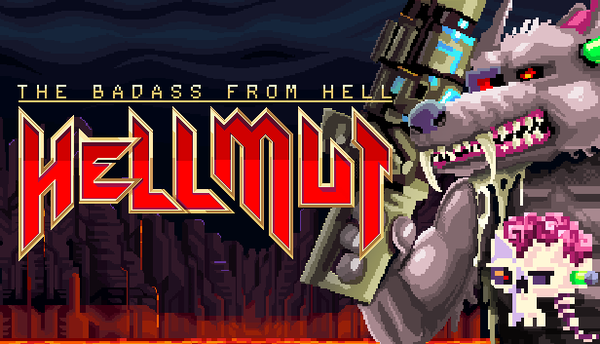 Košice, Slovakia – February 15, 2018 – Publisher Grindstone and developer Volcanicc today announced that their gun-toting, dungeon crawler Hellmut: The Badass from Hell will launch on GOG on 26th of February and on Steam the following day, with Xbox One, PS4 and Switch versions coming out in Q2, 2018. Balancing hardcore roguelike action with a healthy dollop of humor, Hellmut throws players into a gun-blazing bloodbath against an army of Demonspawn, evoking a hellish nightmare that makes purgatory seem like a luxury spa. In order to wipe out the swarming demons, players strategically move through randomly generated dungeons, equip powerful weapons and exploit various Transformations for special abilities.

“We’re only a couple of weeks away from the final launch and can’t wait for Hellmut players to engross in the hardcore diabolical action”, said Peter Nagy, CEO of Grindstone. “Don’t let the humorous side of the game fool you as you’ll need to brush up your skills if you want to make it out alive in this intense roguelike experience!”

“We are very grateful to our community for helping us shape Hellmut into one badass dungeon crawler”, said Lukas Sedlak from Volcanicc. “We plan to continue the development even after the official launch on PC and bring the game to more platforms as well as introduce new features.”

In Hellmut, players unleash an infernal bullet-storm onto hordes of Demonspawn and savage bosses in a randomly generated environment, collecting their souls, coins and weapons, and aiming to perform sweet ‘demonocide’. In between fast-paced play sessions packed with action, players unlock permanent and temporary Transformations, allowing players to control such ludicrous monstrosities as the Rat King, the mighty spell-caster Orc Fairy, and many more, each countering different enemies with own brutal play style.

Hellmut is available for pre-order on GOG.com for €14.99/$14.99 with a temporary 10% discount, granting players an exclusive weapon for free - GOG Galaxificator.