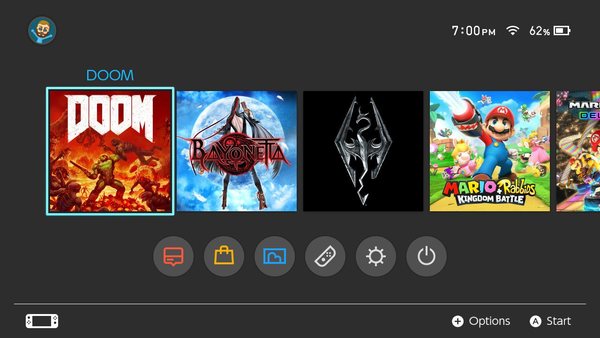 A few days back, the official Doom Twitter account said that an update was coming to the Switch version with a whole bunch of fixes. We don't know if this is that update, but an update is indeed available. While we wait for official patch notes, we know this update adds in gyro aiming and a new icon!

Wow, lack of gyro aiming was one of the bigger gripes people had about this port. Awfully cool of them to add it in, even if a bit late.

Now I'm REALLY interested in buying the game. Screw the analog stick for looking. Gyro/mouse is where it is at.

I bought and played the game at launch, and while the game was pure fun as is, I spent the entire time wishing there were gyro aiming, because dual analog controls just aren't that good (neither am I, to be fair) and it feels like they have to be overcome, when it should be that the controls get out of the way and only the game itself has to be overcome. I found it easier, when my aim was slightly off, to correct it by moving via the left stick instead of by actually changing my aim via the right stick; analog sticks just don't have enough range to allow both precision aiming and quick perspective changes like turning around. I'm tempted to replay the game after the update, although what I'll probably do is wait for Wolfenstein, which will undoubtedly also include gyro aiming too.

I personally like the combination. The quick turning with the analog stick, and then when you have something in your field of vision, use the gyro for precision aiming. It can be a bit awkward to do a full 180 turn with gyro aiming

Now I'm really glad that the recent playthrough I only got like an hour into was put on hold, this update was very much worth waiting on.

Holy cow! I this is going to push me over the edge. I’m definitely buying this now!

I skipped it when it came out after I heard it had no gyro aiming. (I can’t go back to twin-stick after Splatoon 2)

Now I’m definitely getting it!

I’m interested in seeing how its implementation feels. I’ve heard many make a statement akin to “yeah it works in Splatoon but you can’t just shove gyro-aiming into a game not designed around it.”

Footage of someone using the new aiming.

thanks for that. I'm so buying it now. what a great update

That's great but it would have been better if they'd been available since launch.