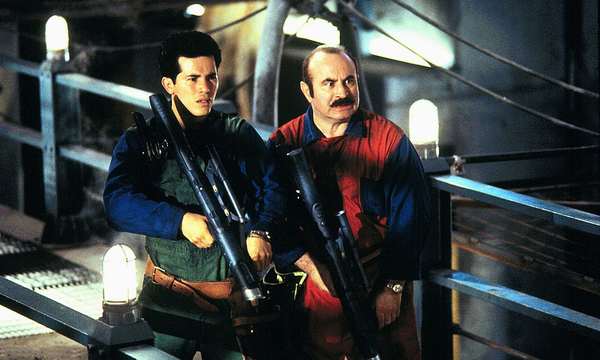 Barry Morrow is the man behind the original story and screenplay for the 1988 Best Picture, Rain Man. At poine point in time, he was also a writer tied to the Super Mario Bros. movie.

Yes, believe it or not, the main force behind Rain Man was almost the man to bring Mario and Luigi to the silver screen. Morrow penned a version of the script that is described quite similar to Rain Man. So much so, that the production staff actually nicknamed the draft Drain Man. Morrow's treatment saw Mario and Luigi head out on an existential road trip, where Mario was the brains and Luigi was a savant.

When that script was shelved, the team of Jim Jennewein and Tom S Parker tried their luck. The two had previously worked together on The Flintstones and Ri¢hie Ri¢h. Jennewein and Parker wanted to create a fantasy movie that took place completely in the Mushroom Kingdom. Unfortunately that draft was ditched as well.

This takes us up to the adaptation that actually made it to theaters. Makes you wonder why the other two versions were shelved in favor of what we got!

Thanks to HourlyTerrier for the heads up!
Source: Link
Rating: 3

I love the Super Mario Bros Movie for its quirky weirdness but it admittedly reeks of B-Movie cheese. The historical lore behind the movie is actually more interesting than the movie itself though.

From the writer of Oscar winning Rain Man to the script writers of trash The Flinstones and Richie Rich instead. Just another example of how this movie went wrong.

I really liked the flinstones lol

Well, if you read a bit more past that, you can see they scrapped that script too. The writers are credited as: Parker Bennett, Terry Runté, and Ed Solomon. The latter is the writer behind the Bill & Ted series of movies...

Knowing all the turmoil that went on behind the scenes in this film makes me have more respect for how it turned out in the end. I enjoy visiting this film from time to time. It's stupid and doesn't really feel like Super Mario but I like it.

Yeah the fact it even released is an achievement

Okay I had no idea they covered this. I have to check it out thanks ^^

I have to admit I have a soft spot for this movie but yeah, knowing the guy behind the scenario is the guy form Rain Man is really weird. What happened ? ^^