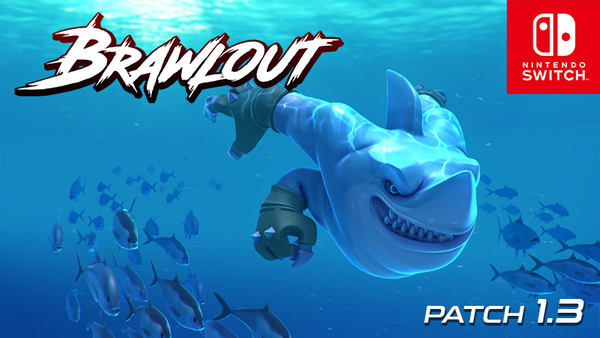 The Oceanic Enforcer is the first Paco Character Variant, with his own special attacks and a slick new flow!

Take part in online 1v1 Ranked matches and keep progressing from one competitive tier to another. Match up against players your skill!
Ranked matchmaking uses the game’s “Competitive mode”, removing the knockback bonus from Rage Mode, making it a purely defensive mechanic.
Players start at 500 ELO points. The amount of ELO won or lost is determined by how large the difference in rank is between the two players.
Players who leave matches early in this mode will be penalized with a loss of ELO and their opponent being awarded the win. This is the only way below the 500 ELO starting point, eventually putting habitual quitters into their own skill tier below the starting point.

On the harder Arcade Mode difficulties, your extra opponents are now on staggered respawn timers, rather than fighting you at the same time right at the start. Defeat your opponents quickly or risk being overrun!
Players can now play Arcade Mode while matchmaking

Dash dancing has been added! There is now an initial dash window where players can change direction immediately with no movement penalty like skidding or pivoting. Use it to bait out attacks or quickly adjust your positioning. The distance you can dash dance is specific to each character, so hit up practice mode and try it out with your favorite Brawlers!

Rather than immediately spawning mid-stage, players now fall as a comet from the top of the screen and are able to steer it as they fall toward the stage and can break out early at any point by pressing a button.. Players who break out of a comet have a very brief invulnerability window, so make sure you choose where you break out carefully to maximize your comeback!

We’ve made some changes to the knockback formula to make certain characters’ trajectories more predictable.
Certain characters (most notably Apucalypse, Condor X) previously could be launched notably further horizontally than vertically. Total knockback distance is no longer influenced by direction.

The inputs for wavedashes has been reworked to prevent accidental rolls and allow players to jump out of wavedashes/lands.
You have 4 frames (while in jump start animation) to press Dodge to enter a wavedash. The input timing should feel familiar to players of other platform fighters while still being easy to pull off for beginners.
Pressing an attack while holding side dodge will now trigger an attack rather than a dodgeroll
Pressing an attack when in jump start animation will now buffer the attack, causing it to come out the first frame after you leave the ground.

You can now view other players’ profile from leaderboards or online replays
This gives you access to in-depth stats on their mains, win ratio, win streaks and others
Players can now navigate menus with the Dpad

Added the ability to share stocks with teammates when one player is out of stocks.
Stock sharing can be disabled by the host from the match options screen.

VANDAL
Fixed a bug where Valdal could not use his recovery until he touched the stage after respawning.