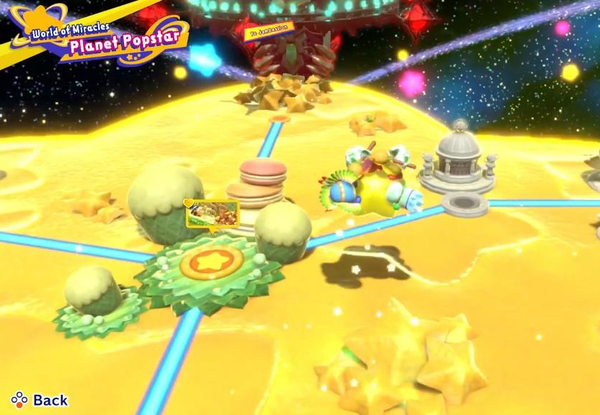 Kirby Star Allies handles the world map quite differently from the rest of the Kirby franchise. You can freely move about the map, exploring areas you would normally only be able to see. Why was this change made? Kirby Star Allies sequence director Tatsuya Kamiyama explained the decision in a Switch news post.

“… Another thing you’ll notice about the World Map this time round is that you can move freely around it, unlike the game board-style maps used in many recent games in the series. The game board design allowed players to progress easily and automatically with a flick of the control stick, and allowed for a more reactive camera angle. So why go for free movement in this game?

A major factor in this decision was the higher resolution on Nintendo Switch, which gave us a wider range of expression and made it easier to show more of the surroundings. Higher resolution meant we could display Kirby better at smaller sizes, so we had lots of space to broaden the scope of the map. WIth a wider scope, you can see more locations on the screen, meaning that the player won’t get lost, even given free movement.

With Nintendo Switch, we’ve moved away from rail-based movement to something freer, so the player can go directly wherever they want to go. They can get to and from the Dream Palace more easily, too. I think it really adds something to the experience that Kirby can roam the map at will with his loyal friends by his side.

We also experimented with other new ideas. In previous titles, moving to a new world meant progressing to the next World Map. This time, however, the world scales up as you progress through the story.

To give the player more of a sense of the growing scale of the story, when the world changes, Kirby rides a warp star and the camera becomes movable, changing the feel of the controls. The first time Kirby leaves Planet Popstar I want it to feel like he’s heading out a journey to a wonderful new world.”

I can't shake the idea that perhaps these menus were also developed as the foundation of a new 3D Kirby game. Either way, it was interesting traversing the world map in a new way in the Kirby franchise.