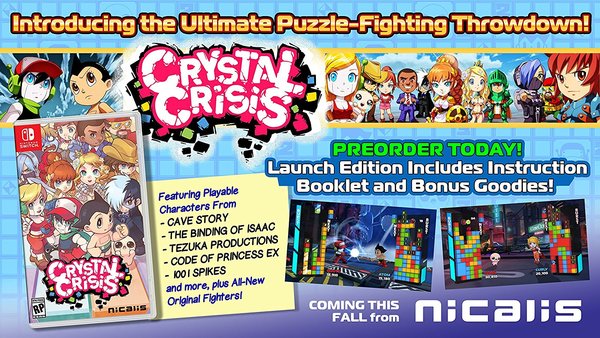 An all-star cast of heroes has gathered to test their mettle in Crystal Crisis, a cute and chaotic new color-matching combat game for Nintendo Switch. Crystal Crisis is presented like a one-on-one fighting game, but instead of pressing buttons to kick and punch, players arrange falling gems into matching colors to clear them from the screen and inflict damage on their opponents. It's the ultimate puzzle battle throwdown! Introducing the ultimate puzzle-fighting throwdown on Nintendo Switch featuring playable characters from Cave Story, The Binding of Isaac, Tezuka Productions, Code of Princess EX, 1001 Spikes, and more. The Launch Edition includes a full-color instruction booklet and bonus goodies to be revealed later.