RUMOR - Pokemon Switch to be formally revealed this month 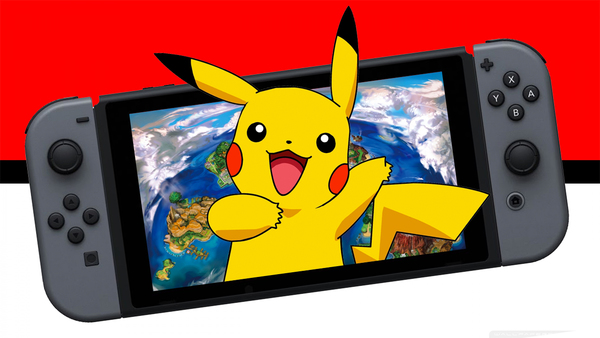 We all know there's a Pokemon game coming to Switch, but what will it be? Looks like we could be getting that info this month, if the latest rumor is to be revealed. The latest claims say that the titles will be revealed sometime before the end of May, and yes, there will be two versions of this Pokemon Switch title. On top of that, supposedly the naming/branding of these titles could end up being quite a talking point.

While Joe Merrick can come off as a bit abrasive, he is a pretty major authority on Pokemon. He doesn't promote rumors and speculation and tries to keep people's expectations and wild rumors in check. It's understandable since he is likely bombarded with fake "leaks" all the time and he's responsible for the largest pokemon fan site, so he feels he needs to do his best to guide the community away from getting swept away with fake rumors and getting their hearts broken every time an "open world mmorpg" pokemon isn't announced at every freaking direct.

You'd be a bit abrasive if you had to be the one to try to reign in expectations around fake rumors all the time too.

That Gold & Silver so no.

What about diamond and pearl?

Emily Rogers is the source. Straight in the bin. And Joe Merrick aka Serebii is also mentioned, a conceited, arrogant, obnoxious thinks he knows it all *****.

While Joe Merrick can come off as a bit abrasive, he is a pretty major authority on Pokemon. He doesn't promote rumors and speculation and tries to keep people's expectations and wild rumors in check. It's understandable since he is likely bombarded with fake "leaks" all the time and he's responsible for the largest pokemon fan site, so he feels he needs to do his best to guide the community away from getting swept away with fake rumors and getting their hearts broken every time an "open world mmorpg" pokemon isn't announced at every freaking direct.

You'd be a bit abrasive if you had to be the one to try to reign in expectations around fake rumors all the time too.

I know him and he knows me away from Pokemon on other sites, I've interected and had countless discussions with him over the years, I can't stand him.

Anyway, back to the rumour, it doesn't commit to anything apart from saying it'll be shown before the end of May.

Edit: Pokemon is its own thing, it was never going to be revealed at E3. So you've got the rest May and the start of June for the announcement. I'm not a Pokemon fan and I'm hearing bits and pieces leaking out in the past week or so, e.g. that there's 2 versions, one being based off Jormungandr, the Norse mythology sea serpent and how it'll be the first poison based legendary Pokemon. Maybe they'll reveal it soon before it's spoiled by the leakers.

May you please share where you read about the Norse sea serpent?

Which kind of ties in with other rumours, including this: It's more legit than anything Emily ever spouts.

You do realise that she "spouted" some rumors that turned out to be completely legit, right?

Despite the fact she got almost every rumor of System Updates correct and people like Liam often can verify her sources? Compared to random 4channers or folks like Marcus Sellars her credibility is really high and not really worth ignoring on that alone. Heck, even the Mother 3 thing people in the rumor community agreed was true, but a thing that got shelved due to the state of Wii U VC

Thank you very much!

Oh, man. Looks like Emily Rogers was wrong yet again. When will she learn to not spread wrong information on the internet?

Tired of the Gen1 pandering and apparently this game has learned things from Pokemon GO makes all this sound disappointing if true. The only good thing is that it means Gen8 is next year.

Yeah, the generation one pandering has just gone overboard at this point. At one point I thought it would be neat to see Kanto reimagined, but right now I just want GameFreak to cool it. Sun/Moon only having Alolan variants for Generation I Pokemon was just ridiculous, among other things.

Yeah the Alolan variants only being Gen 1 Pokemon was too much. If this rumor is true, it would be nice if there are Kantonian forms of Pokemon in this game, but I really doubt it. I also really doubt they will include the Johto region even tho there's no reason to not include it. Can't wait to see wait dumb in-game reason we can't travel to Johto.

Edit: It seems there are some hints that Johto will be in the game due to a "Let's go to Johto" merchandise. If Johto is also in the game, I will feel a lot better. (and hopefully regional forms)

A new game in the Kanto region would be nice, doesn’t have to be a remake of Red and Blue.

I know this is unlikely but please don’t introduce more Pokemon. There’s already too many and so many garbage forgettable Pokemon. There needs to be a cull.

Each new generation also just rehashes the same clones - starter clones, bug clones, bird clones. There’s a good 20-30 in each Gen that are just reskinned from the previous.

As much as I trust Serebii, Emily Rogers has been shown to be a fraud time and time again. This is a garbage post and should be removed IMO

She also provided quite a lot of info that turned out to be true.
That's how leaks work. I don't get why some think that once someone's info didn't turn out to be true they're a fraud. Some things don't happen at all, others are purposefully false, leaked by the companies themselves. Pretty much every reliable source messed up at one point or another. Remember that time when MOTHER 3 was totally coming, with major sites reporting on it, people from the community being optimistic and all?
It's impossible to realize what's true and what's not sometimes, and I don't get why people are mad at specific people for it.

Not just that but she's just regurgitating a rumour that's been reported from multiple sources for some time now. "Pokémon Switch will be revealed in May" has been talked about in the Pokémon fandom for a while.

Some people are just going to act as if Emily was the source of this info when she wasn't and it wouldn't be the first time that she's been "right" by reporting already known rumours/leaks.

someguywithdumbhair Apprentice
Tue May 15 18 09:00am

That's two people (to my knowledge) saying Pokemon Switch is being revealed this month, not at E3. Dasvergeben (reddit guy who started the Starfox Grand Prix stuff the other day and has had some other stuff here and there, along with some bad info from bad sources, such as people claiming to be former Bandai Namco employees when they aren't) also claimed Pokemon Switch is being revealed this month. He also claims that it IS indeed a Kanto game.

I am really excited; the feverish hype is so much fun! Thanks for sharing!!!

Hmm...interesting...this just leads me to ask the question of...if they are so confident of their E3 showing that they can afford to drop Pokemon BEFORE E3...oh my...what exactly their presentation is going to be??? Sure, maybe Pokemon is its own thing...but they did show fit to announce Pokemon Switch AT E3 last year..and if they feel they can afford to leave it out now because they have so many other announcements? Me likey!

I just hope that visually this goes above and beyond the 3DS games and doesn't just look like an HD version of those. No reason for it to. Battle Revolution still looks great- that's the benchmark they should be working towards.

I know it's a superficial thing but honestly you can pick out any Pokémon game from the last 10 years and have as good a time with whichever you pick. They've pretty much perfected the formula a long time ago to the point where for me the only thing that's gonna get me interested in this is if it is the fully realised console Pokémon game myself (and countless others) have dreamed of since we were kids. Huge 3D world to explore, great looking fights etc. Fully prepared to be disappointed but this is one of the biggest (the biggest?) game franchises in the world- there's no reason for them to hold back.

You know what I want Pokemon to do? Start over. I don't want to be filling a Pokedex of roughly 1000 animals in a new area. What if they made a game with 200 brand new Pokemon, and maybe just kept Pikachu and a few other popular ones? I know some people would be upset to lose their favorites, but it would be so much less convoluted and intimidating.

Well, whatever they do, I hope they really do overhaul the game the same way Zelda was.

Isn’t that what Sun and Moon was?

I agree that I don’t want more Pokemon. It’ll cross 1000 soon.
I wouldn’t be against a new adventure in Kanto. Doesn’t mean it has to be a remake of Red/Blue, not does the map need to be a 1:1 recreation. More like how Ocarina of Time and BOTW both take place in Hyrule but it’s a very different map.

Would be amused as heck if all these Kanto rumours turned out to be bull.

Spoiler
Still believe this is Gen 8 myself

Why can’t it be both? New Pokemon in a familiar region.