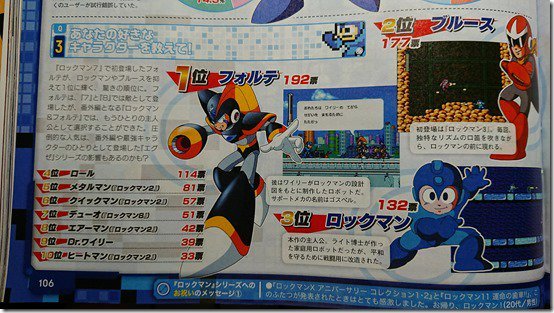 Famitsu recently conducted a survey about the Mega Man franchise, and 1,473 Japanese people participated in answering. Here are the results of that survey.

- a majority of people started playing the franchise with Mega Man 2
- Bass was the most popular character, with Protoman coming second, and Mega Man coming third.
- the favorite stage out of the Classic series was Gravity Man’s stage, with Snake Man’s and Quick Man’s stages following
- Quick Man’s stage was voted as the hardest to beat, followed by Guts Man and Wily Stage 1 from the original Mega Man
- the ‘hardest boss to beat’ was Yellow Devil, followed by Quick Man and Wily Capsule from Mega Man 7.
- Metal Blade was the winner of the ‘Favorite boss weapon’ question, though Pharaoh Shot and Slash Claw were popular too
- one question on the survey was ‘What you would advise Dr. Wily to do if you were his assistant’.
- fans suggested all the bosses fighting Mega Man at once, using more spikes, and making bosses out of Met helmets

The survey also looked at 2,603 people who responded from outside of Japan, with most living in North America.

Wily Capsule from Mega Man 7 is objectively the hardest boss in the entire classic Mega Man series. That said, I love fighting it.

All that Bass love but no mention of MM&B?

Oh, I mentioned it specifically in my survey.