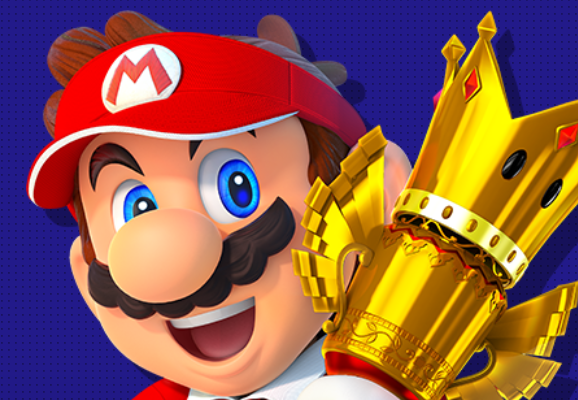 - story begins on the day of a certain tennis tournament
- the power of suspicious rackets wielded by Wario and Waluigi starts to cause a problem
- this leads to Luigi, Wario and Waluigi suddenly disappearing
- according to Toad, the rackets Wario and Waluigi held are said to have terrifying powers that can control people
- if the racket’s mystery can be solved, there may have been a clue to find Luigi

- numerous missions will block Mario’s progress
- sometimes you’ll need to complete certain requirements other than just simply winning battles
- this includes aiming for a specified place on the court or beating the enemy within the allotted time
- stages have different gimmicks as well
- some stages have strong enemies that use special attacks and cannot be hurt with ordinary attacks
- win missions to gain experience and raise Mario’s stats
- clearing missions may also reward new rackets
- having all rackets broken during a mission will cause a Game Over
- missions have varied difficulties, from easy to advanced

- The rules can be freely set. Has up to 4-player versus.
- Settings like CPU difficulty, court, and K.O. option can also be changed.

- If you bring Switch with the game, you can have versus on a local connection with up to four players.
- You can choose between 1-vs-1 singles and 2-vs-2 doubles.

- You can connect to the internet to fight rivals and friends alike.
- You can play for free until September 2018; after that, you will need to subscribe to the paid Nintendo Switch Online service.

- A mode where all players join a tournament and aim for the top.
- Toad will provide live commentary which will hype up the battles.

- Online tournaments, where you fight for ranks with worldwide players, will be held monthly.
- You can take on the tournament multiple times, and the rankings will be set based on the points earned.

- Aim for conquering the top of all three tournaments available.
- Initially you’re only able to access one tournament, but you’ll be able to challenge more difficult tournaments by becoming the champion.

- You can freely swing the Joy-Con to play with actually feeling the shots.
- Recommended when you just want to have fun with everyone.

One Point Advice: Try playing by changing the rules

- In Free Match and Swing Mode, you can enjoy tennis battles with more rules other than standard.
- You can choose a big tennis ball which will move more slowly and is also easier to be hit by the racket.
- You can also go with simple rules in Free Match, where matches don’t use energy and will fully rely on your tennis skills.