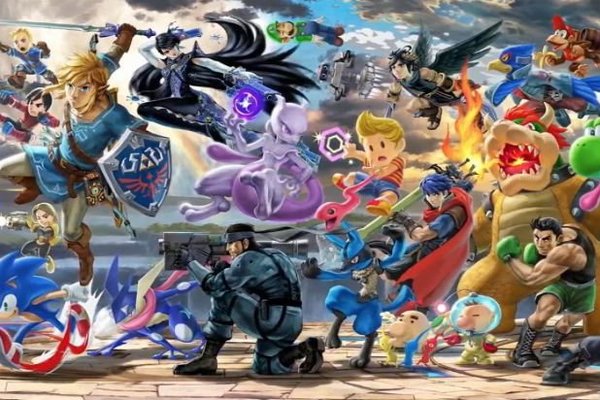 A portion of a Nintendo Life interview with Nintendo's Nate Bihldorff and Bill Trinen...

NL: Are there plans to either announce characters between now and December or is the finalized, complete roster? Can we expect to see more at a later date?

Trinen: We can answer that when we get closer to December.

NL: Will there be DLC? Are there plans to expand on the game after release?

Trinen: The thing about us, when it comes to something like DLC, we don't really start on it until we have got the game done. So, maybe when the game comes out they will make a decision on if they will do it, or if they do what they want to do, that sort of thing.

It's closer to December.

It's closer to December.

Same response they always give to dlc. Good to know that we can expect a few more fighters though! I know it was to be expected, but confirmation is good.

I can’t remember if Smash Wii U had paid DLC?
There’s no doubt Smash Ultimate will have DLC but the question is if it will be paid or free.

WHAT!? How do you not know Lucas, Roy, Ryu, Bayonetta, Cloud, Mewtwo, and Corrin were paid DLC? They were all $5 a pop! Do you think they were all newcomers in Ultimate?

As for DLC for this game....I hope there isn't any. Smash 4's DLC was a little too pricey if you wanted everything and this game already has 65+ characters and over 80 stages it doesn't need it. This already feels like the definitive Smash and please can we give Sakurai a rest? He's been working on Smash non-stop since 2013. I guess I personally will be okay with like Mii Costumes or something since I never play as Mii's, and they're relatively easy and cheap to make and the only Mii Costume I bought was K.Rool just to show support of my favorite Nintendo Villain.

Though part of me knows Nintendo knows how much money Smash DLC will bring in ESPECIALLY on Switch. But on the other hand we've gotten paid DLC for games I never would've expected to get it like Pokken Tournament DX or games where I thought Nintendo WOULD make DLC for like Super Mario Odyssey but here we are with no new Kingdoms/Moons...

I just couldn’t remember if they were free DLC or paid....sheesh...sorry!!!

please can we give Sakurai a rest? He's been working on Smash non-stop since 2013.

Ya know hundreds of people work there asses off for those games. Why does the world act as if it’s single handedly done by Sakurai and only Sakurai? Yeah he gets heavily invested (yes it affected his health), but he’s not the only one making the game. Kudos to all the other developers too

Nintendo could go either way with DLC for Smash. I didn’t think Mario Kart 8 DX would get anything but we just got a free Labo update.
Zelda of all things got paid DLC and some freebies, as will Xenoblade. Splatoon 2 gets paid DLC. But then yeah Odessey has only had costemic costumes. So there isn’t 100% consistency.

Do they treat Smash Ultimate as a definitive version with minor free updates like Mario Kart or do they crank out a few more characters to renew interest in the game every few months and get the conversation back to Smash?

I think people say "Sakurai" as a kind of all-aropund way of saying "Sora, Namco and Nintendo's joint development team"

Not trying to bitch at you, cos I've kinda said the same thing before "why do people just say sakurai hurr", but among my pals we just say "Sakurai's team" as opposed to all of what the Smash dev team really consists of.

I bet all my money that they are planning DLC for it. WiiU Smash had quite pricey DLC and a ton of people bought them, they are definitely going to do the same here. No way they are passing a chance like this.

smash 4 is basicly pay to win since the last couple of patches, and i think that's the route they are gonna go with ultimate too (cloud and bayonetta, last characters released, won tournaments in a over year old game just week one, and still does win a lot of the stuff, they close to completly invalidated the best characters that were before them and rewrote the metagame single handily).

I wish all video games will go back to being packed with unlock-able content instead of having to pay for DLC.

Which would likely result in either A) longer production time and higher base cost or B) less content. Even if you got your wish, you're likely still not winning...

Just a reminder, the Smash DLC cost so much because between 2-3 companies had to be paid along with licensing and other things.

It's the main reason why Third parties cost more, as an example.

If Waluigi is announced...it will break the internet for sure...i hope h does, just to see the react videos

Don't need that Toad molesting trash character stinking up the roster before we even have Simon Belmont.

I don't think they should be doing dlc with this game.
I mean if they do have let's say about 5 to 8 new characters, that's already great. We don't need more. We have two so far with Inklings and Ridley. Maybe we'll get 5 or 6 more but that's probably going to be it.

I agree with that. Nintendo and Sakuray should move to the next game. Everything what they can't put in the game, they should put in the next Smash game.

Sakuray and the Nintendo employees should don't waste time with DLC and make a different game. Like a new Kid Icarus.

If it is free DLC count me in, but I don't want to have to pay for new fighters again.