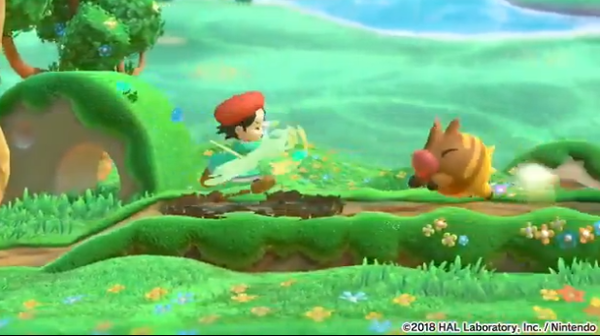 Level design director Yuki End has shared a feature in the Switch news section about the upcoming Kirby Star Allies update. In his feature, he talks about the inclusion of Adeleine and Ribbon as Dream Friends, and details their new moves. We also learn that Kirby 64: The Crystal Shards stages are going to be included in the update, available to those who complete the main story. Check out the full feature below.

In addition to Daroach and Dark Meta Knight making their entrance with the second free update, there is, in fact, another Dream Friend duo ready to enter the spotlight: a pair whose presence has been long missed, it’s Adeleine & Ribbon from Kirby 64: The Crystal Shards!

Adeleine has the ability to bring anything that she paints to life, and Ribbon the fairy possesses a mysterious power that allows her to fly. These two have a really dedicated, long-time fanbase. Back in Kirby 64: The Crystal Shards, they played an important role in the story, but you weren’t able to control them yourself. Now that they’ve become Dream Friends, they can be player-controlled for the first time ever!

Adeleine and Ribbon fight using their unique powers, occasionally joining forces. Adeleine relies on the power of her paintings to attack. It’s far more potent than Kirby’s Artist Copy Ability, so expect to see some moves that will really color you impressed. More details on that later!

And then there’s Ribbon. She shares her power with Adeleine so they can glide through the air together. Sometimes they even team up to unleash a combined attack!

Just like in the original game, they don’t have much in the way of stamina, which can make their adventure particularly tough. Still, they’re an interesting duo – all it takes is a few brush strokes to turn the battle around! With the power to create all sorts of paintings and a unique ability that stands apart from the rest, they really are a true “dream” friend.

What’s more, if you play with Adeleine & Ribbon as Guest Stars after completing the main story, you’ll get to take on brand-new maps! Have fun painting your way through classic Kirby 64: The Crystal Shards stages specially arranged for Kirby Star Allies. There’s a very memorable map at the end which fans may remember, so look forward to that!

The update will be available for download on July 27 – not long at all!

YES! More levels! This is exactly what I wanted from these updates! Thank you HAL!

I love the continued support and fan service that we get from Nintendo. This is definitely enough for me to jump back into this game!

Is this the first update with levels?
I liked the game, but it was really short.

Does this mean pseudo-3D gameplay???? Probably not but still great to have new stages

K64 is secretly the third best Kirby game. Don't @ me.

Mostly, I'm just curious what you think the other two best Kirby games are. Calling something the best is pretty normal, but calling something third best implies two better, and that's just a story waiting to be told right there.

"What’s more, if you play with Adeleine & Ribbon as Guest Stars"

I don't know, it kind of sounds like the other guest star modes to me. It could possibly be referring to the entirety of the guest star run as opposed to the few levels the last three dream friends got. Hopefully we do get a separate level pack, but I'm doubting it.

The new stages will get me back into the game. Even though all of the new Dream Friends there adding are cool never saw much reason to play the game again just for them after getting 100%.